"Do the Right Thing and Speak the Truth" 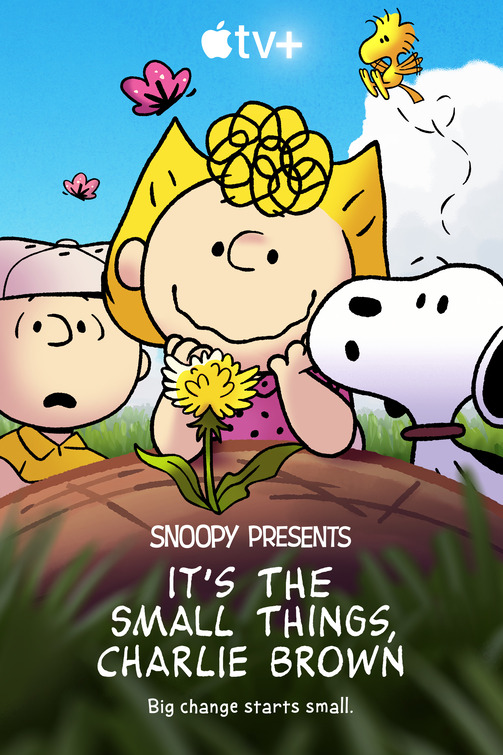 IT’S THE SMALL THINGS, CHARLIE BROWN is a cute, amusing animated comedy on Apple TV+. Charlie Brown believes this could be his team’s year to beat Peppermint Patty’s baseball team in the neighborhood baseball game. However, his sister, Sally, bonds with a yellow dandelion flower right on top of the pitcher’s mound. Charlie asks Sally to move, but she refuses to budge. With Lucy’s help, Sally’s stand attracts support from all over the neighborhood. Peppermint Patty tells Charlie his team will have to forfeit the game if he can’t get the people to leave. What is Charlie Brown going to do?

IT’S THE SMALL THINGS, CHARLIE BROWN is delightful, charming and funny. The antics and conflicts between the children are amusing. Snoopy and his little bird friends are adorable and hilarious. IT’S THE SMALL THINGS has a strong moral worldview. It promotes standing up for your beliefs but also speaking out about the truth. It also extols doing the right thing and making the world a more beautiful place. Eventually, the conflict between Charlie Brown and Sally is solved by love, repentance and forgiveness.

(BBB, C, P, E, V, M):
Dominant Worldview and Other Worldview Content/Elements:
Very strong morally uplifting worldview promotes at various times standing up for your beliefs but also speaking out about truth, doing the right thing even when it doesn’t benefit your personal idiosyncratic desires, cherishing the little things in life, brothers and sisters loving and caring for one another, boy admits, “A promise is a promise,” boy exhorts his team to have faith they can win, and movie promotes making the world more beautiful when children beautify a baseball field with flowers, plus redemptive elements of repentance and forgiveness occur, the First Amendment is supported, and there’s a message about cleaning up the environment, but it’s more in line with the make America beautiful message of the 1960s rather than any false radical agenda
Foul Language:
No foul language (title character says, “Good grief” several times and girl calls dog a “ball hog”)
Violence:
Light slapstick violence such as brother and sister fight over a flower in a tug of war, baseball flies through a wooden box that a boy is standing on to pitch and it upends the pitcher and his clothes go flying off and leaves him only with his shorts on him, dog and his bird friends are filling up a little pool but the hose gets out of control and the water flies through boy’s bedroom window and wakes him up, dog dives into pool, and the water splashes boy’s face, flying baseball hits glass container holding purple Kool-Aid in it, and it splashes all over girl, dog chasing baseball trips and falls and plunges through wooden plank in fence, two players run into one another during practice, girl throws baseball into the air, and it lands on her helmet, girl swings at a baseball, and her bat goes flying into the backstop where it gets stuck inches from another girl’s face, baseball hits on top of boy’s ice cream cone, and the ice cream splatters onto his face, girl trips on her uniform which is too long and falls down, people fall down in other scenes, girl waters dandelion flower, and another girl slips on the water running off, and dog wants to steal cookies near open window, but boy shuts the window, and the window smashes onto dog’s black nose
Sex:
No sex
Nudity:
No nudity, but boy’s belly button is exposed when he loses his shirt
Alcohol Use:
Smoking and/or Drug Use and Abuse:
No smoking or drugs; and,
Miscellaneous Immorality:
Boy asks a person to wish him luck for the big game.

The movie opens with Charlie Brown dreaming about winning a big championship baseball game. Snoopy wakes him up when he loses control of the hose while trying to fill up the small pool in the backyard with his yellow bird friends.

Charlie and Linus head for the baseball field to practice for the big game tomorrow against Peppermint Patty and her team. Patty’s team has won the game the last three years, but Charlie Brown believes this is their year. His team seems to be on top of things during practice, despite some snafus at the end.

Charlie’s sister Sally appears. She reminds Charlie that he promised to let her play when she turns five. “A promise is a promise,” Charlie agrees. However, Sally soon becomes dejected when she realizes she’s too small to wield a bat and catch fly balls. So, while Charlie gives a pep talk to the team, she takes a rest on the pitcher’s mound.

Sally turns around and sees that a little yellow dandelion flower has popped up in the mound. She notices that the flower is small like her, and beautiful. It also looks lonely sitting there on the mound. Sally promises the flower that she won’t let anything bad happen to it.

Charlie Brown and the team return to the field to finish their practice. They see Sally sitting on the mound with the dandelion flower. Charlie asks her to move, but Sally refuses. She tells her brother she made a promise to protect the flower to protect it. The team tries to practice around Sally and the flower, but it doesn’t work.

The next morning, the day of the big game, Charlie Brown realizes Sally’s spent all night with the flower. He asks Lucy to speak to Sally and convince her to move. However, Sally convinces Lucy to join her crusade to protect the flower. Lucy even decides to conduct a public campaign among the neighborhood’s children to come to the field and support Sally. Tons of children show up to support Charlie Brown’s sister.

Peppermint Patty arrives with her team. To make matters worse, she tells Charlie that his team will have to forfeit the game if he can’t get the people to leave.

What is Charlie Brown going to do?

IT’S THE SMALL THINGS, CHARLIE BROWN is delightful, charming and funny. The antics and conflicts between the children are amusing. Also, Snoopy and his little bird friends are adorable and hilarious. For example, when Snoopy arrives on the field, he acts like a superstar. He gives Charlie Brown a signed baseball card of himself, while Snoopy’s bird friends take pictures of Snoopy like little paparazzi. Then, some birds carrying Snoopy’s glove fly down to hand the glove to him and then lift the sunglasses from his head and fly away.

IT’S THE SMALL THINGS has a strong moral worldview. For example, it promotes standing up for your beliefs but also speaking out about the truth. It also extols doing the right thing and making the world a more beautiful place. These messages come out in a little song Sally and the children sing to Charlie Brown. In addition, Charlie admits at one point, “A promise is a promise.” Eventually, Charlie Brown and Sally realize that brothers and sisters should be loving and caring toward one another. The conflict between them is also solved by repentance and forgiveness.

IT’S THE SMALL THINGS, CHARLIE BROWN is one of the most wholesome titles on Apple TV+ for families and children of all ages.