"Surprisingly Profound and Heartwarming, but Marred by Heavy Foul Language" 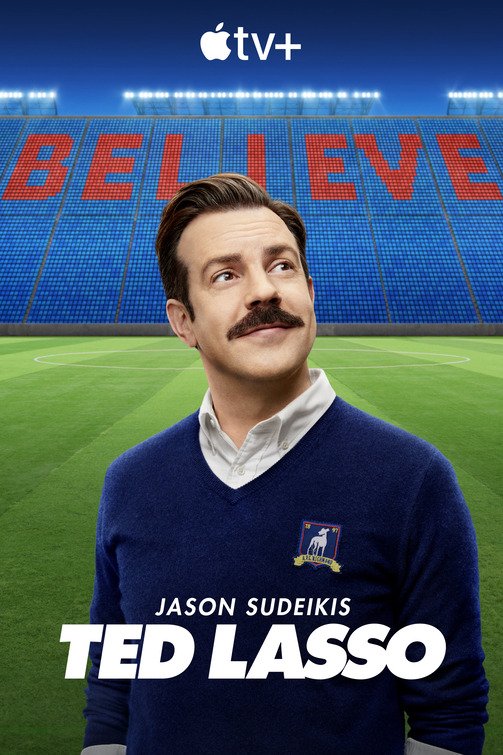 TED LASSO, the new comedy series on Apple TV Plus about an American coaching a British soccer team, shocked the entertainment world with a record 20 Emmy nominations for a first-year series. Season Two’s first two episodes are just as well-produced and heartwarming, and as deeply flawed. When the team’s Latin star hits a slump after accidentally killing the team mascot, the team hires a sports psychologist to help the player. Meanwhile, the team’s endorsement manager tries to encourage her boyfriend, who recently retired, to be a TV soccer pundit. Finally, Coach Lasso is faced with a dilemma when the team’s egotistical star player, who resigned, wants to return.

TED LASSO is extremely well written. Jason Sudeikis is brilliant as the title character, Ted Lasso. His downhome country charm, kindness and optimism encourages all the people around him, not just his players. Ted’s positive character gives the series a heartwarming and even profound quality. However, MOVIEGUIDE® advises extreme caution for TED LASSO and the first two episodes of Season Two for excessive foul language, some lewd content and occasional politically correct content.

(RoRo, BB, C, PC, H, Ab, LLL, V, S, N, A, M):
Dominant Worldview and Other Worldview Content/Elements:
Strong Romantic worldview shows people trying to be “good” people but leaving God out of their lives), mixed with strong moral content due to all the kindness shown in it (including the title character’s encouraging, kind attitude), and some characters’ attempts at redemption, offset by a nonchalant attitude toward premarital sex and foul language, plus one player makes the sign of the Cross multiple times after a traumatic accident and a politically correct humanist comment in Episode 2.1 where Nate asks Ted if they should pray before Dani makes a penalty kick and Ted replies, “Sure, but to which God and what religion”?
Foul Language:
31 obscenities (about 18 “f” words), three strong profanities, two light profanities in Episode 2.1 and 38 obscenities (more than half are “f” words), two JC profanities and one light profanity in Episode 2.2
Violence:
The opening scene in Episode 2.1 implies that the team’s mascot, a dog, is hit in the head and killed by a soccer ball while it chases and leaps to grab a bird (the camera shows the ball approaching the dogs head and then cuts away as a yelp is heard)
Sex:
Man wakes up from a nightmare with two women asleep on either side of him and a sexual comment in Episode 2.1 and implied oral sex and self-abuse in Episode 2.2, plus two or so sexual references
Nudity:
Upper male nudity in two scenes in Episode 2.1 and no nudity in Episode 2.2
Alcohol Use:
Alcohol use in both episodes
Smoking and/or Drug Use and Abuse:
No smoking or drugs, but an athlete’s agent offers him a TV program where he’s supposed to take Ecstasy every night, but the athlete isn’t interested (the scene is played for a joke about how stupid Reality TV programs can be); and,
Miscellaneous Immorality:
Characters initially refuse to forgive humbled player when he tries to make up for his wrongdoings, and characters cross their fingers a couple times.

In an era where few sitcoms are actually funny and even fewer shows refrain from pushing a liberal social agenda, the Apple TV+ comedy series TED LASSO has proven to be pretty remarkable. It just launched its second season after a debut year where it scored 20 Emmy nominations (the biggest total ever for a first-year series) and a coveted Peabody Award.

TED LASSO stars former SATURDAY NIGHT LIVE star Jason Sudeikis as the title character, an American football coach who takes a job as an English-football, or soccer, coach for a team of ragtag losers. Ted often seems clueless yet is unflappably optimistic as he takes the reins in a country and culture that’s utterly foreign to him. What he doesn’t know is that the team’s owner has purposely hired him with the hopes of destroying the team, because she won control of the team in a bitter divorce from her unfaithful ex-husband, and she secretly wants to crush his spirits.

Season One blended hilarious one-liners brilliantly with some surprisingly dramatic moments both on and off the field. Over the course of the season, Ted learned that his wife wants a divorce, leaving him stranded without his young son on the other side of the globe. The tragedy of divorce was shown with beautiful emotion. The series managed to follow the richly drawn lives of an enormous array of characters that included the team’s arrogant hotshot star, a veteran facing the sad prospect of retirement from the team, and a young actress torn between both those men. At every turn, LASSO proved to be unpredictable in how every episode turned out, while displaying an incredibly humane tone, unlike almost everything else in recent years. As a result, the series had more Emmy nominations than any first-year show in TV history, and it arguably deserved every one of them. That said, however, the first season was marred by lots of strong foul language, including man “f” words and strong profanities, and some lewd content.

The first two episodes of Season Two are just as well-produced and heartwarming, and as deeply flawed, as Season One’s were.

In the first episode, “Goodbye Earl,” the team’s new ace Latino player, Dani, accidentally kills the team’s mascot dog Earl in a wildly funny accident while making a penalty kick. His comical distress includes nonstop signs of the Cross and drenching himself in full uniform in the shower as he starts to fret that “Soccer is death!” The team hires a sports psychologist to get his head on straight, and when she wildly succeeds, numerous other players enlist her help.

Meanwhile, the actress, Keeley, who now helps the team find endorsements for its players, counsels the team’s owner about a new relationship. In season One, the team owner, Rebecca, had tried to sabotage Keeley’s relationship with the now-retired former star Roy, but Keeley forced her to realize she was being a terribly selfish and miserable person. In the third plot of this many-layered episode, Roy is now coaching his young niece’s girls’ soccer team in his hilariously brash style, while Keeley tries to get him to consider a job as a TV soccer pundit.

Like Season One, the big downside of Episode One of Season Two is its excessive foul language and implied premarital sex. The episode contains many “f” words and two strong profanities. Also, it’s implied that Keely’s romance with Roy is sexual in nature, but it’s unseen.

Episode 2 centers on the character of the team’s former hotshot player, Jamie, who was always a selfish player hogging the ball at every opportunity to give himself the most dramatic shots. He’s also been a braggart about his sexual prowess and formerly had an affair with Keely, who’s now with his nemesis and former teammate, Roy. Jamie, along with the team’s female owner, Rebecca, was always the main villain of Season One, but the owner had a powerful redemption at the end of that season.

In this episode, titled “Lavender,” Jamie is voted off a British reality show called “Lust Conquers All,” where he expected to be the winning male suitor in an even more sexualized version of the actual TV series THE BACHELORETTE. He’s vainly shocked to lose at this, and the loss comes on the heels of his being dropped by Man City, the team for which he abandoned Ted Lasso’s Richmond team.

Basically, Jamie’s lost everything. However, in keeping with the series’ remarkable empathy for all characters, and its wonderful attempts to make viewers understand what drives even the “bad guy” characters, the episode makes viewers feel for Jamie as he’s brought down, and especially as he humbles himself to beg his way back onto Ted’s team. He also seeks out Keely’s forgiveness for his ways as a bad boyfriend, without trying to steal her back from Roy.

Meanwhile, Roy is on the ascent on television, as he gets an audition as a pundit on a major British sports show. He’s warned to keep his temper in check but instead starts swearing from almost the second he starts speaking. The show’s host is terrified of getting in trouble and the censors frantically start bleeping him, but the public loves his candor, and Roy instantly has a new career.

When Ted caves and lets Jamie back on the team against his players’ wishes at the end, it leaves viewers with the delicious question of whether Jamie can come back and whether this time he can actually lead the team to greatness as well.

Episode 2 also has lots of foul language, with many “f” words and two Jesus profanities. Also, it’s implied Keely is pleasuring herself under her bedsheets while watching the video of Roy announcing his retirement, before he comes in and starts kissing her. The scene cuts away, but it’s implied in another scene later that Roy’s about to perform oral sex on her.

Other than some light soccer violence, there is no strong violence in the first two episodes of Season Two. However, the first scene of Episode One shows Nate asking Ted if they should pray before Dani makes the penalty kick. “Sure, but to which God and what religion?” Ted asks Nate. Chagrined by Ted’s reply, Nate doesn’t pray and instead just crosses his fingers. Ted’s comment here, and other occasional immoral comments he makes, are not only sad and regrettable. They are also illogical, because the program mainly depicts Ted as a decent, friendly man from Kansas, which would probably make him a Christian.

However, the negative, objectionable content in TED LASSO doesn’t detract much from the program’s overall outstanding qualities, including the writing, the directing and the acting. Every character in the show seems to be influenced positively by the title character’s optimistic, kind attitude. As played by Jason Sudeikis, Ted is always finding ways to encourage all the people around him, not only his players. Sometimes people rebuff him, but he always seems to find a way around them. Ted’s positive character gives the series a heartwarming and even profound quality. Also, Keeley is always trying to make Roy a better man. MOVIEGUIDE®, therefore, advises extreme caution for TED LASSO.