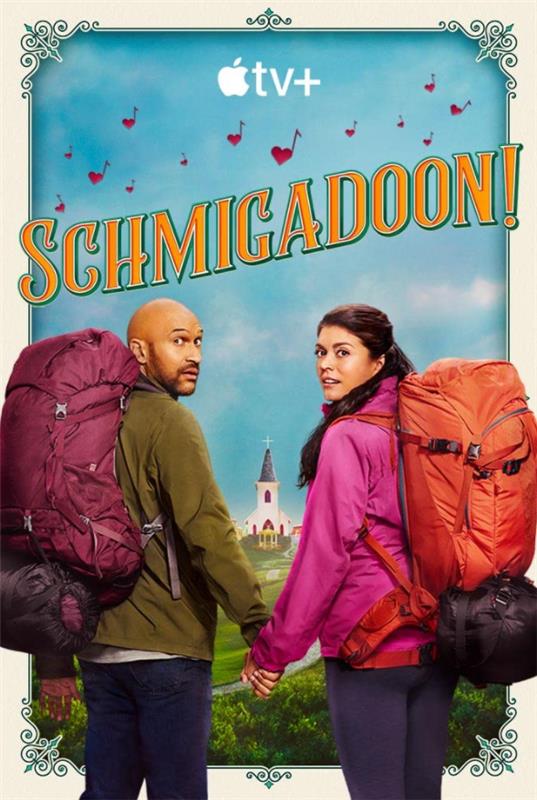 SCHMIGADOON! is a satirical homage to classic movie musicals on Apple TV Plus. MOVIEGUIDE® examined the first two episodes of the series. In the story, a modern unmarried couple facing a relationship rut take a special couples hike. They wind up lost, and walk into a magical, musical land called Schmigadoon. A leprechaun tells them they can’t leave until they find their true love. This leads to an argument between them in the second episode, where they decide to break up and search for their true love among the townsfolk of Schmigadoon.

The first two episodes of SCHMIGADOON! are a joy to watch on almost every level. The series has some talented people involved in the production. However, although the first two episodes have minimal foul language, they contain some sexual innuendo. For example, there are two mild bedroom scenes between the unmarried couple, and two songs have some light sexual innuendoes. Also, the town preacher is portrayed positively, but his wife is depicted as a shrewish, prune-faced prude. Finally, the town mayor appears to be a secret homosexual. So, MOVIEGUIDE® advises extreme caution.

(Pa, Ro, B, C, PC, AbAb, L, V, S, N, AA, M):
Dominant Worldview and Other Worldview Content/Elements:
Mixed pagan worldview with light Romantic, moral and Christian elements, but the pastor’s wife is depicted as a mean and foolish, the two leads make a couple wisecracks back at her, and it’s satirically implied the town mayor is privately homosexual
Foul Language:
Episode 1 includes one use of “pissed,” one use of the “s” word and one light profanity; and Episode 2 has one use of the “s” word
Violence:
A young woman’s father points a shotgun at a man who’s kissing her at the town’s lovers lane
Sex:
Unmarried couple falls onto bed kissing in Episode 1, and there’s implied fornication in one scene in Episode 2 with same couple under covers though the man’s bare chest is exposed, and they kiss after they talk about how many nights they might stay together before the scene fades out, and some sexual innuendoes in two songs in Episode 2 about enjoying a Tunnel of Love ride and about waiting for marriage, plus the young tempting blonde tells Josh she’s taken him to “Virginity Ruins,” where the town’s high schoolers “picnic” (she says this with a lascivious grin), and the girl also hands Josh a salami from the picnic basket she made that Josh has bought at an auction, plus it’s implied town mayor is homosexual
Nudity:
Upper male nudity in Episode 2
Alcohol Use:
Melissa drinks multiple cups of punch from the men’s punch bowl in Episode 2 after she’s informed it has alcohol in it, and she gets a bit tipsy
Smoking and/or Drug Use and Abuse:
No smoking or drugs;
Miscellaneous Immorality:
Some gossip amongst the townspeople over Josh and Melissa cohabitating.

SCHMIGADOON! is a satirical homage to classic movie musicals on Apple TV+ that follows a modern unmarried couple facing a relationship rut as they take a special couples hike and wind up lost, only to find themselves in a magical, musical land called Schmigadoon. This very direct tribute to the classic musical BRIGADOON explodes into a highly colorful, extravagant musical series in the first two episodes where the couple faces not only their own relationship struggles but also figure out how, or even if, they can escape back to the real world. MOVIEGUIDE® reviewed the first two episodes of the new series.

Melissa (Cecily Strong) and Josh (Keegan-Michael Key) are a pair of harried, lovelorn doctors who meet one night in their hospital. The show jumps to showing them having a great first anniversary together but a ho-hum third one. They are still unmarried yet living together and in a rut. So, Melissa makes them take a week-long couples retreat hike in the wilderness.

However, they wander off on their own and wind up lost, until they hear church bells coming through some fog and follow the sound into the magical land of Schmigadoon. The look of the town is so vibrant and spectacular it recalls the land of Oz in THE WIZARD OF OZ, and the townspeople immediately introduce themselves by bursting into song.

Josh is not amused, but Melissa is, and she convinces him to stay the night there. However, the town preacher’s stern wife (Kristen Chenoweth) won’t allow them to sleep in the same room since they’re cohabitating. When she’s restlessly unable to sleep, Melissa gets up and wanders, where she’s immediately approached by the town ladies’ man Danny Bailey, who’s determined to steal her from Josh.

Josh and Melissa ultimately come across a leprechaun, who warns them they won’t be able to leave Schmigadoon until they find true love. The couple have been going through the motions for a long time. So, they have a decision to make. Save their relationship and save themselves, or give up and stay in this odd new world?

Episode 2 finds more direct temptations for both Josh and Melissa. They get into a fight when Melissa starts questioning whether Josh really loves her. Angrily, they decide to break up and seek true love among the people in Schmigadoon. Josh places a bid in a town auction on the fruit basket of a comely young blonde who’s nothing but temptation trouble. Meanwhile, Danny Bailey pulls out all the stops on a musical number just for Melissa and winds up convincing her to take a magical ride with him through the town’s Tunnel of Love.

SCHMIGADOON! is a joy to watch on almost every level, from its ace cast (wonderfully led by SATURDAY NIGHT LIVE star Strong and KEY & PEELE star Key) that’s deeply loaded with top comic talents and a couple of Broadway-level musical performers in supporting roles thanks to Kristen Chenoweth and Alan Cumming. The visually inventive director Barry Sonnenfeld (MEN IN BLACK, GET SHORTY and the MOVIEGUIDE® AWARD WINNING MEN IN BLACK III) emerges from a few years of creative dormancy to prove he’s still got what it takes to make a wildly original production, backed by glorious visuals from Oscar-nominated production designer Bo Welch and great writing from creators Cinco Paul and Ken Daurio, who are best known for two Dr. Seuss feature movies and the DESPICABLE ME, MINIONS and SECRET LIFE OF PETS movies.

While this provides some entertaining viewing, several cautionary points are needed.

First, Kristen Chenoweth plays the town preacher’s wife as a mean-spirited shrew who’s constantly trying to keep the lead couple from sharing the same hotel room since they’re unmarried. That’s a fine Christian, biblical principle, but the way the character’s portrayed, it makes her a mean fool, and the couple makes a few wisecracks back at her in the first two episodes. Her husband, the town preacher, is portrayed more nicely, however.

The first two episodes have minimal foul language. So, the first is rated TV-PG, but the second episode is rated TV-14 for some sexual innuendoes in two songs. The innuendoes are light enough to escape younger viewers, perhaps, but older viewers will understand them. Also, in the first episode, after their first date together, Josh and Melissa tumble onto a bed and start kissing in one quick scene. At the beginning of Episode 2, titled “Lovers’ Spat,” they appear in bed after that first night together and discuss whether this is going to be just a one-night stand or the beginning of a longer relationship.

If it keeps up the quality level, SCHMIGADOON! may well win some awards. However, MOVIEGUIDE® advises extreme caution for the first two episodes because of their politically correct depiction of the town preacher’s wife and their sexual innuendoes.