"Animals Have Families Too" 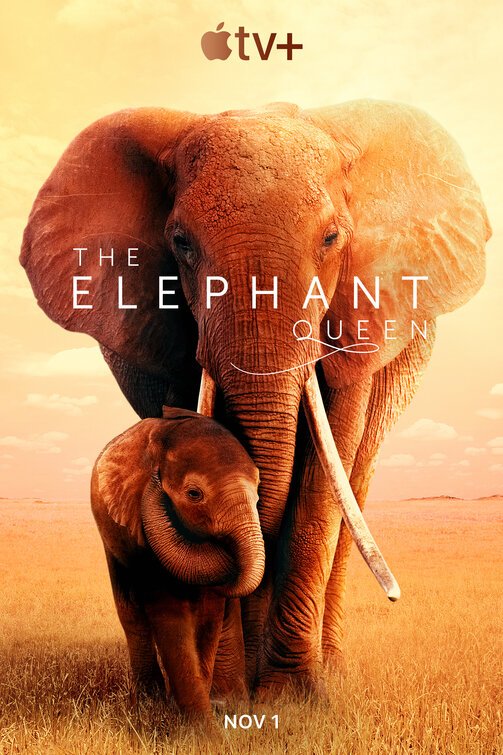 An Apple TV Plus (TV+) documentary, THE ELEPHANT QUEEN follows a family of elephants lead by a 50-year-old matriarch pachyderm named Athena. As a horrible dry season approaches, the family is forced to leave “The Kingdom,” an area near a waterhole. Through drought, starvation, loss, and new life, this family of elephants learns to rely on one another, protect and love each other, and to be kind to one another in the midst of hardship. Along the way, the viewers also learn about a few of the other animals that call “The Kingdom” their home too, as they also try to make it through the dangerous dry season.

THE ELEPHANT QUEEN has a strong moral worldview where the matriarch and her family of elephants will do anything to protect one another. The family goes through love, loss and the excitement of new life. There’s a hint of environmentalism as the breed of elephant showcased in the movie is endangered. There are also some scenes that include dead animals and frogs mating. MOVEGUIDE® advises caution for older children for THE ELEPHANT QUEEN.

(BBB, E, V, S, N):
Dominant Worldview and Other Worldview Content/Elements:
Very strong moral worldview as families protect and love each other through good and bad times, and new life is celebrated, plus some light environmentalist elements mentioning endangered species
Foul Language:
No obscenities or profanities, but elephants are shown defecating, and beetles are shown landing in the elephant feces to form a ball of feces and takes it with them to bury and slowly eat
Violence:
Some animals try to hunt one another, frogs eat other smaller frogs, dead animals are shown, a young elephant dies, and animal skulls are shown
Sex:
Frogs and fish are shown mating
Nudity:
Naturalistic animal nudity such as seen a young elephant calf gets milk from it’s mother’s nipple
Alcohol Use:
No alcohol
Smoking and/or Drug Use and Abuse:
No smoking or drugs; and,
Miscellaneous Immorality:
Nothing else objectionable.

THE ELEPHANT QUEEN, a documentary on Apple TV Plus (TV+), follows Athena, a matriarch elephant and her family as they make the long journey across the African savannah to find refuge for the dry season. THE ELEPHANT QUEEN presents a well-told, heartfelt story about a family of elephants that keeps viewers intrigued throughout, but MOVIEGUIDE® advises caution for pre-teenage children because of some scenes with dead animals and frogs mating.

The family is a group of females lead by Athena, a 50-year-old elephant and the matriarch. Athena has a daughter named Princess. Three of the other elephants that are followed are Marla and her daughter, Mimi, and a young elephant named WeWe.

Athena and her family live in a place referred to as “The Kingdom,” close to a waterhole. Along with following this family of elephants, the documentary also follows some of the animals that also call “The Kingdom” and the waterhole home, like beetles, geese, frogs, turtles, and some tiny fish.

Athena and her family soak up all the time they have at their home until the waterhole begins to dry into thick mud. At this time, Athena knows it’s time to start the long journey to a place where they can find refuge during the dry season. The family sets off to cross the deadly terrain, a long journey that requires strength that some of the elephants don’t have.

As the elephants make their way to the dry season refuge, others stay behind to find shelter underground in “The Kingdom” to wait out the dry season. Will the animals survive the dry season and make it back to “The Kingdom?” Or will some succumb to nature and the horrible drought and starvation that’s on the horizon?

THE ELEPHANT QUEEN plays almost like a Disney Nature doc, with a well-told, heartfelt story of a family who encounters the best and worst of what nature has to offer. The journey across the African savannah brings them closer together as they fight to stay alive. The story is emotional and shows how even animals need help from their family to endure the elements. The narration helps add emotion to the story, along with the incredible music and colors. Some inventive and unique camera shots are also used to help tell the story.

THE ELEPHANT QUEEN has a strong moral worldview as the matriarch, and family of elephants, will do anything to protect one another. The family goes through love, loss and the excitement of new life all at once. There’s a hint of environmentalism as the breed of elephant showcased is endangered. There are also some scenes that include dead animals and animals mating. So, MOVIEGUIDE® advises caution for pre-teenage children.

Starring: The voice of Chiwetel Ejiofor