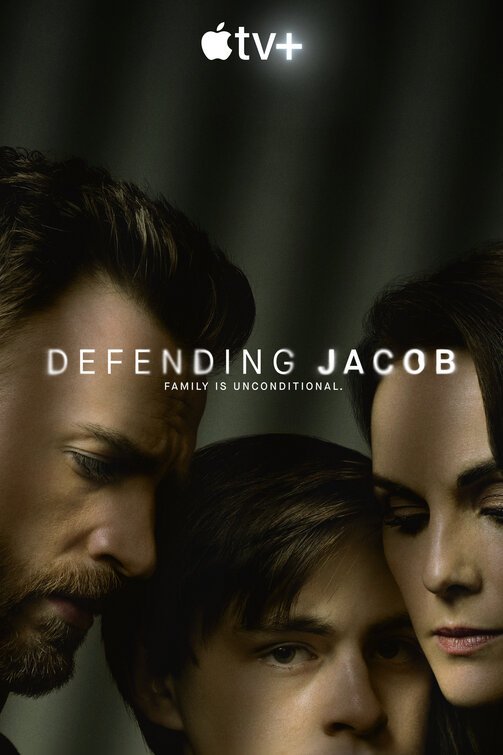 DEFENDING JACOB is a limited series on Apple+ based on the novel by William Landay. The miniseries follows the Barber family as their son Jacob is accused of murder-ing his classmate, Benjamin Rifkin. The story is told through flashbacks, but they’re easy to follow. Present day Andy Barber, Jacob’s father, sits in a courtroom testifying and tell-ing the story through his point of view. Twists, turns and secrets appear around every corner. Each new episode brings more to light and makes the audience question who killed Jacob’s classmate.

DEFENDING JACOB is incredibly well done. The cast of seasoned actors does a fantastic job evoking emotion and creating suspense. The set and music add to the script’s somber tone. The audience is left with a cliffhanger after each episode, keeping them wondering what really happened to the dead boy. DEFENDING JACOB has a strong humanist worldview where Andy takes matters into his own hands to clear his son’s name, but family, marriage and friendship are extolled. DEFENDING JACOB also contains lots of strong foul language and some violence. So, MOVIEGUIDE® advises extreme caution.

(HH, B, C, Ho, LLL, VV, S, N, A, D, MM):
Dominant Worldview and Other Worldview Content/Elements:
Strong humanist worldview where main character tries to take matters into his own hands and fix all the problems with some moral elements as family sticks together and loves each other, marriage is extolled, and characters search for the truth, some Christian and Jewish elements as Jewish prayer is recited during grieving, and young girl sings a song with Christian themes, and light homosexual elements when a lesbian lawyer makes a comment about her partner, and there’s a comment about homosexual porn
Foul Language:
80 obscenities (including some “f” words), 27 profanities (including some strong GD and JC profanities), and some name calling
Violence:
Knives shown, guns used as a threat, man choking and killing another man, dead body shown twice with a little blood, a cutter pornography site is discussed, boxing class shown but only for the purpose of working out, and no one is hurt, suicide discussion, and a car crash that was an attempted speculation to end life, murder discussed as one character is in prison for it
Sex:
Marital sex in one scene, but it’s not graphic, sex offender has photos of young boy on his phone, and married couple kisses in a few episodes
Nudity:
Upper fe-male nudity when young girl sends a nude photo, but only her back can be seen, upper male nudity during sex scene, and while at the beach, female in bikinis, and woman has shirt off during sex scene
Alcohol Use:
Alcohol use in three episodes
Smoking and/or Drug Use and Abuse:
No tobacco use but marijuana smoking in one scene; and,
Miscellaneous Immorality:
Lying, heated argument between co-workers, online bullying, graffiti on garage.

DEFENDING JACOB is a limited series on Apple+ based on the novel by William Landay. The show follows the Barber family as their son Jacob is accused of murdering his classmate Benjamin Rifkin. The story is told through flashbacks, though they are extremely easy to follow. Present day Andy Barber, Jacob’s father, sits in a courtroom testifying and telling the story through his point of view.

The miniseries starts slowly. Andy (Chris Evans) is the assistant district attorney first as-signed to the murder case of Rifkin. When the police find evidence to charge Jacob with the murder, Andy is relieved from his duty. His wife, Laurie (Michelle Dockery), is also fired from her job, and the family now has nothing to do but prepare for the trial.

Along the way, Andy does all he can to help clear his son’s name. Some could argue that Andy takes matters too much into his own hands as he tries to be of help to Jacob and his lawyer. Twists, turns and secrets are at every corner with each new episode bringing more to light and making the audience question who killed Rifkin.

DEFENDING JACOB is incredibly well done. The cast of seasoned actors does a fantastic job evoking emotion and creating suspense in each episode. The set and the music add to the script’s somber tone. The audience is left with a cliffhanger after each episode, which keeps them wondering what really happened to the dead boy.

DEFENDING JACOB has a strong humanist worldview as Andy takes matters into his own hands for most of the episodes trying to clear his sons name. However, there are moral elements such as family, marriage, friendship, and trusting law enforcement throughout. Although these aspects shine through, the show is marred by foul language and secrets.