"Destiny Is a Calling" 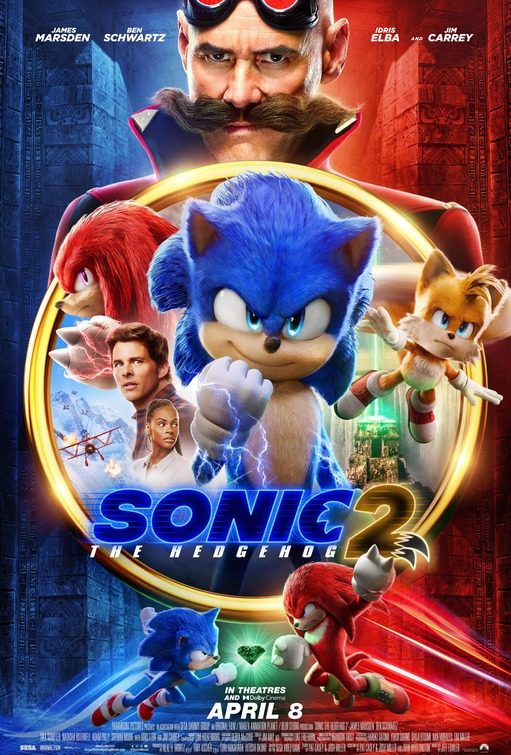 SONIC THE HEDGEHOG 2 is a terrific sequel to the hit 2020 action comedy. This time, a red alien warrior named Knuckles helps Dr. Robotnik escape the mushroom planet. Knuckles is the last of the race that destroyed the race of owl aliens who protected Sonic. Knuckles and Robotnik are after an emerald of immense power. Sonic teams up with Miles, a fox alien with two tails, to reach the emerald before Robotnik and Knuckles do.

SONIC THE HEDGEHOG 2 is a cute, funny action comedy with lots of jeopardy and humor. The script is well-written, with excellent character development, and the cast does a wonderful job. SONIC THE HEDGEHOG 2 has a strong moral, pro-family worldview. Finally, the priest at the wedding makes the Sign of the Cross in one shot, which honors the submission of mind, heart and strength that Christian believers make to their Father in Heaven, through the sacrifice of Jesus Christ on the Cross, by the power of the Holy Spirit. SONIC 2 has some light foul language and strong action, cartoon violence, so, MOVIEGUIDE® advises caution for children.

(BBB, CC, LL, VV, M):
Dominant Worldview and Other Worldview Content/Elements:
Very strong morally uplifting, pro-family worldview stresses positive parent-child type relationships, counseling younger teenage characters to do the right thing and to have patience in growing up, promotes marriage and family, with Christian, redemptive content and values promoting sacrifice and reconciliation between enemies and including a wedding scene with a priest who makes a visual reference to faith, the Triune God and biblical principles
Foul Language:
One “h” obscenity, nine light profanities (such as OMG, MG and an “Oh, Lord”), two or so “butt” vulgarities, and some jokes about passing gas
Violence:
Strong cartoon and action violence such as lots of fighting and punching, explosions, chase scenes, hero knocked out two or three times, people fall, character punches title hero and knocks him into widescreen television (the glass breaks and the television falls onto the floor), villain fires missiles at good guys flying in old-fashioned plane, and pilot has to dodge the missiles, big chase scene through streets of Seattle as thieves drive away in armored truck they stole, hero recklessly drives armored truck after he takes it cover from thieves, chase scene damages vehicles that are driving in the street or are parked along street, drones fire missiles at good guys, robot attacks soldiers and good guys, federal agents pull guns, robot steps on a character, guards are knocked unconscious, a chase scene down a snowy mountaintop occurs, and parts of an avalanche burst thru a transport portal and onto a small podium where an outdoor wedding ceremony in Hawaii was taking place, etc.
Sex:
No sex
Nudity:
No nudity (some light female cleavage)
Alcohol Use:
No alcohol use
Smoking and/or Drug Use and Abuse:
No smoking or drugs; and,
Miscellaneous Immorality:
Villain betrays his partner and seeks total domination, plus a verbal joke makes an oblique reference to something President Donald Trump once said while in office.

SONIC THE HEDGEHOG 2 is a sequel to the hit 2020 action comedy, where Sonic and his adopted human parents must overcome a returned Dr. Robotnik, who’s teamed up with an alien warrior looking for an emerald imbued with great power. SONIC THE HEDGEHOG 2 is a cute, funny movie with lots of lively, exciting jeopardy, heartfelt family moments, plenty of humor, and a fun wedding scene, but it does have some light foul language and strong cartoon violence with punching, hitting and explosions, both of which warrant caution for children.

A combination of live action and animation, the sequel opens on the mushroom planet where Sonic’s friend, Tom, had banished Dr. Robotnik in the first movie. In the funny opening sequence, the evil doctor has managed to attract three alien visitors, in the hopes that he can use their portal to return to Earth. He cleverly disposes of the visitors when a fourth visitor enters through the portal. The visitor is a red alien named Knuckles, who’s the last of his race of spiny, intelligent anteater creatures. Knuckles notices the energy quill that Dr. Robotnik stole from Sonic, who got it from his owl mentor, Longclaw, who died in the first movie. Knuckles questions Robotnik about it and mentions he’s looking for the “Master Emerald,” a device that’s been imbued with immense power. Hearing about having immense power piques Robotnik’s interest. So, he agrees to help Knuckles find Sonic to try to locate the emerald. Meanwhile, a clever young fox with two tails named Miles arrives on Earth to warn Sonic about Knuckles.

Cut to Sonic in Seattle, following an armored truck heist in Seattle, unknown to his adopted parents, Tom and Maddie, in Green Hills where they all live. Sonic desperately wants to be a hero, and he tries to stop the thieves from getting away. However, he causes lots of mayhem and endangers people’s lives.

Early the next morning, Sonic sneaks home, but Tom already knows all about Sonic’s late night adventure. In fact, it was fairly easy for Tom to figure out the Ferris Buehler ruse that Sonic had invented to fool him. Making the connection between the news from Seattle about the attempted armored car heist and Sonic’s involvement was just as easy.

Tom sets Sonic down and reminds him he’s only just a kid (Sonic is a teenager) who still has a lot to learn. He advises Sonic to have patience and wait for the proper moment when his powers will really be needed.

Sonic uses one of his rings to transport Tom and Maddie to Hawaii to attend the wedding of Maddie’s sister, Rachel. He gives Tom a ring so that he and Maddie can return home after the wedding. Their absence gives Sonic a chance to party. Tom calls to see how Sonic’s doing, and Sonic has to use his speed to clean up the place.

After Tom hangs up, however, Dr. Robotnik and Knuckles appear, and Knuckles starts attacking Sonic. They think Sonic knows where the Master Emerald is located, but he doesn’t. Sonic takes a beating from Knuckles until Miles, the young fox with two tails, shows up to rescue him. Miles, whose nickname is “Tails,” can use his two tails like a helicopter and he flies Sonic away from Knuckles and Robotnik.

Sonic and Tails locate an old map from Longclaw that Sonic’s mentor gave to him, though Sonic didn’t know he had it. They look at the map, which reveals that a compass leading to the Master Emerald is in Siberia. Sonic and Tails set off for Siberia, but they are being tracked by Dr. Robotnik and Knuckles.

Can Sonic and Tails find the compass and the Master Emerald before they fall into Dr. Robotnik’s evil clutches?

SONIC THE HEDGEHOG 2 is a cute, funny action comedy with science fiction qualities. The movie says the Master Emerald was a device created by Longclaw’s race of owls to control several others gems of power. As such, the movie hints that the device is a technological artifact, not a magical one, even though it seems to work like the rings of power and the one ring to rule the other rings in novelist J.R.R. Tolkien’s masterpiece THE LORD OF THE RINGS. Whatever the case, however, the movie has lots of lively, exciting jeopardy, some heartfelt family moments, plenty of action, and lots of humor, including a funny wedding scene. As with the first movie, the cast here does a wonderful job of bringing the well-written story and characters to life. Once again, for example, Jim Carrey as the villain is a hoot. The other players deliver the goods as well.

SONIC THE HEDGEHOG 2 has a strong moral, pro-family worldview. For example, Tom takes a fatherly approach to helping Sonic, and this leads to several heartwarming moments. Also, at one point, Sonic performs an act of compassion that expresses the movie’s support for the value of life, which is opposed to Dr. Robotnik’s anti-human desire to dominate the world through machines. Finally, the priest at the wedding makes the Sign of the Cross in one shot, a Christian symbol with lots of theological meaning that honors the submission of mind, heart and strength that Christian believers make to their Father in Heaven, through the sacrifice of Jesus Christ on the Cross, by the power of the Holy Spirit.

SONIC 2 does have, however, lots of action and cartoon violence. There is also some light foul language, including nine light profanities, plus some rude humor, such as some jokes about passing gas. So, MOVIEGUIDE® advises caution for children.