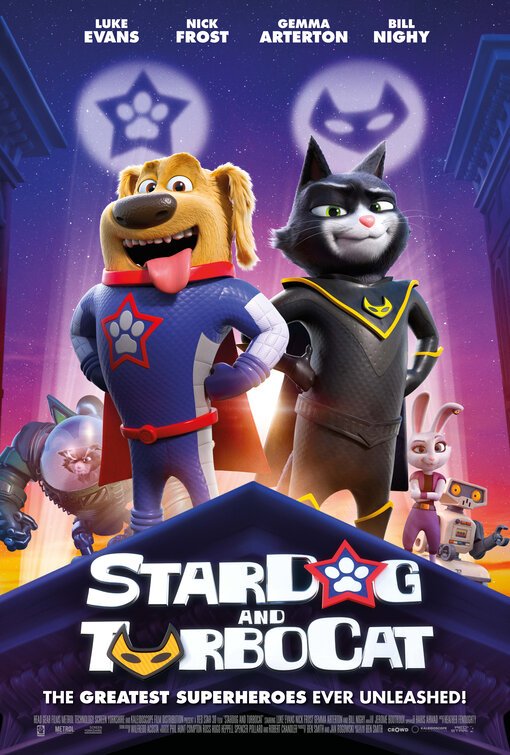 STARDOG AND TURBOCAT is a funny, witty animated superhero animal movie. In 1969, a scientist named David sends his dog, Buddy, into outer space for an important mission. Some kind of strange energy knocks out Buddy, who doesn’t return to Earth until 50 years later. Buddy remembers David told him that he’s tracking the capsule and will come get him. However, Buddy got separated from the capsule. He gets help from a vigilante cat named Felix and other animals to locate the capsule. One of the animals, however, is a villain.

Once the plot gets going, STARDOG AND TURBOCAT turns into an exciting adventure with funny twists and turns. For example, during the action, Felix and a villainous cat must stop everything to take a nap in sunbeams. STARDOG AND TURBOCAT has a strong moral worldview with redemptive elements. It extols love, working together to fight evil and protect the weak, repentance, forgiveness, and sacrifice. The cartoon violence in STARDOG AND TURBOCAT is not frenetic, but it still may be too much for younger children that feature the “d” word.

(BBB, C, O, L, VV, M):
Dominant Worldview and Other Worldview Content/Elements:
Very strong moral worldview with some redemptive elements extols general love (love between pets and humans and love between father and daughter), working together to fight evil and protect the weak and vulnerable, doing the right thing, repentance, forgiveness, reconciliation, and sacrifice, plus a couple references to magic in the world because a rabbit character once worked in a magic show
Foul Language:
Three “d” words, no profanities, and a cat character insults “butt-sniffing” dogs in two places
Violence:
Lots of action cartoon and funny slapstick violence such as vigilante cat and a goldfish in a makeshift tank (a “fish tank”) shoot little rubber missiles at a dog who turns evil, police car chases running dog and cat, a taser weapon is used to incapacitate a dog and then incapacitate the dog and a cat together, dog accidentally runs into a steel pole, a flat tire explosion wrecks a police pickup truck, cat and dog rescue an unconscious girl in a truck sitting precariously near a cliff, a dog with super strength stops the truck from falling on his cat friend, a goldfish shoots himself into a dog’s mouth and starts beating him up on the inside, giant robot crashes through walls, giant robot almost steps on the hero dog and cat, an explosion occurs
Sex:
No sex, but a male cat character is enamored by a female bunny rabbit
Nudity:
No nudity
Alcohol Use:
No alcohol use
Smoking and/or Drug Use and Abuse:
No human smoking or drugs, but cat nip becomes a funny plot device because both the hero and the villain are cats; and,
Miscellaneous Immorality:
Girl falsely tells her policeman father a cat and dog have escaped to protect the cat and dog from him, and villains hate but their hatred is rebuked.

STARDOG AND TURBOCAT is a funny, witty animated superhero movie about a dog who’s shot into outer space in 1969 using a radioactive crystal and returns to Earth 50 years later with super powers, where he must help a vigilante cat stop a plot to use the crystal power to turn all humans into stupid animal slaves. Once the plot gets going, STARDOG AND TURBOCAT turns into an exciting adventure with many funny twists and turns, but younger children may not understand everything that’s happening in the movie’s second half.

The movie opens in 1969 with a scientist named David launching his pet dog, Buddy, into outer space. Buddy returns 50 years later, landing in Glenfield, a town run by a new police chief who thinks all stray dogs and cats are filthy creatures, so the police chief rounds them up and puts them into the pound. All the humans in the town shun Buddy and run away.

Buddy runs into Felix, a vigilante cat who calls himself TurboCat and has all sorts of devices, including a car, that he uses to protect stray animals from Chief Peck. Felix takes Buddy back to his secret lair inside an abandoned museum. He introduces Buddy to his robot assistance, Sinclair.

Buddy was knocked unconscious during the landing and has lost his space capsule. He figures that, if he can find the capsule, he can locate his beloved owner, David. Felix at first refuses to help Buddy, but a clue about the capsule arouses his interest. However, outside the lair, they are chased by Chief Peck, and they discover that Buddy is able to run super-fast.

Eventually, they get help from a small team of animals that also protect stray animals from the humans. The team is led by a female rabbit named Cassidy and includes a shy mouse named Tinker, an aggressive goldfish named Bullion, and an older cat scientist named Todd. Felix is enamored with Cassidy.

Soon, the animals find Buddy’s capsule, which has been powered by a special radioactive crystal called hyperlithium. Todd wants to use the crystal to power a giant robot to protect animals from humans. However, the capsule has been found by Chief Peck, who has taken the capsule to the pound.

Felix and Buddy sneak into the pound to get the capsule, but they are captured by Peck and driven away with the capsule and a Doberman named Victor to police headquarters. Peck’s young daughter, Alex, is riding with them because Peck couldn’t find a babysitter. Cassidy arrives to rescue them, but she crashes the police truck. The truck sits precariously on a cliff next to the highway, with Alex inside. Felix and Buddy try to rescue her. During the rescue, they discover that Buddy also has super strength.

After rescuing Alex, Buddy carries the capsule back to Felix’s secret lair. He leaves the unconscious Alex and Buck outside the lair on a park bench. Alex wakes up and befriends Felix and Buddy when they appear out of the manhole cover that leads to the lair’s underground tunnel. They disappear, however, when Peck wakes up.

The tables are turned when Felix and Buddy discover that Todd was part of the space program in 1969 and was given long life by being close to a piece of hyperlithium. Todd is angry about being passed over by David in favor of Buddy for the space shot. He plans to release a hyperlithium bomb that will turn all the humans in Glenfield into stupid animal servants of cats and dogs, led by Todd.

So, the question becomes, can Buddy and Felix, StarDog and TurboCat, save the day? Especially since Todd now controls a giant robot powered by hyperlithium?

Once the plot gets going, STARDOG AND TURBOCAT turns into an exciting adventure with many funny twists and turns. For example, when Felix is charged at one point to guard the capsule in the lair, he takes a catnap outside when a sunbeam hits the pavement. The same thing happens to Todd for a moment when he’s controlling the giant robot’s movements and a skylight opens up to let in a sunbeam. Cats can’t resist taking a nap in a sunbeam. Some funny dialogue adds even more humor to these twists.

STARDOG AND TURBOCAT has a strong moral worldview with redemptive elements. It extols love, working together to fight evil and protect the weak and vulnerable, repentance, forgiveness, reconciliation, and sacrifice. Eventually, TurboCat learns that humans aren’t bad overall; they’ve just been taught to fear animals. Chief Peck also fears animals because, when she was young, an animal scratched his daughter’s right hand and left a small scar. Thus, his fear and anger toward animals is because of his love for his daughter, Alex. Eventually, the exciting plot leads to a touching finish where everyone learns to live together in harmony, while StarDog, TurboCat and Cassidy’s team fight animal abuse, bullies and supervillains trying to take over the world. First, however, TurboCat must take a nap.

The cartoon violence in STARDOG AND TURBOCAT is not frenetic or mean, but it still may be too much for younger children. There are also three “d” obscenities.