"Female Sexual Predator Gets Her Comeuppance" 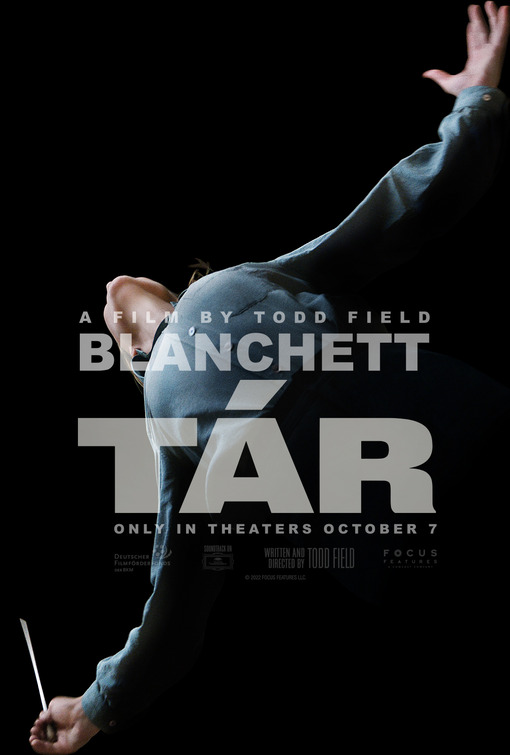 TÁR is a drama about the downfall of a lesbian musical celebrity and brilliant female conductor of a highly esteemed orchestra who loses everything when her predatory behavior is exposed. Lydia Tár is about to release her highly anticipated autobiography. She’s on top of the world as the entire elite musical community awaits her performance of Mahler’s Fifth Symphony in her own interpretation. However, things begin to spiral downward when one of Lydia’s recent female sexual victims cries out for help, and Lydia responds with cold and dismissive indifference.

The title character in TÁR is a decorated and glamorized female version of Harvey Weinstein. Cate Blanchett gives an excellent, passion-filled performance as the title character. The best moments are when she conducts the orchestra. TÁR is something of a cautionary tale about the abuse of power. It also takes a stand against the cancel culture. However, the movie portrays the abuse of power in trading privileges for sexual favors with young women. It also contains a polymerous lesbian relationship between the leading characters and some strong language, including a few “f” words.

TÁR is a sophisticated telling of a brilliant female conductor’s abuse of power at the height of her career whose life devolves into a downward spiral after one of her female victims commits suicide. TÁR is something of a cautionary tale about the abuse of power, but it involves strong homosexual content, sexual predatory behavior, abuse, and some strong foul language.

The movie has an incredibly slow open, which begins with credits on a black screen. Then it continues with a lengthy interview on an American talk show, which establishes the numerous accomplishments of Lydia Tár. Tár prattles on about the influence of various conductors and concertos, never missing a moment to complicate the subject with convoluted dialogue. Once the maestra’s superior genius is established, she moves onto teaching a class at The Juilliard School. There, she challenges the short-sightedness of cancel culture. Tár tags the “woke” student as a product of the “social media architect” and instructs him not to be “so eager to be offended.”

The camera follows Tár and her assistant conductor and lesbian mistress, Francesca Lentini, back to their home in Germany. Francesca vies for her boss’s attention, but Tár seems bored and returns to the woman she calls her wife, Sharon. The tormented Sharon knows about Tár’s sexual escapades but is continually charmed into complacency. Tár and Sharon share an adopted daughter, Petra. Tár shows genuine care for the young child and protects her from the school bully while claiming she is Petra’s father.

The loyal assistant, Francesca, receives desperate emails from one of Tár’s recent young female victims. Francesca pleads with Tár to help the troubled ex-lover, but her pleas are met with stoic indifference.

The young woman commits suicide, and her family connects the dots back to Tár. A series of emails reveals that Tár “blackballed” the promising young musician from the entire musical community. Francesca is heartbroken and seeks consolation from her beloved mentor, Tár. She’s met with denial and threats. Francesca decides to make Tár’s level of cruelty and disgusting behavior known to the authorities. Tár is brought up on charges. She travels to New York for a deposition, but brings her latest targeted victim, another very young bright musician. Tár is oblivious to her offenses. She ultimately loses her family and her career. The one thing she isn’t willing to lose is the music.

TÁR is a very slow movie that goes nowhere but down. The director deserves credit for making a weak story and a despicable character tolerable, and at times interesting, for over two and a half hours. One wonders if the protagonist were male, would he have been given the same intrigue? The title character is a decorated and glamorized female version of Harvey Weinstein. Cate Blanchett gives an excellent, passion-filled performance as the title character. Blanchett herself has been rumored to be involved with a few Hollywood dens of iniquity an, at one point, suggested she was bisexual, but a week later she denied that she was in an English tabloid the Guardian where she emphasized that she was married with four children.

The best moments are when she conducts the orchestra. The musical elements are second to none.

TÁR is something of a morality tale about the abuse of power. It also takes a stand against cancel culture. However, the movie portrays the abuse of power in trading privileges for sexual favors with young women. It also contains a polymerous lesbian relationship between the leading characters and some strong language, including a few “f” words.

Danny Trejo on Ancestry and the Almighty: ‘I’m Just Overwhelmed’