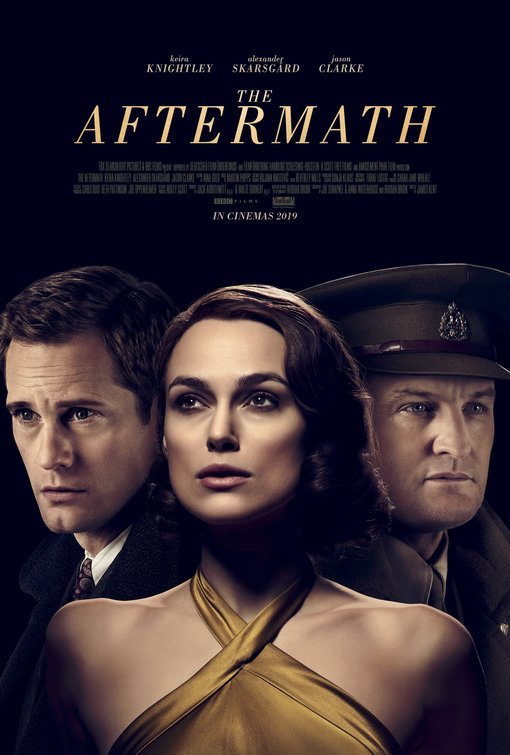 THE AFTERMATH depicts a romantic triangle between a British colonel, his wife and a widowed German architect after the Allied victory over Germany in 1945. The married British colonel, who leads the occupation forces in Hamburg, commandeers the spacious house of the architect, whose wife died when the Allies bombed the city. The colonel’s wife is still haunted by their young son’s death during Germany’s bombing of Britain. She isn’t ready to forgive the Germans, including the architect. However, their mutual grief brings them together. Meanwhile, the colonel is unable to discuss his son’s death with his wife and is focused on his job. His emotional unavailability drives her into the arms of the architect.

(C, B, AC, P, L, VV, SS, NN, A, D, M):
Dominant Worldview and Other Worldview Content/Elements:
Light redemptive, moral worldview that ultimately affirms marriage and extols the benefits that children bring and the potential loss that can happen when children are threatened, as well as forgiveness and compassion, plus National Socialists are the bad guys, and British soldiers are good guys
Foul Language:
Two obscenities (one “f” word), two strong profanities, three light profanities, an obscene gesture is flashed
Violence:
Apparent terrorist trying to run away is shot dead through the neck, a character drowns, protestors fight, another character is shot dead, and the wound on his forehead is shown, military interrogator threatens to kill cocky terrorist he’s interviewing for information, and photos of Holocaust victims are shown
Sex:
Two scenes of depicted adultery sex (one with nudity), married woman spends a night with unmarried man in a cabin, and they plan to run away together, husband mentions wanting to take off his wife’s clothes later when they’re alone, but those plans are interrupted, adulterous kissing, teenagers kiss
Nudity:
Upper female nudity in one sex scene, some upper male nudity
Alcohol Use:
Alcohol use
Smoking and/or Drug Use and Abuse:
Smoking, but no drugs; and,
Miscellaneous Immorality:
Cheating, resentment, German post-war terrorists express admiration for Hitler, man neglects his wife for his duty, and man shuts down his wife’s efforts to discuss the tragic death of their son three years ago during a bombing in World War II.

THE AFTERMATH depicts a romantic triangle between a British officer, his wife and a widowed German architect in Hamburg in the wake of the Allied victory over Germany in 1945. Brilliantly scripted and directed, THE AFTERMATH has one of the great, most powerful and most satisfying romantic endings, but it contains a couple explicit adultery scenes, nudity, some strong foul language, and violence involving German terrorists still loyal to their dead fuhrer, Adolf Hitler. MOVIEGUIDE® advises extreme caution for THE AFTERMATH.

The movie stars Keira Knightly as Rachel Morgan. It opens with Rachel arriving on a train in Hamburg, where her husband, Col. Lewis Morgan, is in charge of the British sector there in 1945, five months after the Allied victory over Hitler in April 1945. The British have commandeered a German architect’s house for the Colonel and his beautiful wife. Colonel Morgan is sympathetic to the architect, Stephen Lubert, because Stephen lost his wife to the Allied bombing campaign on Hamburg in 1943. So he asks Stephen, who’s raising his teenage daughter, Freda, alone, to stay in the top floor of the house, a furnished attic. Rachel, however, is upset about this decision because she and Lewis lost their son in 1942 during the German bombing campaign of Britain. She’s still haunted by their son’s sudden death and isn’t ready to forgive the Germans, even though Stephen refused to become a member of the Nazi Party.

Meanwhile, Rachel is having problems with her marriage with Lewis. In the first place, Lewis doesn’t even want to bring up the subject of the death of their son, while Rachel still carefully holds on to their son’s favorite sweater, lovingly placing it into the chest of drawers in their bedroom. Also, Lewis is too committed to his military job. Just when he and Rachel are starting to renew their relationship, his job repeatedly calls him away to handle some problem. So, Rachel clearly keeps asking herself, “Does my husband still love me? Does he care more about the Germans than he does about me?”

It isn’t long before Rachel and Stephen begin an affair. Ironically, the affair helps Rachel to stop brooding about the loss of her son and about her marital problems. For the first time in several years, she’s happy.

Will Rachel run away with Stephen and his daughter? Or, will Lewis find out about the affair?

THE AFTERMATH has a brilliant script and is superbly directed by James Kent. Kent crafts a truly memorable, powerful ending that’s very satisfying and very moving.

THE AFTERMATH has a redemptive, moral worldview that ultimately affirms marriage. It also extols the benefits that children bring, the potential loss that can happen when children are threatened, as well as forgiveness and compassion. Eventually, it’s the children who help solve the plot problem, including the colonel’s memory of his son. There are also touching scenes between the wife and her son and the architect and his daughter. However, these positive things and the wonderful ending are marred by a couple explicit adultery scenes, nudity, brief foul language, and violence involving German terrorists still loyal to their dead fuhrer, Adolf Hitler. So, MOVIEGUIDE® advises extreme caution for THE AFTERMATH.