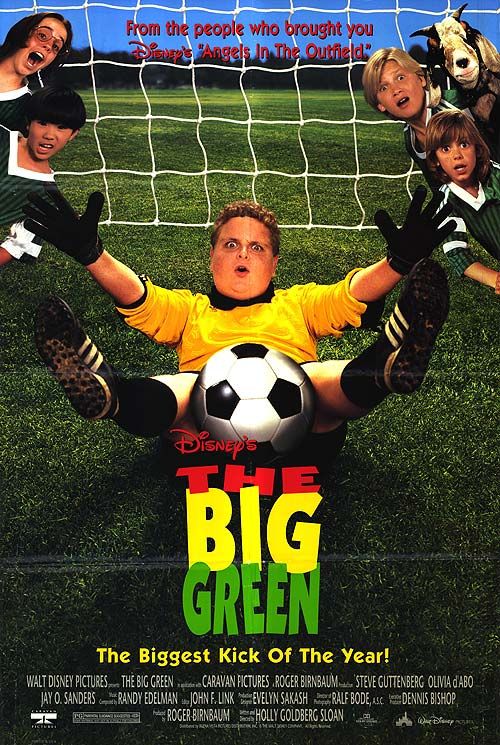 THE BIG GREEN is a recycled mixture of THE MIGHTY DUCKS and BAD NEWS BEARS. A schoolroom of depressed pre-teenagers are brought onto a soccer field by their pretty English teacher, and through hard work, they win their way to the state championship. Though slow moving and suffering from a tired plot, it does emphasize positive values with very, very little objectionable material.

(B, L, A, O, M) Moral worldview extolling teamwork and perseverance; one obscenity and some scatological incidents; one drinking scene; and, one scene involving tarot cards & Ouji board

THE BIG GREEN mixes the plots and characters from THE BAD NEWS BEARS and THE MIGHTY DUCKS and then tosses in a soccer ball. The result is a slightly-bland, but winsome release from Disney. We begin with a schoolroom of scruffy young teenagers in the dismal town of Elma, Texas. The teenagers have a new teacher from England. She finds the children as depressed as their hometown. She attempts to build their self-esteem with words of encouragement and sports. With the help of the deputy sheriff, she enters the class in a nearby soccer league. Not a bad idea, except the teenagers don’t know the first thing about soccer. But, they play until they reach the state championships.

Although the film contains very little objectionable material, it has one drinking scene with an abusive dad and one scene where the goalie is consulting tarot cards. THE BIG GREEN never gets past its tired formula and one-dimensional characters, and so we never really get to know these kids. Thus, it is hard to cheer them on to victory. However, the underdog theme of the film, “whoever is least shall be greatest,” is of some note. So, if you are interested in a fairly innocuous movie about victory, teamwork and overcoming obstacles, you will score attending.

Rent or Buy THE BIG GREEN: