"Remember Who You Are" 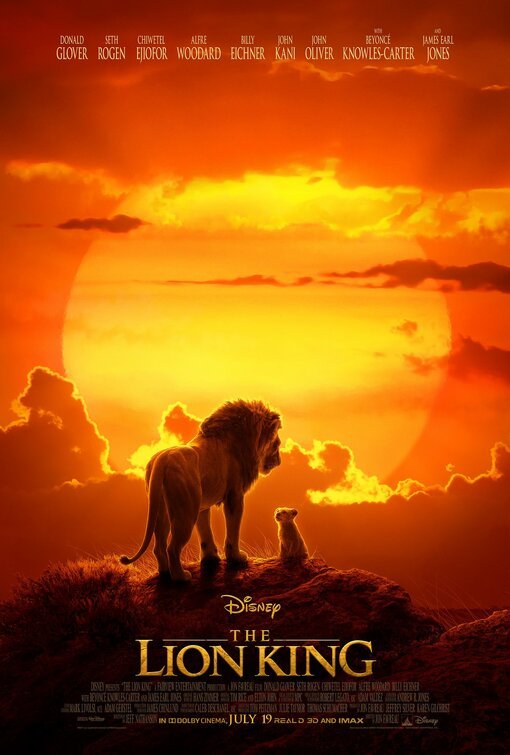 THE LION KING returns to the big screen in a live-action remake of the popular 1994 cartoon, as Simba the lion has to learn to grow up and save the ones he loves.

THE LION KING is a technologically innovative live-action remake of Disney’s classic 1994 animated movie. Simba, a lion in line for the throne of Pride Rock, has to learn to grow up and save the ones he loves. After his father Mufasa dies in a stampede, Simba flees his homeland and embraces a simpler life devoid of responsibility. Back at Pride Rock, Simba’s evil Uncle Scar reigns as the new king, but conditions in the kingdom are bleak. Simba’s childhood friend sets out for help and finds Simba, whom she thought was dead. Now, Simba must decide whether to challenge his uncle or keep living a selfish life free from worry.

THE LION KING is very well produced, with amazing graphics and stunning images of African scenery. It’s very much like the original animated movie, pretty much scene for scene. It also has the same great music. THE LION KING has a strong moral, redemptive worldview extolling sacrifice and honor. However, there is some pagan mysticism and scary scenes of animals fighting each other. So, the new LION KING merits caution for younger children.

(BB, C, Ro, Pa, FR, L, VV, M):
Dominant Worldview and Other Worldview Content/Elements:
Strong moral worldview with emphasis on doing the honorable thing and sacrificing for others and a strong father/son relationship that extol some Christian thinking of the love the Father has for his Son and His people and the honorable way to run a kingdom, plus one scene that has a Romantic tone when characters sing “Can you Feel the Love Tonight,” and a few scenes highlight pagan mysticism;
Foul Language:
One light profanity, characters pass gas, giraffe feces shown;
Violence:
Some moderate and light violence includes scenes of animals fighting, a lion’s brother pushes him into a stampede of oncoming buffalo and he dies, and blood is depicted as a lion eats an antelope;
Sex:
No;
Nudity:
None;
Alcohol Use:
No alcohol;
Smoking and/or Drug Use and Abuse:
No smoking or drugs; and,
Miscellaneous Immorality:
Trickery, murder, and selfishness, but rebuked.

THE LION KING returns to the big screen in a live-action remake of the popular 1994 cartoon, as Simba the lion has to learn to grow up and save the ones he loves. THE LION KING is well made and has a strong moral, redemptive worldview extolling sacrifice and acting honorably, but it does have some pagan mysticism and scary scenes of lions fighting each other.

Simba is the King’s son who wants to grow up fast. When he takes the advice of his deceitful uncle, Scar, to go to the elephant carcasses with his best friend Nala, he gets into a lot of trouble. Suddenly, a huge pack of hyenas are around him, and his father, Mufasa, has to save him. Mufasa tells him that even though Simba will one day be a king, he must learn that being a king means ruling to help others, not solely for the benefit of one’s self. He also tells him that the kings of the past are in the sky and look down on us in the form of stars.

Even though Scar misled Simba before, Simba decides to follow Scar’s advice again, going to the center of the inside of a canyon to try to find his roar. Simba starts to try to roar and roar and suddenly a stamped of cows comes down, with hyenas nipping at their feet. Simba tries to run away, and Scar goes to Mufasa to tell him. Soon, Mufasa comes to save Simba, but once he has saved Simba and is trying to climb the canyon, Scar pushes him down into the stampede of cows. Scar has devised this plan to kill Mufasa so he can become King and have the hyenas as his army. The plan works, and Mufasa is killed. However, Scar convinces Simba that it’s Simba’s fault his father dies, and Simba should run away and never return.

Simba runs away from his mother and his home, thinking he caused his father’s death. Scar now is the king of the land, after deceiving the other lions to think Mufasa and Simba died. Years pass, and the land is being over hunted and not reproducing nutrients. Simba is still living by himself, though with his two friends, Pumbaa and Timon, who are emphasizing a life of only caring about yourself and living a worry free. Will Simba grow up and help save his home and be the King he’s supposed to be, or will he continue live an easy, selfish life?

THE LION KING has a strong moral, redemptive worldview about sacrificing your life for others. The movie’s overarching premise is that Simba has a purpose to do things for the benefit of others. Simba must realize he’s his father’s son, the son of a King, who makes sacrifices for others, including his subjects. Despite this positive content, THE LION KING does have some pagan mysticism. Just like the original animated version, there is a shaman character who shows Simba his father up in the clouds speaking to him.

THE LION KING is very well produced, with amazing graphics and stunning images of African scenery. It is very much like the original animated movie, pretty much scene for scene. It also has the same great music, which will have many viewers singing along. The casting choices on this LION KING are interesting, fun, and enjoyable. THE LION KING has a strong moral, redemptive worldview extolling sacrifice and honor. However, the movie contains some very scary scenes of animals fighting that may trouble younger children, The images are so realistic that younger children may not be able to decipher that this is not reality. Consequently, the new LION KING merits caution for younger children.