"The Real Treasure Is Love" 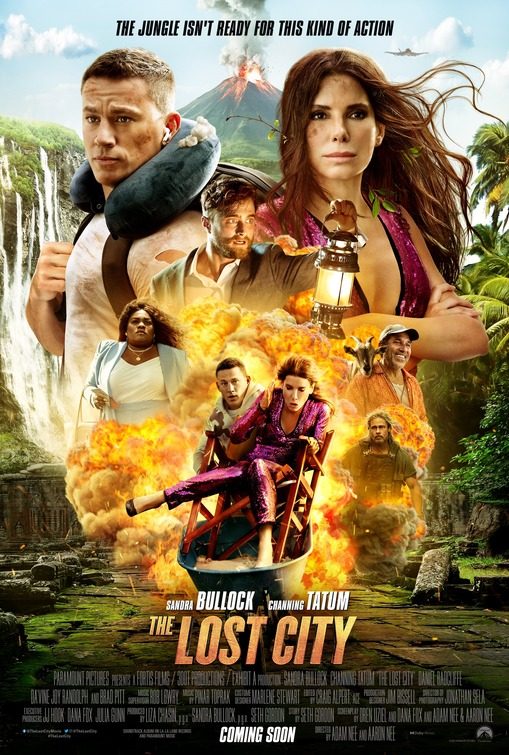 THE LOST CITY stars Sandra Bullock as Loretta Sage, a romance novelist who goes on a book tour to promote her latest book. While on the first leg of her tour, a wealthy man named Abigail Fairfax has Loretta kidnapped. Fairfax wants to find a precious headdress on a lost island and needs her help to translate a clue. Alan, Loretta’s cover model, comes to her aid with the help of an ex-Navy Seal turned meditation devotee. However, there are multiple bumps along the way, and Alan and Loretta find themselves going forward alone against the bad guys.

THE LOST CITY is an exceptional action comedy with fun plot twists. Sandra Bullock and Channing Tatum have good comic timing. The ending has a powerful message about love being greater than material possessions. The movie stresses the need not to judge a book by its cover and dealing with grief in a positive manner. However, the movie’s positive elements are marred by New Age references and politically correct dialogue. THE LOST CITY also contains many off-color innuendoes, several obscenities and some strong profanities.

(BB, C, Pa, FR, PC, Fe, E, P, LLL, VV, SS, N, A, D, M):
Dominant Worldview and Other Worldview Content/Elements:
Strong moral worldview with some redemptive content includes a powerful message about love being greater than material possessions, truth exposes the villain, a character says someone is an angel, and the person says, “How did you know,” and movie stresses the need not to judge a book by its cover, dealing with grief in a positive manner, rescuing someone about whom you care, and stresses the need for forgiveness and saying you’re sorry, mitigated by objectionable elements such as immoral pagan behavior, New Age elements such as heroine meets man at a meditation conference titled “Touching Your Inner Self” and a reference about doing New Age healing, and some politically correct dialogue such as a male character named Abigail stresses that his name is gender neutral, lead male character is sad he has to use a plastic bottle instead of a glass one, but that it will be reused, man and woman argue about how to evade villains with strategy, and man says he’s a feminist and mentions Gloria Steinem, plus major supporting character is a retired Navy Seal
Foul Language:
Seven obscenities (two “s” words and four a** words plus an obscene word for male genitalia), three Jesus profanities, and 18 light profanities (mostly OMGs, but also one “Holy Mother of God), the title of a romance novel is an innuendo for male genitalia, there’s a comment about a woman urinating in a river, characters describe a tunnel as an anus, and there’s a mention of bat guano
Violence:
Strong and light violence includes a woman kicks a trash can out of anger, woman mentions that in college her friend was found dead in a car but doesn’t say how she died, henchmen chloroform a character they kidnap, multiple explosions, a volcano erupts, villains shoot at the lead characters trying to escape their grasp, characters choked until they become unconscious, leeches depicted on a character, a few characters fall to their deaths, man’s crotch lit on fire, man killed and blood splatter depicted for comical effect, character jokes that he can taste his brains and thoughts, and multiple instances of hand to hand combat with headbutts and glass bottles used as weapons
Sex:
Lots of mostly light sexual innuendoes includes a suggestive book cover of a romance novel, a male model is encouraged to take his shirt off during press interview, and a character tries to help him do so but it fails, woman says she’s attracted to intelligence, many innuendoes about male private parts, a character makes a comment about TAKEN and “weird sex stuff” while evading the bad guys, mention of a pelvic exercise, woman jokes that she’s not asking a man to procreate with water but just asking him to swim, man hoists a woman up a cliff, and she mentions that his head is close to her private parts, woman uses sexual innuendo to describe sitting by the fire with a man and another time by the beach (for example, she mentions hot lava “pulsing”), and woman and man sleep together in the same hammock for warmth, but nothing sexual happens
Nudity:
Upper male nudity in multiple scenes, rear male nudity in one scene, and it’s implied woman sees his private parts shortly after, and a character mentions that history had a lot of nudity
Alcohol Use:
Character has wine over ice, champagne depicted in another scene, villain drinks whiskey, mention of wanting wine to relax in another scene
Smoking and/or Drug Use and Abuse:
Some cigar smoking, but no drugs; and,
Miscellaneous Immorality:
Character calls an elderly woman a slut, kidnapping, greed, and deceit, but the truth comes out eventually.

THE LOST CITY stars Sandra Bulloch as an academic turned romance novelist who’s kidnapped to help find a precious treasure in a lost city on a lost island. THE LOST CITY is an exceptional action comedy, with a positive message stressing love over material gain, but it has some mixed elements such as many off-color innuendoes, several obscenities, a few strong profanities, and some politically correct content that require extreme caution.

As the movie opens, a romance novelist named Loretta Sage prepares to go on a book tour to promote her latest novel, THE LOST CITY OF D. Loretta isn’t anxious about getting herself back into the public eye after her archeologist husband’s death. Beth, Loretta’s book agent, best friend, manager, etc., has set up the whole thing. Alan (Channing Tatum), the cover model for Loretta’s book as the character Dash, joins her at a press event. After the first press event doesn’t go as planned, Beth urges Loretta and Alan to just make it to the next scheduled interview for the day. Before they do that, however, Loretta is kidnapped, and Alan sees the bad guys taking her away just in time to try and help.

Loretta arrives to multiple charcuterie boards and a rich guy named Abigail Fairfax. At first, she thinks it’s a publicity stunt for her new book, but soon realizes it’s not. Abigail mentions that while reading her novel, he realized Loretta’s background in language could help him find a valuable treasure. It’s supposedly a priceless headdress in a tomb in a lost city on a lost island. Abigail says he’s already located the island. Now, he just needs Loretta’s help to locate where the city and the tomb is by translating a clue. His henchmen chloroform Loretta and take her away on a plane.

Meanwhile, Alan, Beth and a social media assistant locate Loretta on an island in the middle of the Atlantic Ocean. Alan insists they need some expertise to rescue her. So, he calls on a former Navy Seal named Jack Trainer (Brad Pitt), who he met at a meditation retreat. Jack agrees to help Alan find Loretta.

The two men meet at an airport near Loretta’s last known location. Jack doesn’t think Alan is up to the task of a search and rescue. Jack also asks if Alan has feelings for Loretta. Alan admits it could turn into something romantic. He wants to be Loretta’s protector.

Jack, followed by a much-less skilled Alan, arrive on the scene and successfully rescue Loretta from Abigail’s henchmen. However, there are multiple bumps in the road, and Alan and Loretta find themselves going forward alone. Back in the States, Beth decides to go find Alan and Loretta herself.

The lost city may have something more than just treasure on it, however.

THE LOST CITY is an exceptional action comedy with a strong script. It has stellar production values and casting. Sandra Bullock and Channing Tatum have great comic timing. They also play the dramatic, romantic moments just as well. The movie has sturdy plot points and just enough twists to keep viewers fully engaged. THE LOST CITY makes good use of physical comedy too, and the movie’s setting is beautiful.

THE LOST CITY has a powerful message about love being greater than material possessions. The movie also stresses the need not to judge a book by its cover and dealing with grief in a positive manner instead of running away from it.

The movie’s positive moral, redemptive elements are mitigated by some negative content. For example, the lead male character met the Navy Seal man at a meditation retreat, and there’s a comment about a New Age healing regarding him. There’s also some politically correct feminist and environmentalist comments. Finally, THE LOST CITY contains many off-color, lewd innuendoes, several obscenities, a few strong profanities, and other, but mostly light, foul language. So, MOVIEGUIDE® advises strong or extreme caution.