THE MYSTERIOUS BENEDICT SOCIETY: Episodes 1.1 and 1.2 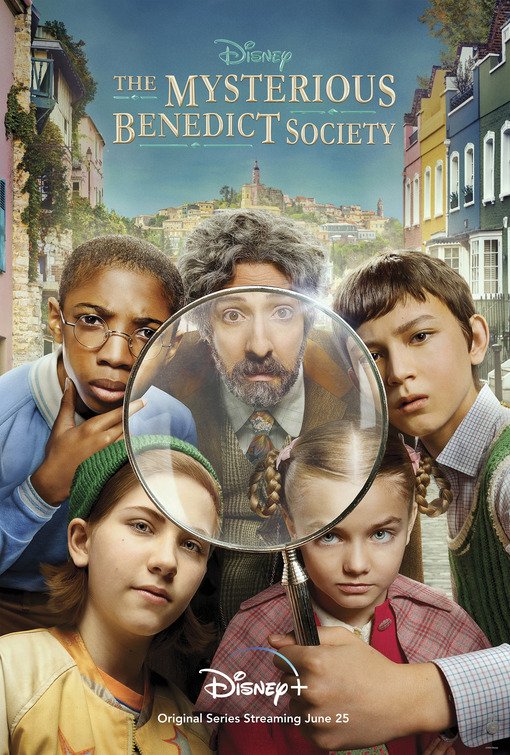 THE MYSTERIOUS BENEDICT SOCIETY is a mystery adventure streaming on Disney Plus. MOVIEGUIDE® screened the first two episodes. Nicholas Benedict, a disheveled, brilliant scientist, has uncovered a plot to spread worldwide anxiety, fear and chaos by sending subliminal messages though TV and radio. The signals are coming from a mysterious school for gifted children located on an isolated island. Using strange tests, he picks four special children to infiltrate the school, find out who’s behind the school and locate the actual source of the signals.

The first two episodes of THE MYSTERIOUS BENEDICT SOCIETY are humorous, whimsical and lots of fun. The actors are very good. So far, the program’s fairly devoid of offensive content. It also seems to have strong Christian allegorical elements. These redemptive themes include a worldwide war between good and evil, adoption into a family, having a higher purpose in life, and a “great commission” or mission to share an invisible truth to those who don’t see it. The first two episodes also promote truth, empathy, fellowship, and integrity. THE MYSTERIOUS BENEDICT SOCIETY does have some light violence.

(CC, BBB, Ro, PC, Fe, L, V, M):
Dominant Worldview and Other Worldview Content/Elements:
Allegorical elements of Christianity including that of the heavenly war between good and evil, adoption into God’s family, being given a purpose in life, and the Great Commission, with very strong moral values of truth, integrity, leader-ship, empathy, friendship, and teamwork, plus there’s a comment that most people care about the truth but can be easily distracted by the things around them, and a politically correct feminist moment when a little girl demands to be called Ms. instead of Miss
Foul Language:
No obscenities and two light OMG profanities in Episode 1, and no obscenities or profanities in Episode 2, but a reference to pooping one’s pants
Violence:
Light violence includes a boy accidentally trips, a teenager tackles another teenager outside of an orphanage, two teenagers briefly shove one another outside of the orphanage, and a boy shoves another boy out of the way to complete a physical test in Episode 1, and a man is shocked asleep and kidnapped by two men, girl throws flashlights to bean the two kidnap-pers, a guardian for the first man punches one of the kidnappers and knocks him down (this causes the kidnappers and two other men to run away),
Sex:
No sex
Nudity:
No nudity
Alcohol Use:
No alcohol
Smoking and/or Drug Use and Abuse:
No smoking or drugs; and,
Miscellaneous Immorality:
Lying, all four main children are orphans but deal with their pasts in a healthy and positive way, one of the four children is very rude and disrespectful to the others but does have some positive elements such as her ability to al-ways tell the truth, there’s an attempted kidnapping of an adult character, and a teacher at a weird school for gifted children confuses the four young heroes by telling students in a class that the free market must remain free, but it also needs to be controlled in certain circumstances (it’s unclear from this single scene whether the rest of the series is going to have a conservative, pro-capitalist element or a leftist, anti-capitalist element).