THE SECRET LIFE OF PETS

"Hilarious Cartoon with a Positive Message" 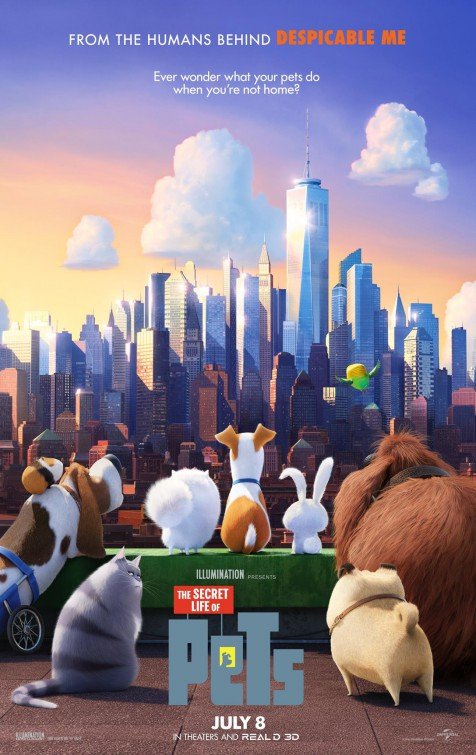 An animated comedy for families, THE SECRET LIFE OF PETS tells what happens when pet owners leave their pets at home alone. Max is a small terrier who loves his owner, Katie, who rescued him from the side of the road. Everything is going well for Max until Katie brings home a bigger dog named Duke. Max isn’t happy about Duke. The two dogs fight and find themselves lost in the middle of New York City, surrounded by animal gangs. Max and Duke must learn to get along in order to get home. Meanwhile, Max’s longtime friends come looking for him.

THE SECRET LIFE OF PETS is a very funny, delightful animated movie the whole family will enjoy. Some jokes may go over children’s head because they’re clearly aimed at adults. The characters and the movie’s cartoon fantasy world are very well done. THE SECRET LIFE OF PETS has a strong moral, redemptive worldview about sacrificing yourself for a friend, being loyal and loving others. There are some scary parts and some scatological humor, however. So, caution is advised for younger children.

(BB, CC, V, M) Strong moral, redemptive worldview stresses loyalty, loving others and sacrifice; no obscenities or profanities, but some scatological humor such as a dog licking his private parts and dog urinating; light cartoon violence includes dogs fight, and lots of slapstick humor, such as falling off buildings and structures; no sexual content; no nudity; no alcohol use; no smoking; and, some miscellaneous objectionable content includes one scene where the characters hallucinate because they overate, lying, a character has tattoos, jokes about harming humans, and animals congregate in gangs.

THE SECRET LIFE OF PETS tells what happens when pets are left alone, along with a story about a small terrier named Max who gets lost in the big city with a bigger dog named Duke. THE SECRET LIFE OF PETS is a very funny movie, with good characterizations and a strong moral, redemptive worldview, although it does have some scatological jokes and slapstick comedy requiring a light caution.

Max is a small terrier who loves his owner, Katie. Katie had rescued Max when he was a young puppy on the side of the road. Everything is going well for Max. He has friends who come over after Katie leaves, and he has a best friend in Katie.

One day, however, Katie brings home a giant dog named Duke. So happy to have been rescued, Duke joyously greets Max, but Max isn’t happy about Duke. The two start to fight and race down the road. Before they know it, they are in the midst of a gang of street cats. These cats are scary and not to be reasonable, but when Animal Control comes along, bigger problem occurs: Max and Duke get caught.

The Animal Control truck has some bigger, scarier dogs inside, but it doesn’t take long before a small rabbit, a pig and an iguana come to save another one of the dogs in the truck. The odd trio is able to save the dog and destroy the truck. They start to run away, but Max and Duke plead with them to save them. Snowball, the rabbit, tells Max and Duke they can only save them if they agree to be apart of their gang, and admit they hate humans.

Snowball leads Max, Duke and the others into the sewer, only to come across a huge group of scary animals, including snakes, rats and gators. At that point, Max and Duke have to pledge their allegiance to the gang, but Duke is able to distract them he escapes with Max.

Meanwhile, Max’s friend, Giget, realizes Max is gone and gets together their other friends to help go find Max. The odd bunch of apartment pets from privileged backgrounds go off into the big city of New York to find Max and Duke before something bad happens to them.

THE SECRET LIFE OF PETS is a very funny animated movie the whole family will enjoy. Some jokes may go over the children’s head because they’re clearly aimed at adults, including a scene where the characters are hallucinating because they overate. Caution is also warranted for some scatological jokes and the scary aspects of the animal gangs. Snowball, the rabbit leader of the one gang, is adorable, but a little scary. For instance, Snowball talks about how a pet can get rid of its owners. Despite this, the movie has a strong moral, redemptive worldview about sacrificing yourself for a friend, being loyal and loving others.

THE SECRET LIFE OF PETS is hilarious and very well done. The characters and the environment are brilliantly animated, with exaggerated features to create a fun fantasy world. The filmmakers clearly studied animal movements to get the gestures correct. Also, the attitude of the animals is very funny and realistic, from the moody cat to the timid terrier. All in all, THE SECRET LIFE OF PETS is a delightful movie for families.

Rent or Buy THE SECRET LIFE OF PETS: