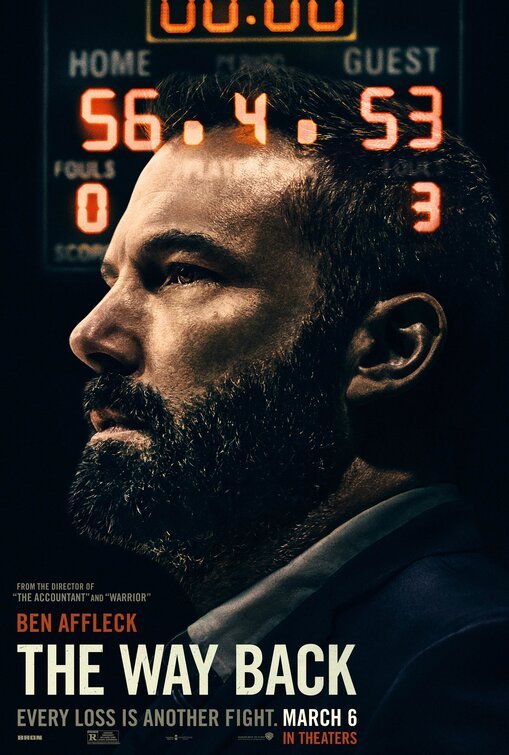 THE WAY BACK is an exceptional sports drama starring Ben Affeck as Jack Cunningham, a middle-aged man who drinks all day. Jack used to be the best player in the state, but he gave it all up for a destructive lifestyle. He hasn’t picked up a basketball in years, but one day the priest running Jack’s former Catholic high school asks Jack to coach the varsity basketball team. With Jack’s help, the team focuses on their gifts and starts winning games. More importantly, Jack must decide if he’s willing to give up drinking for the team’s benefit.

THE WAY BACK is incredibly well done, with amazing performances, an impressive script and an exceptional soundtrack. The movie is not just a sports movie; it’s much deeper than that. Viewers will laugh, cry and empathize with the characters and their challenges. THE WAY BACK has a strong Christian, moral worldview. The Christians at the school keep Jack accountable for his actions and help him re-establish his priorities. Sadly, however, THE WAY BACK has an excessive amount of strong foul language. So, MOVIEGUIDE® advises extreme caution.

(CC, BB, H, LLL, V, N, AA, D, M):
Dominant Worldview and Other Worldview Content/Elements:
Strong Christian, moral worldview with images of crosses, a prayer is made in the name of Jesus, and becoming a better person because of children is important, plus one humanist comment about life after death being nothing but it’s refuted
Foul Language:
98 obscenities (including 59 “f” words), seven GDs and one use of Jesus
Violence:
Man falls down a hill and hurts himself
Sex:
No objectionable sexual content
Nudity:
Upper male nudity
Alcohol Use:
Alcohol use and drunkenness, but it’s seen as bad and destructive, including man drives drunk
Smoking and/or Drug Use and Abuse:
Smoking but no drugs; and,
Miscellaneous Immorality:
Man tries to become a better person man but curses frequently around teenagers.

THE WAY BACK is a sports drama about a middle aged man who drinks at all hours of the day but, when he’s asked to be a basketball coach, thinks of stepping up to the task. THE WAY BACK has amazing performances, an impressive script and exceptional musical score, with a strong Christian, moral worldview overall, but it’s marred by lots of excessive foul language.

The movie stars Ben Affleck as Jack Cunningham. A middle-aged man, Jack use to be the best basketball player in the entire state. Years have passed, and he’s fallen into a self-destructive lifestyle as an alcoholic. When his sister confronts him about his problem, he gets enraged, saying he doesn’t have a drinking problem and then proceeds to drink more. Soon after this, the priest who runs Jack’s former Catholic high school, calls Jack to ask him if he would like to be the school’s varsity basketball coach.

Initially, Jack says no, but after thinking about it for a couple days, Jack decides to do it. However, he’s nervous because he hasn’t picking up a basketball in years and has never a team. It doesn’t take Jack long to realize that the team is horrible and has never won a game. However, he starts to understand what is each player’s strength, rather than the position they were assigned. So, he moves the players and gives them some passion for the game and a tough exterior against the other teams they play.

Eventually, the team starts winning games. More importantly, Jack has to truly decide if he’s willing to give up drinking for the team’s benefit. Once, he realizes he is a mentor to the teenagers on the team, Jack starts to re-evaluate his life choices. Will he stick to a new lease on life or will he fall back in to his own destructive behavior?

THE WAY BACK is an incredibly well made movie, with amazing performances. This movie is really not just a sports movie; it’s much deeper than that. As the story develops, viewers find out more and more about Jack. The writing in THE WAY BACK is also very impressive. Viewers will laugh, cry and empathize with the characters and their struggles. Along with that, the movie’s score is exceptional. It adds greatly to the movie’s overall effect.

THE WAY BACK has a strong Christian, moral worldview. The main character returns to his Catholic high school to coach basketball and finds redemption. The Christians at the school keep Jack accountable for his actions and help him re-establish his priorities. Sadly, though, THEWAY BACK has lots of strong foul language. So, MOVIEGUIDE® advises extreme caution.