"Reconciling the Past to Save the Future" 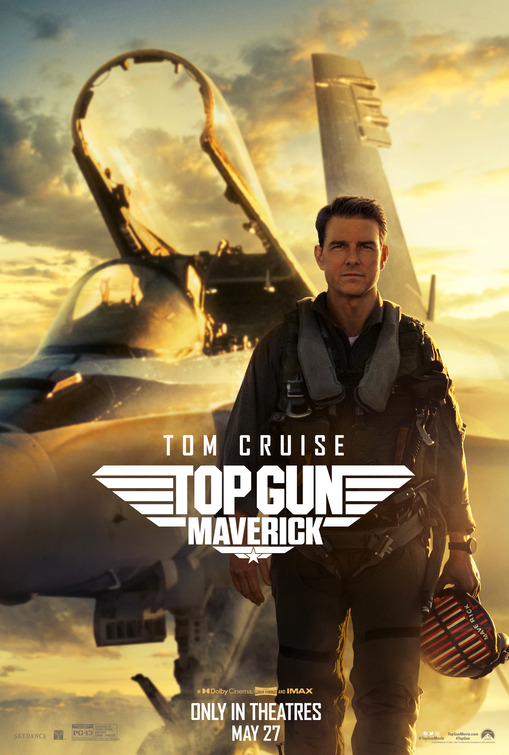 TOP GUN: MAVERICK is a sequel to the popular 1986 hit starring Tom Cruise. Cruise plays Pete “Maverick” Mitchell who after 30 years as a fighter pilot is now a test pilot. After he crashes a supersonic jet, Maverick is sent to the Top Gun school in San Diego to pick six fighter pilots for a dangerous mission to bomb a uranium enrichment plant in a foreign country. He faces two major obstacles. First, the mission looks impossible. Second, one candidate is the son of his late friend, Goose, who died on a training flight with Maverick.

TOP GUN: MAVERICK is a terrific, powerful, exciting movie. It’s full of high drama and heart-pounding action scenes. This role was made for Tom Cruise. He gets great support from Miles Teller as Goose’s son and Jennifer Connelly as Maverick’s romantic interest. TOP GUN: MAVERICK has a strong moral, Pro-American, patriotic worldview. It also tells a strong redemptive story leading to sacrifice, forgiveness and reconciliation. However, TOP GUN: MAVERICK is marred by too many obscenities and three strong profanities. So, MOVIEGUIDE® advises strong or extreme caution.

(BBB, PPP, CC, CapCap, LLL, VV, S, N, A, M):
Dominant Worldview and Other Worldview Content/Elements:
Very strong moral, Pro-American, patriotic worldview, with emotionally powerful scenes and scenes of dangerous flying, in a story about an elite Navy fighter pilot training 12 candidates for a deadly mission to take out a uranium enrichment facility in a foreign country, similar to the ones Iran is building, and with the man training the fighter pilots is concerned and does all he can to ensure the pilots chosen for the mission will come back alive, including risking his own life twice, and the story is a celebration of American fighter pilots who risk their lives to serve their country as well as help their brothers in the air, and contains strong redemptive elements supporting sacrifice, forgiveness and reconciliation, plus woman owns a bar that’s a hangout for elite Navy pilots in training
Foul Language:
About 45 or 46 obscenities (including one or two “f” words and at least 15 “s” words and two SOBs), two Jesus profanities, one GD profanity, five light profanities (mostly OMG), and an obscene gesture is seen in one of several nostalgic photos
Violence:
Strong and light violence includes lots dangerous flying, references to the danger of passing out during the high G forces endured in steep climbs, one pilot actually does pass but wakes at just the right time, test pilot wrecks a supersonic jet by taking it past its limit, pilots have to bail out of three or so jets, multiple intense dogfights, explosions, jets have to evade anti-aircraft missiles, Navy ship sends missiles to take out a foreign country’s airfield, and anti-aircraft missiles fire at Navy jets
Sex:
Lightly implied fornication in one scene after brief kissing (the couple is shown talking in the bedroom afterwards, but that scene isn’t salacious)
Nudity:
Upper male nudity in a few scenes, especially one scene where fighter pilots play a game of football on the beach as a team-building exercise
Alcohol Use:
Alcohol use at a bar where Navy pilots congregate
Smoking and/or Drug Use and Abuse:
No smoking or drugs; and,
Miscellaneous Immorality:
Resentment but it’s overcome, intense rivalry but it’s overcome, and military bureaucracy is sometimes stifling, but it’s overcome.

TOP GUN: MAVERICK is a great sequel to the popular 1986 hit starring Tom Cruise, where Tom’s character, an expert Navy fighter pilot named Pete “Maverick” Mitchell, is demoted and ordered to train a group of elite Navy pilots for a deadly mission to take out a uranium enrichment facility in a foreign country. TOP GUN: MAVERICK is a terrific movie, with emotionally powerful scenes, exciting action and a strong Pro-American, patriotic, morally uplifting worldview, but it’s marred by many obscenities and three strong profanities.

The movie begins by setting the stage for what’s to come, by showing some American fighter pilots taking off from a naval carrier. Cut to Captain Pete “Maverick” Mitchell preparing to take a supersonic fighter jet up to Mach 9. Just as he reaches the takeoff site, he’s informed that Admiral Cain is shutting down the program. Cain thinks unmanned jets are the future, and Maverick is a relic from the past. Maverick has had multiple run-ins with military higher ups during his 30-year career. Later, viewers learn that Maverick’s career as a test pilot and fighter pilot has been kept alive by his former rival from the Top Gun flight school in San Diego, and now friend, Ice, who’s become an admiral.

Admiral Cain is driving to the base to inform them formally about his decision, but he’s late. The supersonic jet program’s manager tells Maverick that the Navy wanted the jet to hit Mach 10, but Maverick isn’t scheduled to test that for a couple months. “If they want Mach 10, let’s give them Mach 10,” Maverick says. Okay, the manager says, but don’t push the jet to 10.1 or 10.2. Of course, Maverick doesn’t listen and, after becoming the “fastest man alive” at Mach 10, he pushes the jet for Mach 10.1 and above. However, when he reaches Mach 10.3, the jet starts to break up, and Maverick must bail out or die.

Back at the base, Admiral Cain reads Maverick the riot act. He wants to retire Maverick, but Ice has come through again, and Maverick is assigned for a dangerous special mission, with training to begin at the Top Gun school. Maverick thinks he’s going to train as one of the fighter pilots, but Ice really wants him to train 12 volunteers and pick the best six pilots and navigators to complete the mission.

When Maverick gets to the Top Gun facility, he comes across two obstacles. First, his old flame, Penny, now owns the Hard Deck Bar that’s frequented by the Top Gun pilots in training. Second, the son of his friend, Goose, who died in the first TOP GUN movie when he and Maverick had to bail out, is one of the 12 candidates. Making matters worse, the young man, whose name is Bradley Bradshaw and call sign is “Rooster,” resents Maverick for delaying his career as a fighter pilot by four years. At a major point in Bradley’s training, Maverick decided Bradley wasn’t ready to become a fighter pilot, a decision that was supported by Bradley’s mother, who didn’t want to lose her son like she lost her husband, Goose.

Maverick’s personal issues make for a very emotional story. Also, the mission to destroy the uranium plant appears to be almost impossible. The plant is surrounded by anti-aircraft missile installations with radar, meaning that the American pilots must fly older F-18 fighter jets 100 feet aboveground along a twisty canyon. Also, the American pilots only have two minutes and 30 seconds to destroy the target with four bombs before nearby foreign pilots, who will have newer, swifter jets, start engaging them.

TOP GUN: MAVERICK is a terrific, powerful, exciting movie. It’s full of high drama and impressive, heart-pounding action scenes. This role was made for Tom Cruise, and he gets great support from Miles Teller as Rooster and Jennifer Connelly as Maverick’s romantic interest, Penny. The other actors playing the pilots and officers are excellent as well. In addition, there’s a poignant scene between Cruise and Val Kilmer as Iceman. MAVERICK also has some funny scenes to relieve the dramatic tension. For instance, in a few scenes, someone says to Maverick, “Don’t give me that look,” and he replies, “It’s the only look I’ve got.” Director Joseph Kosinski takes a well-structured script and does a brilliant job weaving together all its parts to deliver one of the most entertaining movies in recent years.

TOP GUN: MAVERICK has a strong moral, Pro-American, patriotic worldview. The movie celebrates American fighter pilots who risk their lives to serve their country. Maverick clearly is committed to train the pilots under his command well. When his CO at the Top Gun school tells the pilots how dangerous their mission is and that some of them might not come back alive, Maverick objects, saying he wants to do whatever he can to ensure that everyone comes back alive. Maverick must show the pilots, however, that the mission plan will be able to do just that. And, he risks his own life twice to do it.

TOP GUN: MAVERICK also tells a strong redemptive story. Maverick still feels guilty for Goose dying. He thinks Goose’s son, Bradley, blames him for Goose’s death, but Bradley resents Maverick for setting his career back for four years by telling the Navy he wasn’t ready to be a Top Gun fighter pilot. Eventually, their conflict is resolved by sacrifice and forgiveness, which lead to reconciliation.

That said, TOP GUN: MAVERICK is marred by lots of foul language, including about 45 obscenities, one or two “f” words and three strong profanities. Also, Maverick eventually rekindles his romance with Penny and ends up staying overnight at her place one evening, right before the mission is set to occur. So, MOVIEGUIDE® advises strong caution for adults and extreme caution for teenagers.