"Raiders of the Lost Gold" 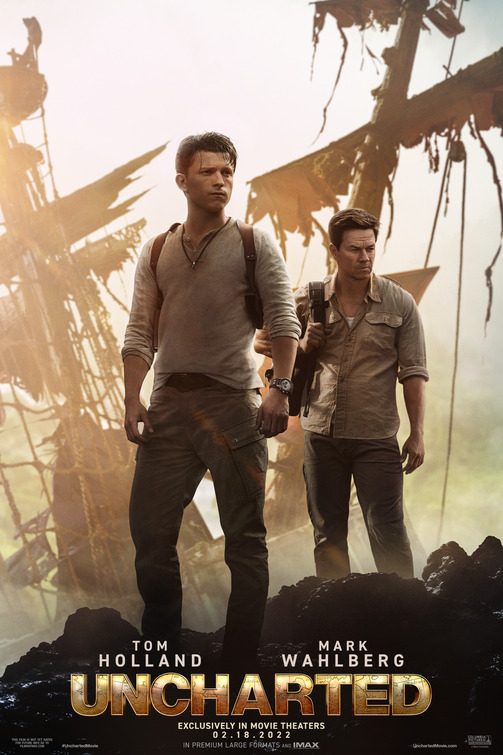 UNCHARTED is a rousing action adventure based on a video game. Nate Drake and his older brother, Sam, are obsessed with finding the lost gold allegedly hidden by explorer Ferdinand Magellan’s men 500 years ago. Sam left their Catholic orphanage years ago to search for the gold. Seasoned treasure hunter, Victor “Sully” Sullivan, recruits Nate to help him look for the gold. However, they must fend off a ruthless Spaniard and his henchmen, who will stop at nothing to get the gold.

UNCHARTED tells an exciting, terrific story. This big adventure will thrill moviegoers looking for a fun time at the movie theater. Also, UNCHARTED has a Christian worldview. For example, Nate has a strong respect for human life, and his pro-life attitude eventually rubs off on Sully giving the movie a redemptive premise. Also, UNCHARTED has Christian references and symbols, including a positive statement of Christian faith in one scene. However, Nate and Sully must steal a golden artifact from a ruthless Spaniard at an auction house to find the gold, and the movie contains excessive foul language. MOVIEGUIDE® advises strong caution.

(CC, Pa, B, LLL, VV, N, A, M):
Dominant Worldview and Other Worldview Content/Elements:
Strong Christian worldview about treasure hunters hunting for lost gold stolen by Ferdinand Magellan and his men 500 years ago on his trip around the world, containing moral, pro-life elements valuing life over obtaining gold and fortune that become a crucial moment during the movie’s climax, and also supported by some positive Christian elements and references which include villain’s father says he has faith and trust in God rather than his ruthless son and then makes the Sign of the Cross
Foul Language:
About 38 exclamatory obscenities (mostly “s” and “h” words), two strong exclamatory Jesus profanities though one is countered affirming Jesus Christ, and nine exclamatory light profanities
Violence:
Lots of action violence, some of it involving fighting with murderous villains who don’t value life at all and are willing to murder anyone standing in their way, involves lots of fighting, some gunfighting, young man leaps onto cylinder light bulbs hanging from ceiling to create a distraction, two people are in danger of drowning as they explore underground chambers searching for the lost gold, villain’s hench woman slits a few people’s throats (very little blood shown), villain has the woman murder his father, young hero fights villains as they hang onto large cargo contains flying out the back of a cargo plane high above the ground, young hero leaps and jumps a lot while being chased by villains or trying to avoid their gunshots or knives, young hero knocked out, some sword fighting on two 500-year-old sailing ships, lots of fighting on sailing ships that villains are using two helicopters to carry away (the ships are just as valuable as the gold they carry), etc.
Sex:
No sex
Nudity:
Naturalistic upper male nudity in two or three scenes
Alcohol Use:
Brief alcohol use
Smoking and/or Drug Use and Abuse:
No smoking or drugs; and,
Miscellaneous Immorality:
Lying, deception, young bartender who also buses tables steals expensive bracelet from young woman in bar sitting at a table alone, and older man steals it from him, plus two boys break into a museum to steal an old map of the world Magellan and his men made 500 years ago, but they get caught.

UNCHARTED is a rousing action adventure movie about a young bartender and sometime thief who joins an older rogue searching for lost gold allegedly stolen by Portuguese explorer Ferdinand Magellan 500 years ago on his trip around the world, a treasure that obsessed the young man’s long-lost brother. Based on a popular video game series, UNCHARTED tells an exciting, terrific story where the treasure hunters are racing against a ruthless band of other treasure hunters, but even so it has a very Christian worldview with many Christian references and confessions, but some mixed pagan content with some moral pro-life content, stealing, lots of exclamatory foul language, and an overtly Christian message in one scene.

Young Nate Drake, who’s descended from the famous English privateer Sir Francis Drake, has long been fascinated by a story about the lost gold that Ferdinand Magellan and his sailors may have hid 500 years ago on their ill-fated trip around the world. Nate’s long-gone older brother, Sam, had to leave Nate after they got caught trying to steal a map of the world drawn up by Magellan and his men.

Now a young man, Nate is tending bar at a fancy restaurant in New York City. An adventurer, Victor “Sully” Sullivan, sees Nate charming a young woman sitting alone at a table and stealing a valuable bracelet on her wrist. Sully asks Nate if he’s interested in helping him search for Magellan’s lost gold. After Magellan was killed during a battle in the Philippines, 18 sailors returned to Spain and supposedly hid the gold somewhere.

Nate refuses. However, he notices that Sully stole the bracelet from him. So, he finds out where Sully lives and sneaks into his apartment to ask Sully to return the stolen bracelet. Sully again asks Nate to help him search for the lost gold. This time, though, Sully reveals to Nate that he knows Nate’s brother, Sam, is also searching for the gold. So, this may be a chance for Nate to find Sam.

Nate agrees to help Sully. The first order of business is to go to a fancy auction and steal one of two golden crosses made by Magellan’s men. Sully tells Nate that the two crosses are also two keys that can unlock the location leading to the lost gold. Sully says he has one of the crosses in his possession. He also tells Nate the cross that’s being sold at the auction is sure to be bought by Santiago Moncada, a descendant of a rich Spanish family that helped finance Magellan’s expedition.

At the auction, Nate ends up having to risk his life to create a distraction for Sully to pose as a guard and steal the cross. However, Santiago and his villains for hire, which include a woman who’s adept at slitting people’s throats with her knife, are ruthless people. They will stop at nothing, including murder, to get the lost gold, a treasure that may be worth $5 billion.

Based on a popular video game series, UNCHARTED tells an exciting, terrific story. UNCHARTED is a big budget adventure that will thrill moviegoers looking for a good time at the movie theater. Tom Holland, the current Spider-Man, and Mark Wahlberg deliver fun performances as Nate and Sully. They make a great team.

UNCHARTED has a strong Christian worldview. For example, Nate has a strong respect for human life, and his pro-life attitude eventually rubs off on Sully, giving the movie a redemptive premise. UNCHARTED also has some positive Christian references and elements. The most positive Christian reference is when the main villain’s honorable father tells his ruthless son that his faith and trust is in God, not him, and performs the Sign of the Cross. On the other hand, the plot is driven by thieves stealing from thieves. Nate and Sully must steal the one golden cross to locate the treasure. So, although they don’t try to murder anyone, unlike the other treasure hunters, they aren’t totally pure paragons of moral virtue. However, UNCHARTED contains an excessive number of obscenities and profanities. So, MOVIEGUIDE® advises strong or extreme caution.

You have the power to help Movieguide®!

Movieguide® provides movie reviews and insights that help people make informed decisions about what films to see. This valuable resource is available for free, but it takes time and money to keep it online. That’s where you come in!

This end of financial year, your donations will be matched, so every gift you make is worth double! Please take a minute to donate and help keep Movieguide® online and growing. Thank you for your support!