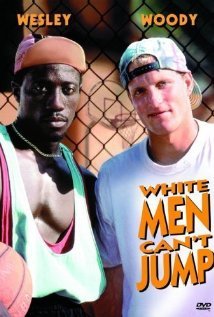 How about a movie that affixes hymns to sexual intercourse and basketball playing, nixes Bible trivia, heckles you with "mother" jokes, has endless obscenities, and pigeonholes race? WHITE MEN CAN'T JUMP contains all this and even more offensive material. Set against California's Venice Beach, this pathetic, comedy teams two hoop hustlers in search of easy money.

WHITE MEN CAN’T JUMP affixes hymns to sexual intercourse, nixes Bible trivia, heckles you with “mother” jokes, has endless obscenities, and pigeonholes race. Set on the asphalt courts near LA’s Venice Beach, Billy meets Sidney, who brags: “I am the greatest!” Despite Sidney’s belief that Billy is a “slow, white, geeky chump,” he loses their match and is out $200. Gradually, the two develop a game plan: conning other jocks into a match, acting stupid, playing smart, and hustling them for cash. Teaming up makes sense. After all, no one expects the white guy to be any good. On the home front, Sidney lives in a ghetto apartment complex with his wife, Rhonda, and their baby. Worse off is Billy, who lives in a run-down hotel with Gloria, his Puerto Rican girlfriend.

Despite it’s potentially intriguing subject matter, WHITE MEN CAN’T JUMP drops the ball on every issue. Of great concern is it’s tendency to affix religious phrases and hymns to cultural experiences. This reflects either an exposure to Christianity with little effect, or a deliberate attempt to mock the Faith. Also offensive is the movie title. If it were BLACK MEN CAN’T JUMP, the NAACP would be up in arms.