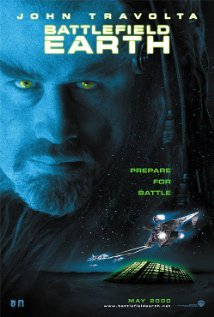 Based on Scientology founder L. Ron Hubbard’s novel, BATTLEFIELD EARTH is a science fiction story unlike other, more obvious false religious works by Hubbard. In the year 3000, a man named Jonnie from a tribe of humans living in the mountains sets out to find the gods who allowed demons to descend upon the earth, wiping out most of mankind. Instead, he finds that earth has actually been taken over by a race of aliens from another planet, who call themselves Psychlos. Using action violence and standard special effects to mimic other movies, the hero and his friends set out to demolish the protective atmosphere the Psychlos have built and to destroy their home planet.

BATTLEFIELD EARTH is not a poster ad for Scientology. Rather, it is an anthropocentric view of a heroic character who, without an acknowledgement of God, sets out to save the human race from extinction by his own power. The acting is decent, though there are quite a few corny lines that cheapen the story’s effectiveness. Ultimately, BATTLEFIELD EARTH disappoints because its story takes place on a world created by the One True God whom the movie ignores

(PaPa, HH, B, C, L, VV, MM) Predominantly anthropocentric pagan worldview of man’s ability to defeat aliens in order to save the human race with many pagan elements mentioning “the gods,” which is later refuted, as well as some moral & redemptive elements of a heroic mission & display of love for others; 2 mild obscenities & use of “b*st*rds;” action violence, including man & horse fall, men & horse are shot with a tazer, man runs through numerous glass windows, alien punches man, repulsive looking food, some grotesque characters including alien with 5 chins, men eat rats, alien shoots at a herd of cattle shooting one leg off each animal, implied head blown off, woman has extra long tongue, & space planes shoot at each other with some explosions; no sex but one sexual reference by alien; no nudity; and, blackmail, deceit, manipulation, & theft.

John Travolta stars in BATTLEFIELD EARTH, an adaptation of the novel by L. Ron Hubbard. Unlike other books by Hubbard, this controversial story is not about Scientology, but does take on a science fiction, anthropocentric theme reflective of that false religion. The movie, which takes place in the year 3000, depicts one man’s attempt to save the human race from extinction by an alien race from another planet.

Jonnie Goodboy Tyler (Barry Pepper of THE GREEN MILE) seeks to find “the gods” in order to appeal to them for help. It is the year 3000 and Jonnie and a group of other people are one of the few colonies of humans left, living in a tribe hidden in the mountains. They believe that at one point man became so selfish that the “gods” became angry and allowed demons to descend upon the earth. According to their mythology, most of mankind had been wiped out in a mere nine-minute battle.

Jonnie sets out to find the gods and comes across two men looking for food. Jonnie tells them he will share his food with them if they show him one of the gods. They agree and lead him to the remains of where a shopping mall once stood. There, they are attacked by one of the alleged gods. Though Jonnie makes a great effort to escape, all three are hit by a tazer-like instrument and taken aboard an aircraft. Once they arrive at the city of the “gods,” they find they cannot breathe the gods’ atmosphere until some nose clips are given to them, allowing them air. Jonnie takes the opportunity while in transit to try and escape, using one of the gods’ guns to kill him.

Amazed at this type of dauntless intelligence from a human brings disbelief to the Chief of Security, Terl, played by John Travolta. Though known to the humans as “gods,” they are actually Psychlos, a race of aliens from another planet. Terl asks one of the others to hand his gun to Jonnie and then attack him. The other Psychlo refuses at first, saying he will be shot, but Terl cannot believe that “a human could actually have the intelligence to do such a thing.” So the Psychlo hands over the gun to Jonnie, only to meet his death. Terl is impressed and, after having him restrained, decides that Jonnie may be useful to him later.

Terl is up for a transfer soon. He wants nothing more than to be assigned some place other than earth, which is almost thoroughly depleted of its natural resources. However, when his review by the Federation comes up, he is ordered to stay there for an even longer term because of an apparent liaison with the general’s daughter. Outraged by this decision, Terl informs Ker (played by Forest Whitaker of BIRD and the recent GHOST DOG) that they will go behind the backs of the Federation and use humans to mine gold. Terl decides to train Jonnie who, though rebellious, impresses Terl with his apparent intelligence. Terl begins “programming” Jonnie, who soon learns the Psychlos’ language and history.

Using this new knowledge, Jonnie forms a rebellion with other enslaved humans against the Psychlos, and assembles militia gear left over from the past civilization. With hurried training, they set out to use the equipment to demolish the protective atmosphere that the Psychlos have built and to destroy the Psychlos home planet with nuclear power.

BATTLEFIELD EARTH is being cited by some as a controversial movie for its association with L. Ron Hubbard, the controversial founder of the Church of Scientology. Hubbard’s 1950 bestseller DIANETICS is known as the textbook for Scientology, a religion that Hubbard invented in 1955. Interestingly enough, in Hubbard’s book SCIENTOLOGY: A NEW SLANT ON LIFE, one of the blurbs written by well-known entertainers and journalists is from Travolta, who says, “I have been a successful actor for 22 years and Scientology has played a major role in that success. I have a wonderful child and a great marriage because I apply L. Ron Hubbard’s technology to this area of my life. I would say that Scientology put me into the big time.”

Though Hubbard is known for founding Scientology, this movie is not a poster ad for this belief, but is rather an anthropocentric view of a heroic character who, without the acknowledgement of a creator, sets out to save the human race from extinction by his own power. The acting is decent, though there are quite a few corny lines that cheapen the story’s effectiveness. The special effects are typical of a big budget film, though there are painstakingly obvious copies of scenes from movies like THE MATRIX and STAR WARS. The STAR WARS similarities are interesting since Hubbard wrote BATTLEFIELD EARTH to capitalize on the success of the original STAR WARS movie in 1977.

Despite the fear that there are underlying subconscious elements of Scientology in this movie, BATTLEFIELD EARTH is more of a reflection of Scientology, in that the movie teaches that man has the power to do all things without the need nor acknowledgement of God, the Creator. Thus, the movie contains a strong humanistic philosophy, with a moderate level of action violence. Ultimately, BATTLEFIELD EARTH disappoints because its story takes place on a world created by the very One True God whom the movie ignores.