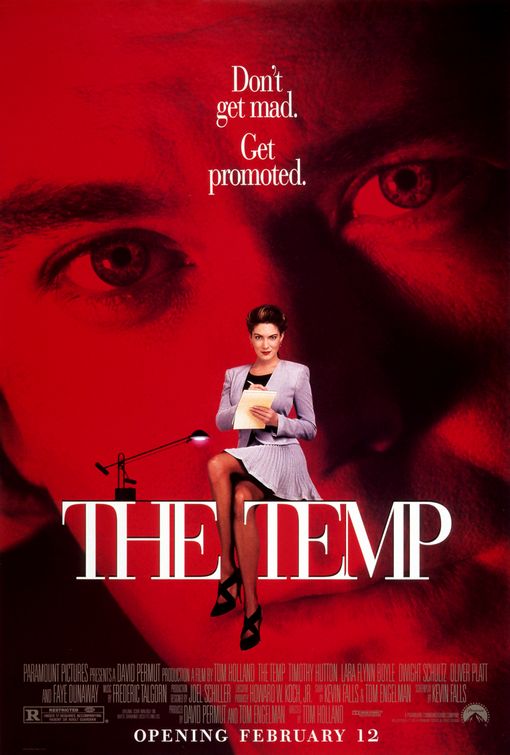 In the THE TEMP, Kris Bolin (the "Temp") helps her boss get to the top by eliminating the competition, literally. THE TEMP makes some surprising moral points as boss Peter (Timothy Hutton) fails to succumb to Bolin's sexual moves. Although the audience has a good idea who's to blame for the killings, the film maintains a good level of suspense throughout; plus, Boyle and Hutton perform admirably as actors.

(B, LLL, SS, A/D, Ho, M) Chastity triumphs in this filmed marred by: 37 obscenities and 17 profanites; a secretary who attempts to fornicate her way to the top (though there is no fornication or nudity there is a semi-voyeuristic scene); mutilation and murder committed for corporate gain; depiction of a corporate environment where the ruthless win; and, one drunken scene.

In THE TEMP, Peter Derns (Timothy Hutton) is a junior executive at “Mrs. Appleby’s,” a small confectioner. At a moment crucial to his career, he must pitch a new cookie concept to the President of the firm, Charlene Towne (Faye Dunaway), but his right-hand man leaves to be with his wife for childbirth. Enter Kris Bolin, the “Temp.” A paradigm of efficiency, she helps Peter score a coup and convinces the firm (now in hostile takeover) to back his cookie idea. As the takeover matures, people start dropping, literally. Peter finds himself being catapulted up the corporate ladder, with Kris’ help. Peter is sorely tempted by Kris, but always makes the right decision. Because he follows biblical principles, he gains the moral high ground amid all of those around him.

Lara Flynn Boyle plays an absolutely deadly Kris Bolin–deadly in feminine wiles as well as in the more literal sense. Yet, it is Timothy Hutton who shows the fullest range of acting talent. No acts of simulated sex between two persons are portrayed on film, and no nudity; however, the camera and dialogue are as prurient as any more graphic depiction could have been. This is not a film necessarily trying to espouse biblical principles for this morality play is not really for the moral. Sex sells film and even implied possible sex, sells film. The plot is mostly predictable, yes, but the audience was thoroughly absorbed.