TWO GIRLS AND A GUY 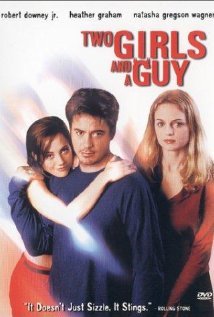 Attempting to examine the role of relationships today, TWO GIRLS AND A GUY merely demonstrates three lost characters. Robert Downey, Jr. as Blake performs admirably but Natasha Wagner and Heather Graham only complain about Blake and prance around sexually. This movie contains a lot of sexual babble, but offers no real solutions to Blake's infidelity. The women prove equally dishonest. While offering no solution, it does have an overarching thread of conscience which states that all this sleeping around is bad, and honesty and monogamy are preferable. Regrettably, it doesn't probe and challenge conventions as much as it should.

Last year, audiences were stunned at the complete unashamed misogyny found in the low budget movie IN THE COMPANY OF MEN. There, a man led a woman along and dumped her just for the fun of the game. Now in TWO GIRLS AND A GUY, two women are brought to their senses when they realize their boyfriend is the same man, a person who has separately told each of them of his exclusive undying love and devotion. Starring the troubled Robert Downey, Jr., this stagy, talky drama gives some frank talk about sexual fidelity, commitment and integrity.

The story begins with Carla (Heather Graham, most recently seen in LOST IN SPACE) and Lou (Natasha Gregson Wagner, daughter of the late Natalie Wood) waiting outside a SoHo apartment. Chatting away, these women discover that they are waiting for the same fantastic boyfriend, who is returning from a business trip. Each woman believed that their relationship with him has been monogamous. Troubled by this news, they break into his beautiful apartment and talk it over. They discover that Blake (Robert Downey, Jr.) has been telling both of them the same lines. Angered, they hide when he returns home.

Attempting to examine the role of relationships today, TWO GIRLS AND A GUY merely demonstrates three lost characters. Downey performs admirably and when he breaks down while facing a mirror and asking himself why he keeps getting into trouble. The women’s lines are not as complex, and they only get to complain about Blake and prance around sexually. This movie contains a lot of sexual babble, but offers no real solutions to Blake’s infidelity. The women prove equally dishonest. It is all a mess.

This movie has been praised by some critics as probing and daring. It has been panned by others as being worse than an off-off Broadway play. It is neither. TWO GIRLS AND A GUY is an acting showcase for a struggling actor with a drug problem and a writing exercise for a David Mamet wannabe. It offers no solutions, but it does have an overarching, though indefinable thread of conscience which states that all this sleeping around is bad, and honesty and monogamy are preferable. Even so, it doesn’t probe and challenge as much as it should.