MAN OF THE YEAR 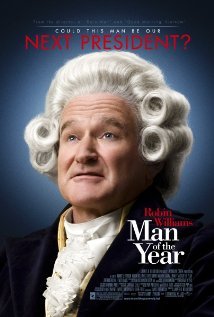 MAN OF THE YEAR stars Robin Williams as Tom Dobbs, a comedian who has a popular political show on Cable TV. A liberal, Dobbs is fed up with both political parties in America. Dobbs gets millions of emails urging him to run for president. Dobbs runs, but he can only make the ballot in 13 states. Those states, however, include Texas and California. After a raucous debate performance, Dobbs surprisingly wins the electoral college and the presidency. All the polls have been converted to electronic voting, however. Eleanor Green, a computer geek played by Laura Linney, discovers the system has a massive error. She tries to convince Dobbs that he didn't really win after all.

MAN OF THE YEAR veers between being a political comedy and a political thriller. This makes for a strange mix in tone. Liberals and atheists probably will love the politically correct antics of Robin Williams. Conservatives and Christians probably will be turned off by the one-sided nature of the movie's politically correct, profane worldview. A healthy debate in movies between different political views is good, but the debate serves no one when it is so one-sided.

(HH, RoRo, PCPCPC, AcapAcap, EE, HoHo, Ab, B, LLL, V, SS, A, DD, M) Strong humanist worldview with strong false Romantic notions about the benevolent nature of the average person/voter and with very strong politically correct, liberal-oriented, anti-capitalist, environmentalist content including some jokes that favor same-sex marriage and vaguely mock those who oppose it, a couple anti-Christian and anti-Catholic jokes about Pope Benedict XVI, liberal comments that talk a lot about the government doing something about health care and education and the environment but offering no specific solutions, liberal-oriented comments against "special interests" that control elected officials but all the specific comments about "special interests" are anti-capitalist diatribes against the oil companies and other large corporations with none of the comments saying anything about labor unions, teacher unions, liberal minority groups, and other left-oriented groups that seem to control liberal politicians, plus one possible conservative, moral or politically neutral comment when protagonist asks the public if anyone is really happy with America's education system, and a couple possibly neutral comments about changing the political system for the better, including a joke that elected officials should be changed as often as diapers and a comment that voters shouldn't just vote for a candidate for the sake of change alone; about 23 obscenities (including one "f" word), one strong profanity, 10 light exclamatory profanities, and some off-color language and double entendres; light violence such as unknown assailant forcibly drugs a female whistleblower so that she becomes angry and stressed out the next day at employer's cafeteria so much so that she has to be sent to hospital, van deliberately smashes into phone booth where woman is and woman has to be taken to hospital on a stretcher in an ambulance; no sex scenes but light to strong sexual jokes that are crude such as jokes about same-sex marriage and a homosexual farmer, somewhat explicit joke about masturbation and man says, "I did not have sex with that woman. I wanted to. . . ."; no nudity but some brief female cleavage; alcohol use; smoking, woman forcibly drugged with cocaine and some other drugs to destroy her credibility, and candidate admits to smoking marijuana and vaguely doing other drugs when he was younger; and, lying, greed rebuked and a weird comment against television that complains about TV political shows which put two opposing pundits in a debate as if both pundits were equivalent but the fictional example given is putting on a Holocaust denier with a credible historian, which is an extreme, weak example that is contrary to (and a false exaggeration of) what usually happens on TV.

MAN OF THE YEAR is a political comedy with a very strong, politically correct, liberal point of view from a secular humanist perspective. The cumulative political effect of the movie’s liberal viewpoint is very strong, but its various parts do not seem as strong. Most of the political content consists of one-line jokes, many of which occur during a political debate.

The movie stars Robin Williams as Tom Dobbs, a comedian who has a popular political show on Cable TV, much like THE DAILY SHOW with Jon Stewart. Dobbs is fed up with both political parties in America, though he himself seems to have a liberal perspective. When one woman in his audience one night says that he should run for president, Dobbs gets millions of emails urging him to run. Dobbs decides to run, but he can only make the ballot in 13 states. Those states, however, include Texas and California, which have many electoral college votes.

After a raucous debate performance, Dobbs surprisingly wins the electoral college and the presidency. All the polls have been converted to electronic voting, however, by a greedy corporation. Eleanor Green, a computer geek in the corporation played by Laura Linney, discovers that the system has a massive error in it. The corporate head and his lawyer try to cover up the error, but Eleanor decides to try convincing Dobbs that he didn’t really win after all.

MAN OF THE YEAR veers between being a political comedy and a political thriller. This often makes for a strange mix in tone that doesn’t quite jell.

Liberals and atheists probably will love the politically correct antics of Robin Williams in MAN OF THE YEAR. Conservatives and Christians, however, probably will be turned off by the one-sided nature of the movie’s worldview. This is true especially because the barrage of one-liners from Mr. Williams makes fun of politicians who support constitutional amendments against public flag burnings and in favor of traditional heterosexual marriage, as opposed to same-sex marriage. Also, the political speeches by Dobbs often refer to “special interests” that control politicians due to the high cost of political campaigns, but all the special interests mentioned are capitalist ones, especially the big oil companies. MOVIEGUIDE® is not a big fan of the oil companies and their unholy alliance with OPEC, but what about all the liberal “special interests” in the United States, such as the teacher unions, the labor unions, liberal minority groups, etc., that have a vice-like grip on liberal, moderate and even conservative politicians? The movie contains only about two or three relatively neutral or possibly conservative lines of dialogue. For instance, when Dobbs seriously asks the voters if anyone is happy with America’s educational system, he also jokes that most American students probably believe that Joan of Arc was Noah’s wife.

A healthy debate in movies and TV programs between different political views is good, but the debate serves no one when it is so one-sided. We would all be better served if all voters knew more about the historical origins and belief systems of both the conservative and the liberal perspective. Sadly, that is not the case, even among people with advanced degrees in political science and history!