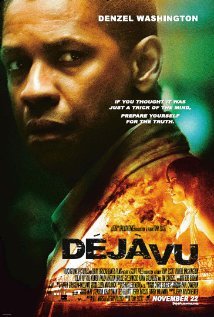 DÉJÀ VU stars Denzel Washington as Doug Carlin, a federal police official called to investigate a terrible terrorist explosion killing more than 500 people in New Orleans. In trying to locate the terrorist behind the explosion, Doug works with a special FBI team using a new, futuristic TV monitoring device capable of looking back into the past. Doug discovers that the murder of a beautiful woman named Claire is tied to the crime. Eventually, Doug decides to use the device to go back in time to save the lives of Claire and the other murdered people.

DÉJÀ VU is perhaps the most entertaining, stimulating, morally uplifting thriller this year. It is an emotionally powerful movie with an exciting science fiction plot. It also has a very strong Christian worldview with stimulating themes about God, personal destiny and our moral duty to help other people even at the risk of losing our own lives. If you're going to see one thriller this year, you might want to consider DÉJÀ VU. That said, MOVIEGUIDE® advises caution for older children because of some foul language, violence and brief rear female nudity shot in shadow.

(CCC, BBB, PP, LL, VV, S, N, M) Very strong Christian worldview with very strong moral content supports taking moral actions to stop evil whatever the cost may be, including many positive references to God in a story about trying to change the past through time travel, heroine prays to God and the hero closes his eyes with her as she does, a Christian funeral with Amazing Grace sung and more positive words about God and faith from the preacher, heroine gives thanks to God for her blessings, scientist reveals that he too believes in God, discussion about God in relation to questions of time travel and whether a person can change "destiny," and allegorical Christian implications of sacrifice, death and resurrection, plus a positive view of American police authorities; 14 obscenities, four strong profanities with one sounding like it could also be a prayerful plea to Jesus, and five light exclamatory profanities; strong action violence with some blood such as terrorist explosion on large ferry kills more than 500 people, men on fire jump into bay, gunfights, some gunfights involve machine gun fire from villain, vehicle runs into man and knocks man down, villain shoots a policeman to death before he sets his body on fire, other explosions, two police officials view woman's dead body whose fingers on one hand have been cut off for some reason, and villain pours gasoline on people he intends to kill; no sexual activity but official technician watching secret monitor of woman taking shower has to be reminded to stop staring at the woman's nudity which is shown in shadow to a great extent; upper male nudity and rear female nudity in shower partially shown in shadow and silhouette; no alcohol; no smoking; and, kidnapping and stealing rebuked.

If you’re going to see one thriller this year, you might want to consider DÉJÀ VU starring Denzel Washington. It is an emotionally powerful thriller with an exciting science fiction plot. It also has a very strong Christian worldview that prompts stimulating, fascinating thoughts about God, morality and destiny. The movie also contains allegorical Christian implications of sacrifice, baptism, death, and resurrection. The movie’s villain and his actions reflect the demonic side of these implications, making for even more nifty, redemptive metaphors.

Denzel Washington plays Doug Carlin, a top federal ATF official called to help investigate a terrible terrorist explosion that kills more than 500 people in New Orleans. The victims include many American sailors and their wives and children. Doug quickly identifies the bomb material that caused the explosion. He also discovers that the burned body of a beautiful young woman named Claire washed up on shore minutes before the explosion occurred. He finds out that Claire’s stolen SUV was on the ferry that exploded and killed so many.

The FBI team leading the investigation to capture the domestic terrorist asks Doug to join their team. Help us tell what to look for and what to ignore, the team leader, Paul, asks Doug. Paul also shows Doug a new, futuristic TV monitoring device they are using that actually lets them look back into the past to find the terrorist. Since Claire’s SUV may have been stolen just before the attack and used to carry the explosives, they decide to follow Claire’s life to locate the terrorist.

Time travel stories like this can be a little confusing and convoluted. They can also stretch the imagination to the breaking point whereby the story begins to have some holes that can’t be explained. DÉJÀ VU is no exception to these problems. For instance, there seem to be a couple unresolved plot questions in the movie’s climax that may irk viewers for years to come.

If, however, viewers sit back and enjoy the ride, they should be intrigued by the movie’s themes. Among the movie’s more interesting themes are the ones surrounding the nature of time, the influence and importance of God in our lives, personal destiny, and our moral duty to help other people even at the risk of losing our own lives. It is these issues that lift DÉJÀ VU above the mundane time-travel story, not to mention the mundane thriller. In fact, if one were to surmise one lesson from this redemptive movie, it would be that, as children of God and followers of Jesus Christ, we are called by God to love God with all our minds, not to mention our whole heart and strength, and to love others as we love ourselves. That is our divine destiny.

DÉJÀ VU is perhaps the most entertaining, stimulating, morally uplifting, redemptive thriller of the year. That said, MOVIEGUIDE® advises caution for older children because of some brief foul language, violence and a brief nude scene shot in shadow.