"Punching the Clock on Sexual Immorality" 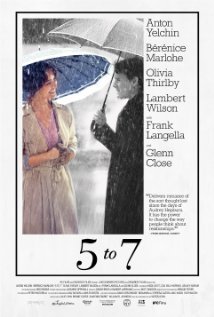 In 5 TO 7, Brian, an aspiring writer struggling to get published, has an affair with a French diplomat’s wife. Son of a wealthy New York family, Brian lives a privileged life writing all day and wandering the city. One day he spies Arielle, an attractive brunette. They hit it off, and she suggests they share an intimate relationship even though she’s married and has a family. Beginning an affair with her puts Brian in contact with New York’s art crowd and helps him get published. However, he faces a conundrum when he falls in love with Arielle.

The tone of 5 TO 7 harkens back to the Audrey Hepburn brand of romantic comedies. Sadly, however, the chemistry between Brian and Arielle is not there, making it difficult to believe they are really in love. The movie’s immoral setup gets it off to a bad start right away. Brian is a likable guy viewers will want to see succeed, but it’s disappointing to see his character ruined by his selfish decisions. 5 TO 7 is unacceptable viewing, with too much immoral content.

(PaPa, Ro, B, LL, V, SS, A, D, MM) Strong, mixed pagan worldview where characters put their own wants and desires above morality, with some Romantic elements where characters are guided by their emotions rather than what is logically right, though characters acknowledge a moral code and choose to live by it at certain points in the film; abut 18-20 obscenities and profanities and obscenities; man is slapped on face; strong and light sexual content includes depicted sex in one scene, implied affairs, unmarried couple shown in bed together, adultery, references to sexual acts, couple kisses during an affair, single man has affair with married woman, woman’s husband also has affair with single woman, and married couple okay with each other having affairs; no nudity but implied nudity while couple is in bed together, couple partially undresses while shown in silhouette, woman shown in underwear, man shown with unbuttoned shirt; some light drinking at restaurant; cigarette smoking depicted and discussed; children okay with parents having affairs and welcoming it into the family, man asks married woman to leave her family and marry him, and parents accept their son’s affair.

In 5 TO 7, Brian Bloom is a young, well-educated son of a wealthy New York family who has spurned his parents’ wishes that he go to law school in favor of a writing career. His privileged life gives him the opportunity to write all day and wander the city, yet he lives a very sheltered existence.

One day he sees Arielle, an attractive brunette across the street, and correctly surmises that she’s French based on the fragrance of the cigarette she’s smoking. After a brief exchange in her native tongue, the two hit it off, and she invites him to meet her the next day.

Brian quickly finds out Arielle is married to a French diplomat, is nearly a decade older than him and has two children. He’s shocked to learn she’s not the single girl he’d imagined, and is even more shocked when she suggests that the two share an intimate relationship. Arielle explains that she and her husband Valery have an open marriage, each allowed to dabble in affairs between the hours of 5 and 7 p.m. every day.

At first, Brian is put off by this, believing it to be unethical, but Arielle explains that they don’t live by strict moral codes in France. Though he turns down her offer, he can’t get her off his mind and eventually gives in to his impulse to begin the affair.

Slowly, Arielle opens Brian’s world to new possibilities as he’s suddenly rubbing elbows with the artistic elite and becoming more comfortable with his immoral lifestyle. He befriends an editor and before long finds one of his short stories published in The New Yorker. Not all is dandy though when he realizes he’s in love with Arielle and is no longer satisfied with their brief dalliances. Now, he must decide whether proposing to her is worth breaking up her family. The result of his decision gives him the material for his first published novel.

The tone of 5 TO 7 harkens back to the Audrey Hepburn brand of romantic comedies, delivering a dose of European intimacy within the upper class confines of New York City. It’s all very French, though Brian manages to add a splash of Americanism here and there. The script is quite light on comedy, feeling more like a drama, but it manages to produce a nice quality of laughs with its smart sense of humor. Sadly, the chemistry between Brian and Arielle is not there, making it difficult to believe they are in love with each other. Brian feels more like her younger brother than her lover, and his friendship with his editor Jane seems much more plausible to blossom into romance.

The movie’s immoral setup gets it off to a bad start right away. From the time Brian learns of his would-be married lover, you’re rooting for him to make the right decision. He comes across as a very likable guy who you want to see succeed, and it’s disappointing to see his character ruined by such a selfish act, though it’s quite predictable which course he’s going to take. The fact that the couple’s affair is approved of by Arielle’s husband and children, as well as Brian’s parents, adds even another layer of unscrupulousness. There is also a depicted sex scene and some foul language. 5 TO 7 is unacceptable entertainment.