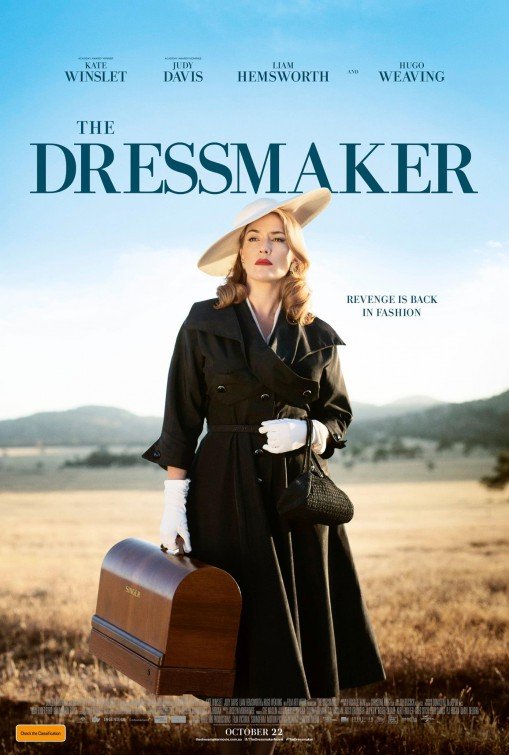 In THE DRESSMAKER, Tilly Dunnage returns to her miserable hometown, Dungatar, after a long absence as a ritzy fashion designer in Europe. Her mother, whom the town calls Mad Molly, is a shell of the woman Tilly remembers from childhood. Their relationship is tense. Tilly’s unexpected, glamorous presence intrigues the townspeople. Meanwhile, a local soccer star courts her, without initial success. Tilly sets up a makeshift fashion business at home, but the sinful secrets of some townspeople drive them to ruin her business and reputation.

Absurd, quirky and dark describe this adaptation of Rosalie Ham’s book. Tilly’s first line sets the mood, and it’s a psychologically jostling ride from there on out. Each scene has a weirdness all its own. Just when you think you’ve returned to a normal universe, things go strangely awry again. Revenge is a central theme. Many characters are deplorable; other, seemingly innocent ones turn into vicious killers. THE DRESSMAKER is an absurd, weird adaptation full of dark humor and unlikeable characters, with some disturbing violence and lewd, immoral content. MOVIEGUIDE® advises extreme caution for the unacceptable DRESSMAKER.

(PaPa, B, C, HoHo, O, L, VVV, SS, N, AA, DD, MM) Strong pagan worldview in a tale of revenge where characters don’t abide by any moral code and live according to their own desires, some moral and redemptive elements include a girl is punished for supposedly murdering someone, God and sin are mentioned briefly in one scene and a funeral takes place in a church, plus some homosexual references where one character is a secret cross dresser, and a woman is accused of being a lesbian, and an occult element where a woman truly thinks she’s cursed; six obscenities and profanities (including a couple “f” words), plus women are called offensive names; some very strong, strong and light violence includes a rape scene where a man gets his wife drunk and takes sexual advantage of her, a teacher slaps a girl in the face, an implied abusive husband, a drowned man is shown, two heads are smashed together, a man dies in a silo full of sorghum, women wash a dead body, a woman has a stroke and dies, a boy threatens to kill a girl and her mother, a boy tries vengefully to hurt a girl, a wife slashes her husband’s legs with a large knife and leaves him to bleed to death, a boy breaks his neck and dies, characters hit golf balls toward town buildings and cause some damage, a woman commits arson on her hometown and its citizens; strong but brief sexual content includes a man gets his wife drunk and takes sexual advantage of her, there are references to adultery, implied fornication between one couple, a policeman is secretly a transvestite, a woman is accused of being a lesbian; a man is shown only in his boxer shorts as he gets fitted for a suit, upper male nudity in several scenes; characters drink in several scenes, plus a couple scenes show drunk characters; several scenes show smoking and a woman makes hash brownies; and, strong miscellaneous immorality includes a father sends his daughter away for revenge, several scenes feature characters lying in order to condemn someone they don’t like, a woman is unjustly framed for murder.

In THE DRESSMAKER, a successful fashion designer returns to her miserable, small Australian hometown where she gets to the bottom of a forgotten murder mystery and exacts revenge for the trauma she suffered as a child. Based on the book by Rosalie Ham, THE DRESSMAKER is an absurdly weird adaptation full of dark humor, deplorable characters and vicious behavior, plus some disturbing violence and lewd, immoral content.

Tilly Dunnage returns to her miserable hometown, Dungatar, set in the dusty wilderness of the Australian Outback during the early 1950s. Dungatar resembles a western ghost town, only it’s filled with quirky, vile, depressed people, none of which Tilly can stand.

After a long absence practicing the fashion art of haute-couture in Europe, Tilly unexpectedly bursts through the door of the decrepit shack she once called home, awakening her sapless mother and scaring away the pet rat. Her mother, whom the town calls Mad Molly and whom Tilly simply refers to as Molly, is a shell of the woman Tilly remembers from her childhood. Immediately, Tilly gets to work putting the house back together and cleaning up her mother, who appears to not have had a bath in several years.

The relationship between the two is tense at best. Molly seems cold-hearted towards her daughter, who was exiled to Europe at the age of 10 after a tragic event that Tilly’s unable to remember. However, she has a faint idea. One evening out of the blue, she asks her mother if she murdered someone as a child, but Molly refuses to answer Tilly.

Meanwhile, Tilly’s presence intrigues the townspeople to varying degrees. There’s Farrat, the secretly cross-dressing police officer, who drools over the expensive fabrics Tilly has brought from Paris. The chemist, schoolteacher and attorney all treat Tilly with contempt. Then, there’s Teddy McSwiney, the blonde-haired, blue-eyed soccer star who has all the girls swooning. He fancies Tilly as soon as he catches sight of her in the glamorous wardrobe of a designer, but he soon finds out she’s not the swooning type.

For most of the movie, Tilly fends off Teddy’s advances, though she desperately wants to give in considering he’s the only sane person in the whole town. Her belief that she’s cursed and unable to share any sort of close relationship with anyone only inspires him to try to help her.

Tilly decides to use her talents for good and transform the outdated townsfolk to runway-worthy spectacles. Her efforts bring together an unlikely couple and revive some community spirit in the dead town. However, not everyone is appreciative. The sinful secrets of some townspeople drive them to ruin Tilly’s makeshift business and her reputation. As things come to a head, Tilly desperately tries to recall the reason for her exile. When she finds out, she executes a plan for revenge on the entire town.

Absurd, quirky and dark are all adjectives that accurately describe this adaptation of Rosalie Ham’s book THE DRESSMAKER. The first line of the movie sets the mood and it’s a psychologically jostling ride from there on out. Each scene contains a weirdness of its own. Just when you think you’ve returned to a normal universe, things go strangely awry again. On one hand there there is an arrogance about Tilly that’s a little off-putting, but it’s difficult not to have some sympathy for her, because anyone raised in Dungatar would end up as a prime candidate for a mental hospital. It might be appropriate to label this movie as the haute-couture winner of 2016. Perhaps the only way to make sense of it is to shrug it off as art for art’s sake. One thing is certain: it’s a movie not easily forgotten. So, hoorah for artful filmmaking and all that (some Oscar voters are sure to like this one).

Even so, however, there are plenty of reasons not to love THE DRESSMAKER. The characters themselves have numerous flaws. Some are relatively harmless while others can be described as vile. As the story nears its end, the innocent and morally sound characters allow their quest for revenge to turn into evil acts of violence, while the town’s lone policeman reveals his feminine side as a raging cross-dresser. Tilly finds out she’s an illegitimate child and her real father is a serial adulterer. Revenge is a central theme. In fact, apparently no one in Dungatar truly likes anyone else, except for some young couples, who fall in love. Offensive language is minimal, but drunken characters make an occasional appearance, as well as drugs (mainly in the form of hash brownies). Multiple characters are either murdered or fall dead in one way or another.

Ultimately, THE DRESSMAKER is a dark, vengeful, absurd mess, a weird adaptation full of dark humor, deplorable characters and vicious behavior. It also contains some disturbing violence and lewd, immoral content. Extreme caution is advised for this unacceptable journey to the Australian Outback 60 years ago.