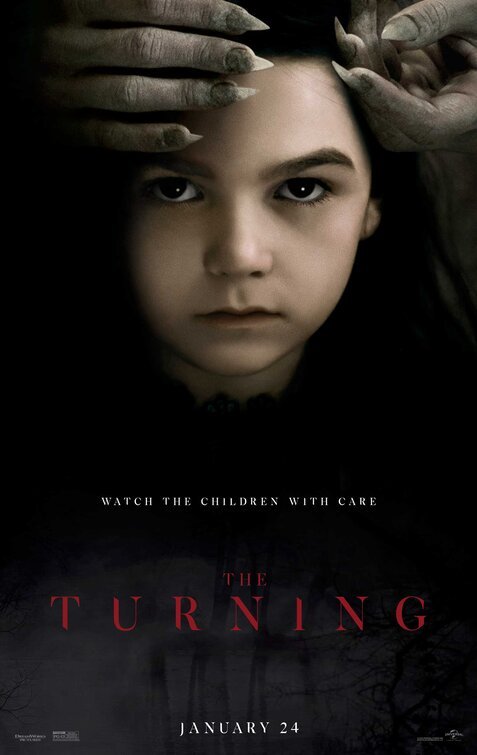 THE TURNING follows a new governess, Kate, as she begins working at an English mansion taking care of a little girl named Flora. She’s supposed to teach lessons to Flora, who’s never to leave the property. Because Flora is so cute and pleasant, this new job seems like a breeze. However, Kate begins to see things around the house, experiencing ghostly sightings, noises and nightmares. Can she escape this prison while still protecting Flora, or will she find a way to overcome this evil?

Based on a famous story by 19th Century writer Henry James, THE TURNING feels like the filmmakers decided to rewrite the ending and be done with it. The storyline was already weak. Little happens besides a few odd spirit sightings and jump scares. THE TURNING has an abrupt, unsatisfying ending. It suggests the nanny is seeing things, but the movie’s worldview is mainly occult, with evil spirits looking to harm people. Meanwhile, the characters possess no way to combat these things. With little entertainment value in the first place, media-wise viewers probably will turn away from THE TURNING.

(OOO, LL, VV, S, NN, AA, M):
Dominant Worldview and Other Worldview Content/Elements:
Occult worldview where there are spirits living in this house and speaking to the children who live there while attacking other people, none of the characters look to God to protect them from these evil spirits or seem to have any knowledge or belief on how to combat them, they just run from them and live in fear, the teenage boy talks to his “friend in the mirror” and asks for protection, but there is a suggestion that the nanny in the story is just imagining the ghosts
Foul Language:
11 obscenities, one strong profanity, six light profanities, and a teenage boy is shown from the back urinating
Violence:
Strong and light violence includes a boy is said to have choked his classmate, a bird eats a fish showing the bloody inside of it, a boy stomps on the injured fish so it won’t suffer, a woman has nightmares involving her head being smashed into a mirror, a ghost is shown having tears of blood, a woman hits her face causing a bloody nose, a woman sees a ghost man choking and killing the ghost of a woman, a spirit pushes an older woman down a stairway killing her, and a woman dives underwater to find a female corpse
Sex:
It’s revealed that a man used to take inappropriate pictures of women while they slept
Nudity:
Some nude paintings and statues in the background of some scenes, one image of a female’s rear in underwear with a large bruise, one scene involving a woman in her underwear and shirt, a woman is shown taking a bath although no private parts are shown,
Alcohol Use:
A man is said to have fallen off of his horse drunk and died, it’s implied that a young teenage boy would consume alcohol
Smoking and/or Drug Use and Abuse:
No smoking or drugs; and,
Miscellaneous Immorality:
A teenage boy is extremely disrespectful to his superior and ignores the rules because he was born into privilege and doesn’t have to adhere to them, and there’s an example of a bad role model as the grounds keeper of an estate is implied to have gotten drunk with a young teenage boy.

THE TURNING is another remake of a famous novella by Henry James about a governess of two children at an English country estate who encounters two ghosts who seem to be menacing the children.

The new movie begins as a young American woman named Kate decides to leave her job as a school teacher to become a live-in governess for a young girl on an English estate. Although she is sad to be leaving all the children that she has grown to love, as well as her roommate and friend, she feels that this will be a good decision for her. She packs up her things and makes one last stop before heading out. She soon arrives at a mental hospital, where she finds her mother sitting in a large empty pool painting canvases. Kate tries to have a conversation with her mother about what she’s doing and where she’s going, but the discussion doesn’t really go anywhere. As she says her final goodbyes, her mother hands her a portrait of Kate that Kate takes with her to her new home.

Upon arriving at the estate, Kate is overwhelmed with the enormity of it, struggling to find a living being anywhere. While exploring around the property, she finally finds the housekeeper, Mrs. Grose. She learns that Mrs. Grose has been with the family since the children’s father was a boy and also learns that both parents died in a tragic accident. Mrs. Grose tells Kate that she can find Flora in the horses stables. Kate meanders over there and finds Flora, a spunky little girl with a wild imagination. Flora knows random facts that she says her doll tells her, and she gives Kate the grand tour of the mansion, avoiding the east wing, where she said she never goes.

It seems like a pretty easy gig so far, and Kate gets reassurance from Flora who tells her that she likes her as Kate tucks her into bed. Flora tells her that her last governess left her and makes her promise that she won’t do the same. However, as Kate goes to shut the window in Flora’s bedroom, she sees a haunting face flash before her. This sparks Kate to feel on edge as she tries to sleep, hearing strange noises coming from the east wing of the house. Suddenly, she sees a young boy standing in the doorway behind her. Startled, she asks who he is. He’s Miles, Flora’s brother, who has returned home for a small break from boarding school. He tells her to go to sleep, but then apologizes the next morning for possibly being rude. They have clearly gotten off on the wrong foot, and it doesn’t seem to be getting any better.

Meanwhile, the strange sightings have gotten more and more frequent, and Kate feels like she needs to get out of there, but sticks to the promise that she made to Flora. The ghosts that haunt this enormous house may be telling her something about the past, or has she become as mad as her mother and imagining everything?

THE TURNING possesses possibly one of the most abrupt and inconclusive endings in all of filmmaking history. What there is of a story, mixed with some jump scares, is brought to a screeching halt, leaving viewers wondering what in the world happened. Like other versions of this story, THE TURNING tries to play on the ambiguity concerning whether the nanny is actually seeing real ghosts or is just imaging them. However, the abrupt ending is rather weak and makes a mess of that issue. Brooklynn Prince as the little girl is the only shining light in an otherwise huge disappointment. Also, there is absolutely nothing redeeming in THE TURNING, with no way to combat the alleged evil spirits, and not a glance at God for protection or guidance. The movie also contains some disturbing images, obscenities and profanities, but with little entertainment value in the first place, media-wise viewers probably will want to turn away from THE TURNING.