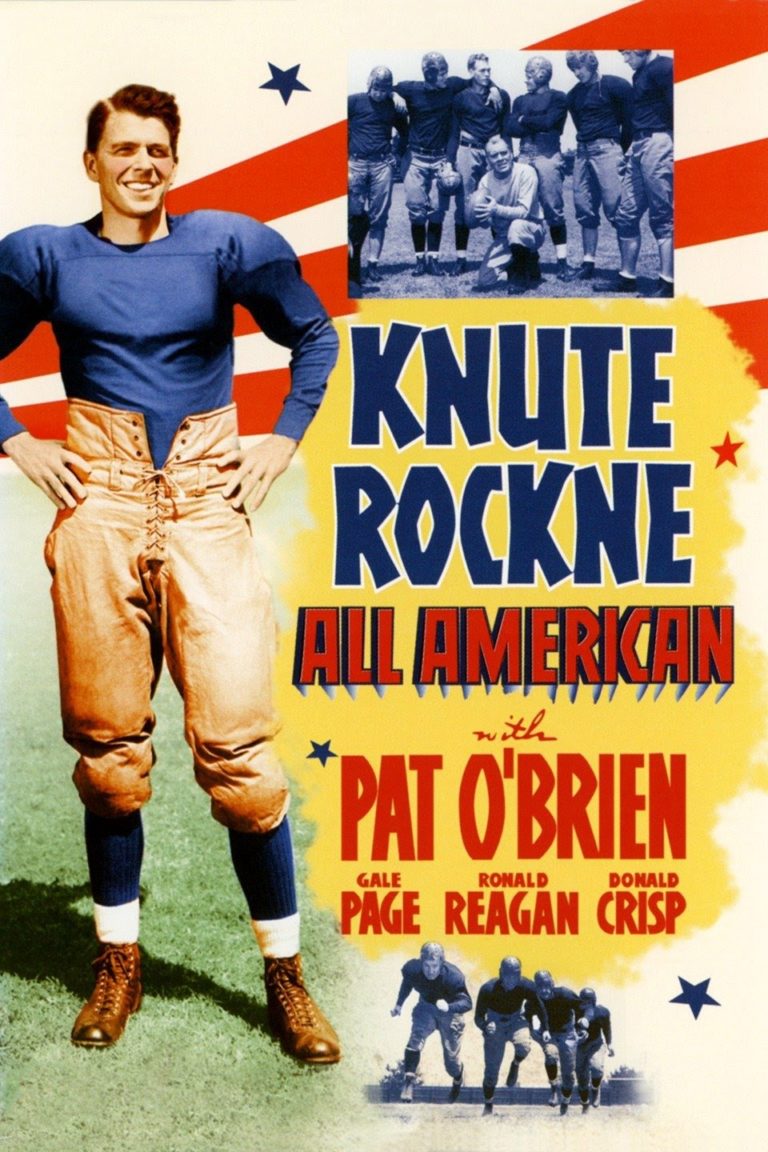 KNUTE ROCKNE ALL AMERICAN is a classic sports biography from 1940 about a man who follows his dreams to coach college football at Notre Dame in 1914 and becomes a legend. After graduating high school, Knute Rockne works six years so he can afford to attend college at Notre Dame. He also works hard to achieve his dream of coaching football even though his chemistry professor wants him to stick with science. Rockne loves his players and his family, which makes this classic movie more appealing.

KNUTE ROCKNE ALL AMERICAN is an engaging family movie with a great performance by Pat O’Brien. It has a strong Christian, moral worldview with strong Pro-American elements. The movie extols family, commitment, loyalty, teamwork, hard work, competition, and persistence. It contains little to no objectionable content, aside from some violent tackling during the football scenes. The only downside is that the story sometimes jumps ahead a few years without having a clear transition. A comment at the end in KNUTE ROCKNE ALL AMERICAN calls Rockne a “true son” of “Our Lady,” a reference to the Virgin Mary.

(CCC, BBB, PPP, FR, V, M):
Dominant Worldview and Other Worldview Content/Elements:
Very strong Christian, moral worldview with very strong Pro-American content and values, promotes the values of commitment, persistence, working together, loyalty, working hard, family, clean sportsmanship, tolerance of regional differences in America, improving the character of young men, and “right living,” with images of church, crosses, Jesus and His mother Mary, plus a somber church scene where a man is said to have been a “true son” of “Our Lady,” the Virgin Mary aka Notre Dame
Foul Language:
No foul language, but a man yells at his son in Norwegian, and there are no subtitles.
Violence:
Because the movie is about the sport of football, it does show some violent tackling, and a little boy’s nose starts to bleed after roughhousing in football with his friends.
Sex:
No sex
Nudity:
No nudity
Alcohol Use:
No alcohol use
Smoking and/or Drug Use and Abuse:
No smoking or drugs; and,
Miscellaneous Immorality:
A family is waiting for their son to return home from supposedly going to the store, and the boy sneaks in late after prayer has already started, and young men see a show where chorus girls are dancing.

With college football in doubt this fall because of the Chinese Communist Coronavirus, it’s really nice to revisit a classic movie about how college football molds the character of young men and brings Americans together. KNUTE ROCKNE ALL AMERICAN is a 1940 biographical movie about Knute Rockne, who was born in Norway in 1888 but immigrated to the United States at 5-years-old and later became a legendary football coach.

Knute becomes very interested in football shortly after he moved to the United States. One day he sees children playing football and wants to join them. Knute immediately develops a love of football, and his passion continues for the rest of his life.

Viewers learn that, when Knute graduated high school, he didn’t have the funds to attend college. Because of this, Knute worked six years until he saved enough money. In 1910, when Knute was 22-years-old, he enrolls in school at Notre Dame. Despite his love for football, Knute decides to study chemistry and play football on the side.

When Knute graduates from college, he takes a job as a chemistry professor at Notre Dame, but he also coaches football to earn some extra cash. After three years of trying to juggle both jobs, Knute realizes he has to choose between the two. Knute chooses to pursue his dream of coaching football full time. By this time, Knute is a father, and so he needs to balance more time with his wife, Bonnie, and young son, Billy.

KNUTE ROCKNE ALL AMERICAN places a strong emphasis on the importance of family. Although Knute originally puts his career before his family, he eventually realizes how important it is to spend time with them. Knute also displays worthwhile characteristics like loyalty and commitment to his friends. Also, Knute instills many good values into his students and players, including teamwork and cooperation. Knute also tells the students that they need to work hard in their classes because they didn’t just come to Notre Dame to play football. They came to study.

Knute not only instructs and trains his players. He also generally cares about them. His concern is evident in one of his students, George Gipp, played by Ronald Reagan. George is reluctant at first because he’s very lazy, but Knute sees potential in George and pushes him to become the most valuable player. Later, Knute realizes that George is very sick, although George keeps denying it, and, out of love and concern, Knute takes George to the hospital.

KNUTE ROCKNE ALL AMERICAN is a family friendly movie with many positive messages of family, commitment, following your dreams, working hard, teamwork, clean sportsmanship, and, as the narrator describes Knute Rockne’s teaching at the end, “right living.” At one point, the priest heading Notre Dame praises Rockne’s work with molding young men, saying, “You’re helping mankind, Knute, and anyone who helps mankind helps God.” The movie contains no objectionable content aside from some violent tackling during football scenes. The movie’s only downside is that the pacing is sometimes confusing. For example, the story sometimes abruptly jumps ahead a few years without having a clear transition. That said, Pat O’Brien’s gives a wonderful performance in the title role. He does a great impersonation of Rockne’s pep talks and way of speaking, without sounding too artificial. Also, Ronald Reagan shines in the movie as George Gipp, one of his most famous and most iconic roles. Kudos should also go to Donald Crisp as the priest who leads Notre Dame, and to Gale Page, who delivers a very appealing performance as Rockne’s supportive wife, Bonnie.

Ultimately, KNUTE ROCKNE ALL AMERICAN has a strong Christian, moral worldview with very strong Pro-American elements. During the movie’s climax, Knute Rockne appears at an important Congressional hearing and makes a strong appeal for the contribution college football makes in building the character of young American men and in bringing men from different parts of the country together. In these modern times when so many young people are attacking America and so many professional athletes are thumbing their noses at the American flag, Rockne’s speech to the Congressional committee is totally refreshing and absolutely inspiring. A comment at the end mentions that Knute Rockne was a “true son” of “Our Lady,” a reference to the Virgin Mary and the college’s name, Notre Dame.