"Sobering Look at a Comic Legend" 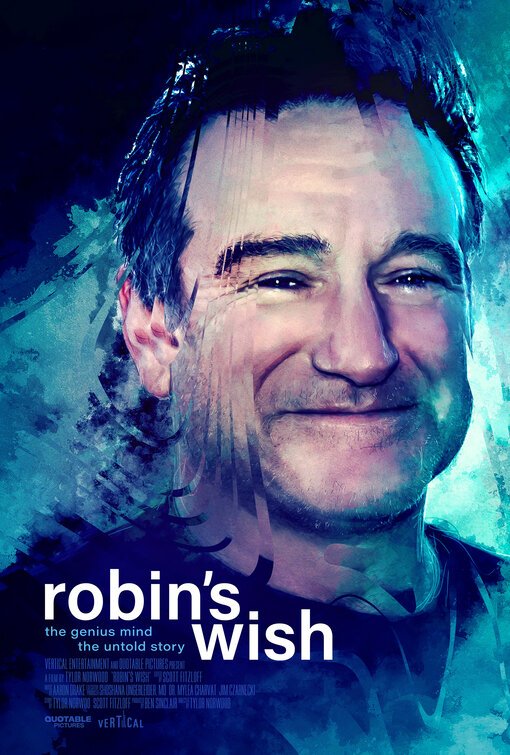 ROBIN’S WISH is an insightful documentary into the last years of comic legend Robin William’s life. In the movie, Williams’s doctors, family and life-long friends share sweet sentiments about the late comedian. The archival footage will be especially fun for fans as they show him making people laugh hysterically. Viewers get an inside look into why Williams chose to take his life, and the startling medical battle he underwent without knowing his true diagnosis.

Available through Video by Demand, ROBIN’S WISH is compelling. Robin’s doctors, family and lifelong friends share sentiments about the late comedian. The movie has a strong moral worldview. Robin’s widow and doctors contend his death was a result of brain disease. They want to help educate others about the illness and its consequences. There are also some Christian elements. For instance, Williams mentions the Sermon on the Mount in some archival footage and asserts that life is all about following God. However, the movie contains references to suicide and substance abuse, a reference to hypnosis, and images of a few decorative Buddhist statues. So, MOVIEGUIDE® advises caution for older children.

(BB, CC, PP, FR, Pa, Ab, H, L, V, AA, DD, M):
Dominant Worldview and Other Worldview Content/Elements:
Strong moral worldview where Robin Williams’s widow and his doctors communicate that his death was a result of his Lewy Body Dementia and try to help educate other people about its consequences, references to sharing hope and laughter with other people, some Christian elements when Williams references the Sermon on the Mount in some archival footage and ends the documentary with the assertion that life is all about following God, some strong patriotic content describing Williams’ support for the American military and overseas troops in particular, plus images of a few decorative Buddha statues, and an Anti-Christian moment where Robin Williams references atheism in a stand-up routine
Foul Language:
No obscenities and two light profanities
Violence:
References of Robin Williams taking his own life by hanging
Sex:
No sex but a married couple kisses a few times
Nudity:
Upper male nudity in a couple of scenes, woman’s midriff shown in archival footage from the 1970s
Alcohol Use:
Mention of alcohol abuse, but characters seek help for their addictions, and man picks up a glass of alcohol and takes a quick drink during a standup routine
Smoking and/or Drug Use and Abuse:
No smoking but there’s mention of drug abuse; and,
Miscellaneous Immorality:
Brief references to using hypnosis.

Available through Video on Demand, ROBIN’S WISH is a sobering, insightful documentary on demand into the last years of comic legend Robin William’s life, revealing new information about the brain disease that led to his suicide. ROBIN’S WISH has a strong moral worldview promoting public awareness of a brain disease that can lead to dementia, hallucinations and suicide, and promoting sharing hope and laughter with others, mixed with some references to suicide, substance abuse and images of a few decorative Buddha statues.

Robin Williams was a comedic legend whose life ended on August 11, 2014. At the time of his death by suicide, media outlets speculated that the GOOD WILL HUNTING Oscar-winner was depressed or had other mental health troubles that contributed to him taking his own life. However, ROBIN’S WISH and Williams’ wife, Susan Schneider Williams, say all of the above are false.

Williams suffered from Diffuse Lewy Body Dementia which affects people cognitively, generates hallucinations and paranoia, and may cause depression. Sadly, there’s no cure for Lewy Body Dementia yet, and it’s always fatal. Many people with Lewy Body end up taking their own lives, but at the time, Williams’s friends and family knew something was wrong, but he wasn’t formally diagnosed with Lewy Body. It wasn’t until after his death that his loved ones had answers.

Behind the veil of his Hollywood persona, Robin Williams was a normal guy. He lived in a suburban beach town just north of San Francisco and was highly involved in the community comedy scene and with his neighbors. Before settling down to this quiet life, Williams attended Julliard in his early twenties with the hopes of becoming a serious actor but then got involved in improv comedy which catapulted him into a slew of major motion pictures.

Throughout his prolific career, Williams always looked to challenge himself creatively and switching up the genres of movies he starred in

Like many other comedians of his age, Williams struggled with substance abuse but after the death of his friend John Belushi (THE BLUES BROTHERS), Williams got his act together and was a frequent supporter of the 12-step program. In his later years, he met his now-widow, Susan Schneider, while outside an Apple store. Since his death, Schneider Williams has been active in sharing and lobbying about Lewy Body Dementia so that others don’t have to go through the same pain and physical deterioration that Williams did.

ROBIN’S WISH is sober but compelling as Williams’s doctors, family and lifelong friends share sweet sentiments about the late comedian. The archival footage will be especially fun for fans of Williams as they show him work for decades in comedy and in the entertainment industry at large.

ROBIN’S WISH has a strong moral worldview overview. Williams’s widow and his doctors communicate that his death was a result of his Lewy Body Dementia and try to help educate others about its consequences. There are also some Christian elements in the documentary. For instance, Williams references the Sermon on the Mount in some archival footage and ends the documentary with the assertion that life is all about following God. He also stresses that fear shouldn’t cripple people. Williams and Dr. Ted Baehr talked extensively about faith, and Williams would always try to go to Tim Keller’s Redeemer Presbyterian Church when he was in New York City. However, the movie contains references to suicide and substance abuse, a reference to hypnosis and images of a few decorative Buddha statues. So, MOVIEGUIDE® advises caution for older children.