"Too Foul and Politically Correct" 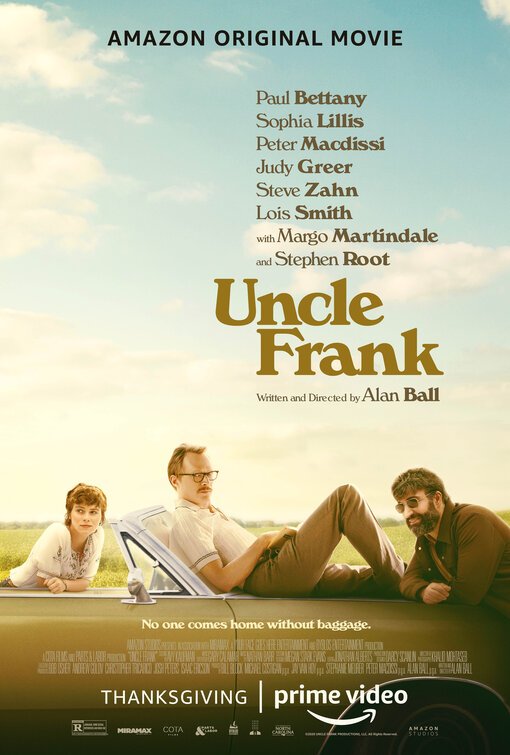 UNCLE FRANK is a drama streaming on Amazon Prime. Set in 1973, it explores the story of a young woman and her uncle, a college professor at NYU in New York City. Uncle Frank left his southern roots to pursue a career as a professor, where Beth now attends. At college, Beth discovers Frank is in a serious homosexual relationship with a Muslim man. Frank and Beth must return home to attend his father’s funeral. A recovering alcoholic, Frank fears his conservative family will discover his secret homosexual life. Also, Frank is haunted by a traumatic teenage incident. These fears cause Frank to fall off the wagon.

UNCLE FRANK is well acted and produced, but heavy handed in its politically correct messages. It has a light redemptive element of forgiveness that’s rather nuanced. However, its strong Romantic worldview has a strong abhorrent, politically correct, pro homosexual worldview that misrepresents Christianity. UNCLE FRANK also has lots of strong foul language, alcohol abuse, references to a past suicide, examples of sexual immorality, and references to the Muslim faith of the title character’s same-sex partner.

(RoRoRo, PCPCPC, HoHoHo, AbAb, C, FRFR, LLL, V, SS, NN, AA, DD, MM):
Dominant Worldview and Other Worldview Content/Elements:
Very strong Romantic, politically correct, pro-homosexual worldview, as well as some misrepresentation of God and the Bible where there is Scripture reading and Christian prayer at a funeral, but this Christian content is connected to the title character’s trauma because his Christian father harshly condemned hm not to hope (the Bible and people of biblical faith are falsely attacked for their anti-homosexual morality and for supporting slavery, which isn’t true), plus some light moral, redemptive, Christian elements include a theme of forgiveness, and a mother displays love for her adult son when he reveals to her that he’s homosexual, and she mentions God to him as well as the aforementioned Christian prayer, and movie has strong false religious elements, which includes an antinomian or lawless attitude toward homosexual evil and an Islamic prayer and Islamic religious elements as a homosexual man still maintains his Muslim faith
Foul Language:
About 38 obscenities (including 21 “f” words), 12 GD profanities, four uses of vulgar slang for homosexuals, some disparaging comments about Jews and blacks, and other crude joking
Violence:
Two men get into a fight, one man is punched in the face, some blood shown, and a teenage boy commits suicide in a flashback, and an image of his body floating in a lake is shown
Sex:
Strong sexual content includes a college freshman boy makes aggressive sexual advances toward an older professor at a party, but the professor refuses, there is no nudity, but there are implied sex scenes, college boy and girl shown in bed trying to have sex, two teen boys are shown kissing several times, two men have sex and nothing is shown, but it is heard, lesbians are shown in bed together at a party, and some coarse talk about oral sex
Nudity:
Upper male nudity both in non-sexual and sexual contexts Alcohol Use/Abuse: Character is a recovering alcoholic but falls back into heavy drinking, the character is shown drinking or drunk throughout the movie, a college freshman girl in 1973 (before state alcohol laws were changed to over 21) gets drunk at a party, same girl throws up in the bathroom toilet and then is hungover the next day, other brief instances of wine and beer drinking
Smoking and/or Drug Use and Abuse:
Cigarette smoking and marijuana smoking at a party; and,
Miscellaneous Immorality:
Lying.

UNCLE FRANK is a new Amazon original movie set in 1973 about a college age woman’s close friendship with her uncle, who’s been hiding his homosexual behavior from their family.

The movie opens in 1969 with a Bledsoe family gathering celebrating “Daddy Mac’s” birthday. Daddy Mac is Uncle Frank’s father and Frank’s 14-year-old niece, Beth’s, grandfather. At the party, Uncle Frank and Beth seem out of place, but they find solace in talking to one another. Narration by Beth shares a special moment where Uncle Frank changes her life by telling her to be who she wants to be and not what her family tells her she should be.

Frank lives in New York City, and Beth is fascinated by this foreign world that Uncle Frank depicts when he talks to her. However, Beth can’t figure out why “Daddy Mac” hates his son. Even so, Beth decides Frank is who she wants to be like when she grows up: educated, well-mannered and funny.

Four years after her conversation with Frank, Beth enrolls in New York University in Manhattan, where Uncle Frank teaches. She followed her uncle’s advice and left South Carolina for something bigger.

Beth is enjoying college when she meets a boy. The boy seems to be infatuated with her Uncle Frank, and the two attend a party. However, Beth’s initial inclination to call the boy her boyfriend goes awry. In the aftermath of the party that Frank threw, she learns that her boyfriend tried to seduce Frank, who’s been hiding his homosexual lifestyle from his family for more than 10 years.

Beth is stunned by this news. However, she doesn’t have time to process it, because Frank gets a call from his mother the very next morning informing him that “Daddy Mac” has died. Frank wants to skip the funeral, but his homosexual partner, a Muslim man named Walid, convinces him to support his mother.

Walid, otherwise known as Wally, wants to tag along, but Frank fears for what his family will think and how they will treat him if his secret gets out. As Beth and Uncle Frank pile in the car to begin the long drive south, Uncle Frank’s past life of trauma, closely connected to his now-dead father, comes back to him. Uncle Frank was always seen as different, but it’s his worst nightmare for the rest of the family to know just how different he is.

UNCLE FRANK is well acted and well produced, but heavy handed in its politically correct messages. The movie contains a light redemptive element of forgiveness and makes an effort to bring some nuance to the issue. However, the movie’s Romantic worldview, politically correct agenda, pro-homosexual content, and misrepresentation of Christianity take center stage. The movie flirts with a question many Christian families are familiar with today. How do you obey God’s Word Written condemning homosexual sin but still show Christ’s love to people enslaved by such sin? Sadly, the filmmakers ultimately side with today’s radical LGBT activists who simply do away with God’s biblical condemnation of homosexual evil. This is a big part of the movie’s Romantic, lawless, immoral worldview. UNCLE FRANK also contains many “f” words and many GD profanities. In addition, it has scenes of alcohol abuse, marijuana smoking, strong sexual content, and the title character’s Muslim boyfriend following his Muslim faith. See the accompanying CONTENT section for more details.