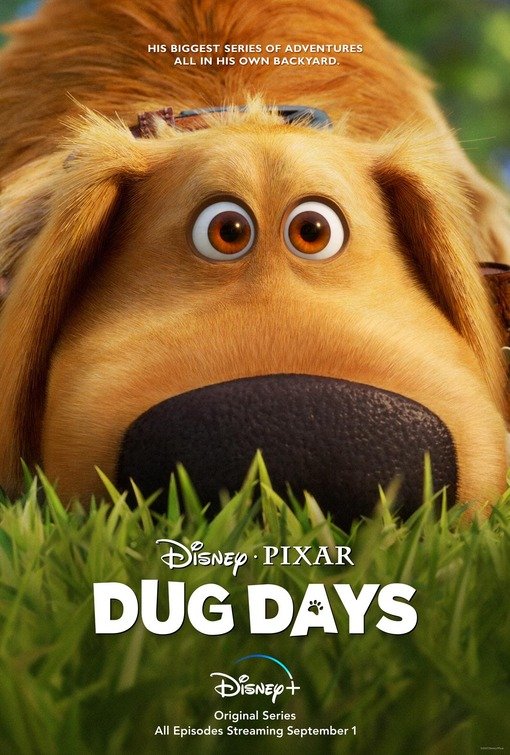 DUG DAYS is an animated comedy series on Disney+ about Pixar’s beloved dog, Dug. Now under the care of Carl, Dug has new life experiences as he learns to be a pet rather than part of a pack. He tries his best to behave but finds it to be a struggle to be good. He babysits puppies and even helps get a neighborhood fire extinguished. His daily adventures have him experience fireworks for the first time and even learn that being a pet is a privilege compared to other animals, but also involves hard work.

Season One of DUG DAYS is delightful, funny, heartfelt, and meaningful. The scripts are well-written, and the camera work and animation are impeccable. Even better, almost every episode has some positive lesson to learn. For example, DUG DAYS teaches helping others, learning to share with others, helping your neighbors, and being what God wants us to be. MOVIEGUIDE® advises caution for younger children for some light violence, scatological humor and bad behavior in DUG DAYS. The negative content often sets up the lessons.

(BBB, C, O, V, M):
Dominant Worldview and Other Worldview Content/Elements:
Very strong moral worldview with Christian implications shows how to treat other people (including parents, neighbors, and even being nice to your enemy), learning to be unselfish, and looking into the deeper meaning of why God put us on this Earth, and how the answer(s) to that can be more than what meets the eye, plus a witch is depicted on a weather vane on a scary old house with broken windows in the show’s comical intro as characters look for a new house to live (the scary house is clearly rejected)
Foul Language:
No obscenities or profanities, but there is some scatological humor such as a boy urinating on fire hydrant, dog urinating on fire hydrant, depictions of a toilet plunger and a dirty diaper, and dog says he wishes a squirrel was dead about six times in Season One
Violence:
Light cartoon violence includes depictions of dog and squirrel chasing each other and throwing things at each other (also, for example, the dog is hit on the head by a nut that falls from the squirrel’s tree home and runs through a bed of flowers, messing them up), puppies bite older dog’s ears, puppies rip dog toys apart, plus one depiction of a squirrel implying it wants to die after it accidentally loses all its stash of food, one scene depicts five dead squirrels, also depicted are one dead snail and some fish bones
Sex:
No sexual content
Nudity:
No nudity
Alcohol Use:
No alcohol use
Smoking and/or Drug Use and Abuse:
No smoking or drugs;
Miscellaneous Immorality:
Dog disobeys owner in nearly every episode, a few moments show the dog not wanting to share, mild depictions of stealing include dog stealing a hot dog and animals trying to steal a sandwich, and some scenes where characters make fun of other character(s).

OVERVIEW REVIEW: Pixar’s DUG DAYS is a fun, comical TV program on Disney+ about the beloved duo Carl and Dug, the dog from Pixar’s popular UP movie. This brief series takes viewers into Carl and Dug’s life together after the events in UP. The five 11-minute episodes are sure to keep the entire family laughing.

In episode one of DUG DAYS, Dug finds it hard to be obedient. Even trying to be obedient to his owner, Carl, is a difficult task. Carl tells Dug to watch the bird feeder he made, while he takes a nap after building it. Dug takes his job serious and even scares a bird away on accident. He then sees a “Squirrel!” The mischievous Squirrel tries to steal the bird feed, but Dug tries to stop him. This causes destruction of the backyard and the Squirrel’s stash of acorns to fall down a water drain. Dug tries to help the Squirrel, even though it’s his enemy, by giving him Carl’s favorite peanut butter.

In episode two, Dug babysits puppies for the first time. He quickly learns how energetic and rough puppies can be when all they want to do it play and bite him. Even when the puppies eat his food, Dug tries to see the bright side. When the puppies finally settle down for a nap, Dug accidentally steps on his squeaky dog toy, causing the puppies to wake up. The puppies rush to get all of Dug’s toys and rip them to shreds, but Dug is able to save one toy. Dug then builds a barricade between him and the puppies to stop them from taking his last toy. When the Squirrel frightens the puppies, Dug takes down the barricade and shows the puppies not to be afraid of the Squirrel. Dug then teaches the puppies to do things he knows how to do until his job of babysitting them is over.

Episode three starts with Dug sniffing things and knowing exactly what they are. However, when he sniffs a smell he’s not familiar with he finds it concerning and needs to see what it is. Dug then digs his way out of the backyard to find the smell. When Dug finds the smell, he sees that it is a shirt on fire by someone’s garbage can. He races home to tell Carl but loses his collar that helps him communicate. When Carl doesn’t understand, Dug drags him to the fire. At the end, Dug is awarded a medal for being a “Hero Dog.”

In episode four, Dug and Carl come back from a fair at Carl’s Alma Mater. They get home just in time for the fireworks, but Dug has never seen fireworks. Carl describes them as flowers in the sky, but Dug soon realizes they are nothing like flowers and just as every dog is, Dug is terrified of fireworks. He tries to protect Carl and himself by running everywhere, barking and causing chaos throughout the backyard and inside the house. No matter Carl’s efforts to calm down Dug, the canine is still scared and upset. Eventually, Dug falls asleep and has a dream about all of his favorite things, but it turns to a nightmare where flowers are attacking him, and Carl is yelling at him. Carl then wakes up Dug from this nightmare, and the fireworks are still going off. The final scene is Dug with a pair of headphones on with classical music playing while watching the fireworks with Carl.

In the fifth and final episode of Season One, Dug learns he is a pet when Carl is clipping his nails. Dug goes outside in the backyard to see Russell and notices him eating a peanut butter and jelly sandwich. During Dug’s efforts to get the sandwich from Russell, Dug sees the Squirrel and chases after him. Dug is shocked when he learns that the Squirrel can talk just like him and so can the Blue Jay. It is then shown how Russell made similar collars to Dug’s and how he tricked both animals into wearing them. Dug, the Squirrel and the Blue Jay bicker back and forth. When Russell has to leave, he gives Dug his sandwich, but Dug hears the other two animals saying they also want the sandwich. The other two animals mock Dug about being a pet, and how he’s given food when they have to hunt for theirs. However, Dug tells the animals something they did not know which is that at one point Dug also had to hunt for his food when his pack would abandon him. With this terrible memory, Dug gives the sandwich to Squirrel and Blue Jay to split. Before the animals leave with their half, Russell releases the collar from both. Dug learns from Carl what his responsibilities have been as a pet and as Carl’s best friend.

DUG DAYS is exactly what one would expect from a spinoff of one of Pixar’s most beloved characters. It’s funny, heartfelt and meaningful at the same time. Even though this is a children’s show, it is truly great for all ages. The scripts are well-written, and the camera work and animation are impeccable, as one would expect from the animation leaders at Pixar. However, there may be some confusion in the final episode as to why Russell and Carl seem to “test” Dug when he’s giving the sandwich to the other two animals. However, the ending makes up for the confusion felt one minute prior.

Viewers have a lot to unpack when watching DUG DAYS. The moral lessons there can be seen in a Christian point of view. Almost every episode has some lesson to learn. The first being to obey “your owner” and help others when you cause them hurt. Another lesson shows how selfish we can be about sharing. Learning to share with others and help them when they need help can overcome our selfish ways. A third lesson is to help your neighbors when and if you can. A fourth lesson teaches children about learning what we are and what God has put us on this Earth to be. This lesson has a lot more meaning to it than meets the eye. MOVIEGUIDE® advises caution for younger children for some light violence, scatological humor and miscellaneous immoral behavior in Season One of DUG DAYS. The negative content, however, often sets up the lessons.