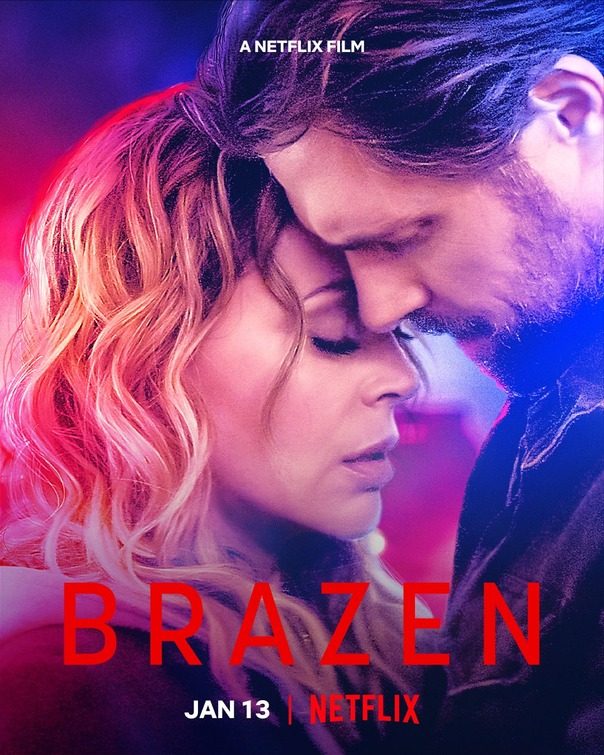 BRAZEN is a mystery thriller streaming on Netflix. The story begins when Grace, a crime novelist, pays a much-needed visit to her sister, Kathleen, who’s going through a divorce and fighting for custody of her son. However, shortly after Grace’s arrival, Kathleen is found murdered. Grace soon learns of a secret life that Kathleen was living as a webcam performer, soliciting clients who have a desire for sadomasochism style videos. Grace convinces the local police to let her use her expertise to help them track down the killer, who begins a killing spree. Eventually, she puts her own life in danger.

BRAZEN is poorly written, with barely serviceable acting. Since the story revolves around the murder of sex workers, things can get a bit racy. Although the victims’ secret life is embarrassing to their families, their lifestyle is presented as generally normal. Also, the heroine has an affair with the lead detective. BRAZEN also has some violent scenes, but no extreme violence, blood or gore. However, the good eventually prevails and justice is served. So, MOVIEGUIDE® advises extreme caution for BRAZEN.

(PaPa, B, HH, Ho, L, VV, SS, N, A, M):
Dominant Worldview and Other Worldview Content/Elements:
Mixed pagan worldview with light moral elements due to the fact that the good does prevail and justice is served, but the justice and moral compass is determined by man and man alone, the killer positions his victims like they are on a cross but any reasoning or motive behind that is never explained, there’s some moral relativism regarding the acts and occupations of sex workers, plus some light homosexual elements when it’s revealed that two teenage boys are romantically involved
Foul Language:
One “s” obscenity and several profanities, including one profanity using the name of Christ
Violence:
Strong violence with some physical, hand to hand combat, as well as one altercation using a knife, and one using a gun, a man is punched showing a light amount of blood, women’s bodies are shown after they’ve been killed although no blood is shown, some crime scene images
Sex:
Sexual elements throughout although nothing extremely explicit is shown, there are brief images of the sex workers videos, but no actual sexual act is shown, it’s mostly just people in masks and their underwear; plus one example of implied fornication
Nudity:
Upper male nudity a few times, only once when kissing a woman, woman shown in bra/panties a few times but very brief
Alcohol Use:
Some alcohol use at dinner or having a glass of wine
Smoking and/or Drug Use and Abuse:
No smoking or drugs, but woman mentions she was previously addicted to pills and is on medication now;
Miscellaneous Immorality:
Some miscellaneous immorality includes a woman reveals her plan to blackmail her ex-husband who is involved in some sort of fraud, plus some teenage rebellion occurs.

Streaming on Netflix, BRAZEN follows murder mystery novelist Grace Miller as she arrives to visit her sister Kathleen, who needs some love and comfort. Kathleen left her husband and son after she stumbled onto some personal hardships and is now filing for divorce and fighting for custody of her son. She’s become an English and Drama teacher at the local high school but is working to gather information on her ex-husband to try and sway him towards allowing her to take their son.

When Grace arrives, she quickly meets and hits it off with Kathleen’s neighbor, Ed, who is a detective for the local law enforcement and has recently solved a murder case. However, it’s during their date that Kathleen is brutally murdered in her home, allowing Grace to come back and find her dead.

Since she’s researched the minds of killers for her novels, Grace is allowed full clearance to team up with Ed and his partner Ben to try and track down the killer. However, shortly after Kathleen’s murder, they learn she was living a secret life behind a locked door. She has been soliciting clients on a website called “Fantasy Inc.” and making webcam videos as a dominatrix under the pseudonym Desiree. Not long after she’s killed, another sex worker on the same website is murdered and left in the same position that she was, with the killer calling the new victim “Desiree” also. However, it’s the third attempt that leaves a survivor and allows the police to gain traction on the case.

Grace soon has the idea to put herself in the shoes of her sister as bait to catch the serial killer.

Adapted from a novel by the prolific, popular writer Nora Roberts, this Netflix film feels akin to a melodramatic Lifetime movie, with an ominous piano playing underneath every scene. The writing is poorly done, and the actors don’t do much to help it out. When Kathleen is murdered, her sister Grace, played by Alyssa Milano, hardly sheds a tear and her attempt at emotions feel forced. The chemistry between the love interests is practically nonexistent and hardly flows with the storyline at all. Ed’s partner, Ben, is the most interesting character although his role isn’t a principal, even though viewers may wish he was. Also, even though BRAZEN clocks in at 94 minutes, it feels much longer.

The morality in BRAZEN is also questionable, with the storyline centering around sex workers who are being killed. Since they are the victims, the actual act of the sex work is rarely acknowledged, other than some embarrassment to the family. It follows a primarily pagan and humanist worldview with man being the sole judge of right and wrong, although there are some strong moral elements because justice does prevail. The sexual references occur throughout the movie, but the images shown are mostly mild, with no explicit nudity. MOVIEGUIDE® advises extreme caution for BRAZEN.

MORE DESCRIPTION: Women are strangled and killed. They suffer in the process, though one woman survives and stabs her attacker, and another survives after a struggle. A man is shot and killed. There’s a holdup at gunpoint in a convenience store and a fight ensues. A woman punches a man; two teenagers fight and one ends up in the ER. A woman reads a graphic description of a dead woman lying in blood. There’s mention of serial killers and rapists. Women’s dead bodies are photographed by police.