"Suppressing the Beast Within" 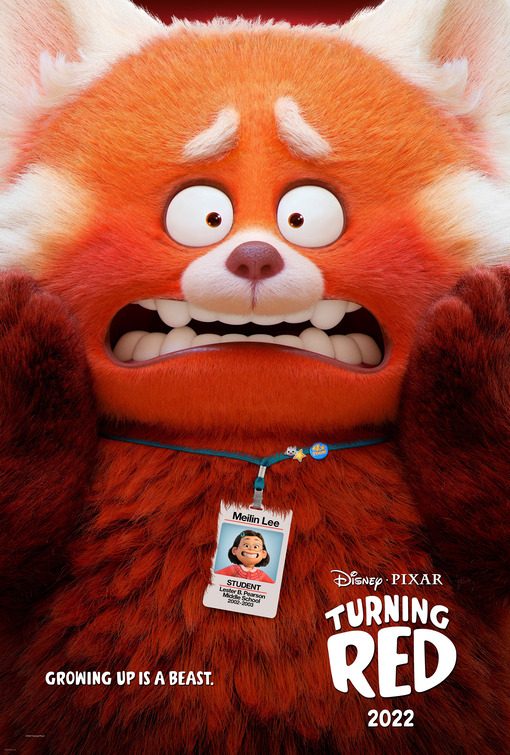 TURNING RED is an animated Pixar comedy on Disney+. Set in 2002, the story is about Mei, a precocious, independent 13-year-old girl living in Toronto, Canada. Mei chafes under the watchful eye of her strict Chinese mother. Mei asks her mother if she can attend a popular boy band’s concert in Toronto with her four friends, but her mother says no. The next morning, Mei magically transforms into a large red panda, a curse that runs in her mother’s family. Mei decides to use the red panda to secretly earn the money to go to the concert, against her mother’s wishes.

TURNING RED has a lively, fun plot and colorful animation. It also has a big finish, strong characters and some pro-family themes. However, the movie is marred by false theology, including references to ancestor worship, Zen Buddhism, magical transformations, and polytheism. Despite the conflict between Mei and her mother, the resolution of that conflict isn’t a rejection of family but ultimately an affirmation of the family ties that bind families together. Nevertheless, MOVIEGUIDE advises extreme caution for the false theology in TURNING RED.

(PaPa, BB, FRFR, O, L, V, M):
Dominant Worldview and Other Worldview Content/Elements:
Strong mixed pagan worldview with strong moral, pro-family elements (including eventually reconciliation between mother and daughter and between the grandmother and the mother, and taming the beats within), combined with references to ancestor worship, Zen Buddhism and “the gods,” plus references to an occult ritual designed to stop women from mystically, magically transforming into giant red pandas
Foul Language:
One light OMG profanity and two uses of “butt”
Violence:
Light action violence includes 13-year-old girl transforms into a large red panda when she gets excited or angry and her panda knocks things over, her large panda does other damage, teenage girl gets angry and lashes out at teenage boy, and the girl’s red panda has a tussle with her mother’s giant red panda, which wrecks a concert stage
Sex:
No sexual immorality, but teenage girls have crushes on boys and a boy band
Nudity:
No nudity
Alcohol Use:
No alcohol use
Smoking and/or Drug Use and Abuse:
No smoking or drugs; and,
Miscellaneous Immorality:
Teenage girl disobeys and defies her mother, who’s a bit strict.

Set in 2002, TURNING RED is an animated Pixar comedy on Disney+ about a 13-year-old girl in Toronto, Canada who magically transforms into a giant red panda and causes some mischief in her Chinese family and her school, much to the chagrin of her stern mother. TURNING RED has a lively, fun plot and colorful animation, with a big finish, strong characters and some pro-family themes, but the movie is marred by false theology, including references to ancestor worship, Zen Buddhism, magical transformations, and polytheism.

Narrated off and on by the young heroine, the movie begins with 13-year-old Meilin (“My-lin”) saying how happy she is about the coming school year. Mei also celebrates her independence and mentions her four friends. Mei and her friends are big fans of the newest boy band, 4*Town. At the end of the first day of the school year, Mei’s friends invite her to come with them to a listening party, but Mei declines, saying she must go home and do some work for her mother.

The work turns out to be sweeping and getting ready for people to visit the family’s little temple. The temple turns out to hold an altar to her mother’s ancestors, especially its grand matriarch who loved red pandas. Mei explains to viewers that her family doesn’t worship any gods but worships their ancestors.

Mei and her friends are huge fans of the new boy band 4*Town. They learn that the band’s tour will play in Toronto soon. Mei asks her mother if she can go to the concert, but Mei’s mother is totally opposed to boy bands and Mei going out anywhere with her friends. Mei stalks angrily away to her room.

The next morning, Mei has turned into a large red panda. Her mother calls her to breakfast. Mei panics and tries to hide, but she keeps knocking things over in her room. Her mother bursts into the room and calms her down. She explains to Mei that changing into a large red panda runs in their family among the women. She says the red panda appears whenever the girls have a strong emotion, especially anger. The mother explains that the original ancestor asked the gods to change her into a large red panda to protect her family and village during wartime. The only way to get rid of the “curse” is for the oldest male in the family, Mei’s grandfather, to perform a ritual on the next red moon.

At school, Mei tries to hide her red panda, but her friends find out about it. Then, Mei has a bright idea. They can charge their classmates to see the red panda. The money they get from that will help pay Mei’s way to the boy band’s concert, against her mother’s wishes. Soon, Mei has a thriving red panda business. She and her friends even make red panda hats and T-shirts to sell.

Things don’t go quite as they planned, however. Mei must overcome some big, comical obstacles, not the least of which is her nosy, overprotective mother. Will Mei be able to attend the concert? Will Mei be able to banish the red panda from her life?

TURNING RED has a lively, fun plot and colorful animation. Also, the characters are well drawn, both psychologically and visually. That said, Disney clearly pulled this Pixar movie from theatrical release because it doesn’t quite meet the standards of Pixar’s best efforts, such as the TOY STORY movies, FINDING NEMO, UP, and THE INCREDIBLES. However, it’s a solid piece of entertainment that flows smoothly and leads to a somewhat spectacular ending. So, it could have had a perfectly respectable theatrical showing at the box office. Disney will never know.

Thematically and dramatically, the movie’s strongest parts are the relationships between Mei and her mother and Mei and her friends. Ultimately, TURNING RED is a celebration of female empowerment, but not in a radical feminist way that’s annoying. As such, it’s an engaging coming-of-age comedy where the heroine, Mei, learns to function as an independent person, strengthen her bonds with her close female friends and reconciles with her strict mother. Despite the conflict between Mei and her mother, the resolution of that conflict isn’t a rejection of family but, ultimately, an affirmation of the family ties that bind mother and daughter and bind parents and children together. Also, the movie teaches its targeted audience, mostly teenage girls, to tame the beastly parts of them that lurk within their psyche. This can be a valuable lesson, even for boys, but it needs Christian, biblical reference points and application.

Within this complex dynamic, TURNING RED sadly includes references to Chinese ancestor worship. At one point, for example, in Mei’s narration, Mei says that her family doesn’t worship any gods, but they do worship their ancestors, especially the family’s grand matriarch. Also, at another point, Mei says that the family’s grand matriarch prayed to “the gods” during a time of war that the gods imbue her with the power of the red panda so she could defend her family. That’s when she received the ability to transform herself into a large red panda. Mei’s mother and grandmother have come to view this ability as a curse. So, the movie’s premise involves whether Mei herself will see the red panda power as a curse or a boon.

Ultimately, therefore, TURNING RED has a mixed worldview with pro-family elements and false religion. TURNING RED also has about two overt references to being Zen-like to help her remain cool and control the red panda withing her. These moments are references to the Buddhist sect of Zen Buddhism, where the practitioner seeks to clarify the mind, pacify the mind, unite mind and body, and realize the interconnectedness of all things. As with all major Buddhist sexts, Zen Buddhism’s ultimate goal is to recognize “impurities,” such as greed, anger and ignorance, letting them go, and achieving “enlightenment,” which involves a kind of emptiness, purity of desire and action, calmness of mind, perfect discernment of what is true and false and what is harmful and not harmful, and emotional “balance.” As the most recent of many Rimboches said in terms of another sect of Buddhism: “life is a cesspool, so let go.” As I responded to one of his disciples from Harvard, who came to Jesus Christ, “it is a fallen world, but Jesus is reaching out to you to pull you out of the cesspool so you will have a more abundant eternal life.”

Of course, Jesus Christ and His apostles in the New Testament teach that purity of desire and action and discernment of Truth and Goodness only comes through repentance, through faith and trust in Jesus Christ and His Gospel, through an ongoing personal relationship with Jesus, through reading and living according to God’s word, which is found in the Holy Bible, and by the power of the Holy Spirit.