WHOSE CHILDREN ARE THEY? 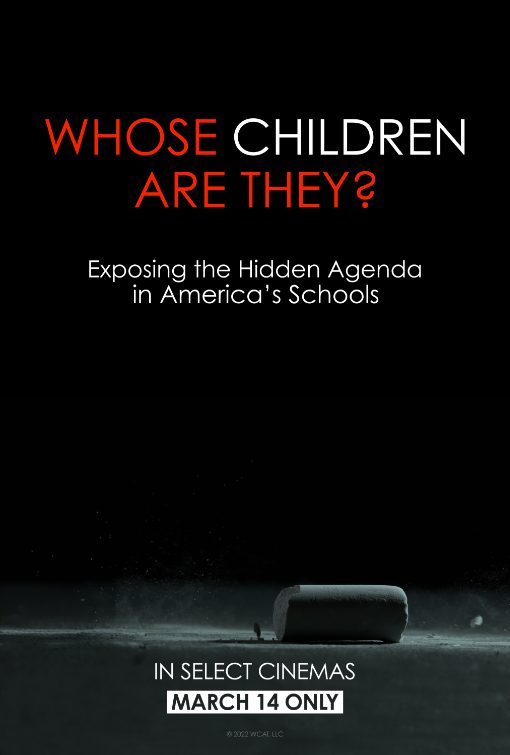 WHOSE CHILDREN ARE THEY? is an informative, convincing documentary about the major controversies in America’s public schools. The movie shows that public schools are no longer family-friendly places for children, who have become political pawns of teacher unions controlled by radical leftists. Divided into several sections, the movie contends that wealthy teacher unions, leftist school officials, radical teachers, and other leftist activists have infiltrated the public schools to promote a radical communist, socialist, sexually perverted agenda. Each section contains multiple interviews with parents, educational experts, teachers, students, and conservative activists who oppose this radical leftist agenda.

(BBB, PPP, ACACAC, L, V, S, NN, M):
Dominant Worldview and Other Worldview Content/Elements:
Very strong moral, Pro-American, anticommunist worldview about leftists and communists infiltrating the American public schools to indoctrinate schoolchildren in anti-Christian, anti-Semitic, anti-American, pro-homosexual, transgender, racist, immoral communist, and leftist identity politics
Foul Language:
Seven sexual obscenities used by leftist teachers in the public schools to pervert children are mentioned and there are three bleeped “f” words
Violence:
A few mentions of threats from leftist teacher union bullies and brief talk about teenage suicide epidemic and teenage girl cutting hers arms because of depression resulting from school lockdowns under the coronavirus hysteria
Sex:
verbal references to the promotion of oral sex, anal sex, self-abuse, homosexual perversion, and other sex acts by public school officials, big government, teacher union leaders, and leftist activists in “comprehensive” sex education curriculum and curriculum promoting a radical LGBT agenda, plus a cartoon image in one such curriculum shows a couple lying naked under the covers
Nudity:
A cartoon image of breasts in one scene, and one image shows a cartoon headboard and cartoon bedpost with cartoon depictions of breasts and male organs while a couple lies in bed under the covers
Alcohol Use:
No alcohol use or abuse
Smoking and/or Drug Use and Abuse:
No smoking or drugs; and,
Miscellaneous Immorality:
Discussion of various bullying tactics used by leftist activists, some of whom are running teacher unions, but rebuked, bullying tactics by teacher unions and school officials are mentioned and rebuked.

WHOSE CHILDREN ARE THEY? is an informative, convincing documentary encouraging parents and other Americans to oppose the leftist movement in American public schools trying to promote a radical, perverted communist agenda to indoctrinate children and destroy America’s cultural, religious, political, and social heritage. At 120 minutes, WHOSE CHILDREN ARE THEY? is a little too long, but it’s a spirited movie that will inspire concerned parents and other citizens to take back the education system and protect children from these radical leftists, though caution is advised for some adult references in a section on sex education.

The movie opens by showing that public schools are no longer family-friendly places for children, who have become political pawns of teacher unions controlled by radical leftists. “The teacher unions have gone from caring about children to a very different agenda,” says one educator. “Now it’s about power and money and politics, and somehow the kids are getting lost in all of this.” Producer Deborah Flora then asks the question proposed by the movie’s title, “Whose children are they?”

The rest of the movie is divided into several sections about several controversial issues in America’s educational system today. The topics include such issues as Cultural Marxism in the schools, the Covid Shutdown, Critical Race Theory being taught in the public schools, lack of discipline in the schools, the new “Comprehensive Sex Education” curriculum in the public schools, and Indoctrination Versus Education. The sections show how wealthy teacher unions, leftist school administrators and school board members, radical teachers, and leftist activists have infiltrated the public schools to promote a radical communist, socialist, sexually perverted agenda, to indoctrinate vulnerable school children to parrot that agenda, and to destroy traditional American, Jewish, Christian, Western values and institutions. At the same time, the movie argues, these leftists are reducing (if not eliminating) academic standards in math, reading and science. Each of the sections contain multiple interviews with parents, educational experts, teachers, and conservative activists who oppose this radical leftist agenda in American schools.

In one of many enlightening parts of the movie, one of the conservative activists mentions some of the communist goals that today’s Cultural Marxists, Critical Race Theorists and public school leaders have adopted. For example, they want to “belittle all forms of American culture, discredit the Founding Fathers, break down morality by promoting pornography and obscenity in books, eliminate prayer and religious experience.” Of course, according to Marxism and communist organizations all over the world, children belong to the State, the government, not the parents. This is why, the movie argues, President Biden’s hand-picked FBI and Justice officials started in 2021 to calling parents who spoke out at school board meetings “domestic terrorists.” To buttress its case, the movie includes comments from parents who grew up in Communist China, Communist Cuba and Communist Romania equating schools in those communist countries to what’s going on in America’s public schools today.

At 120 minutes (not counting credits), WHOSE CHILDREN ARE THEY? is a little too long. However, it’s an informative, convincing, lively movie that will inspire parents and other concerned American citizens to take a stand against the godless leftist jihad in the public schools working to destroy America’s cultural, social and political heritage and values, indoctrinate children with radical communist values, groom children into performing X-rated, perverse sex acts, and remove the influence of parents from their children’s education. The movie is chock full of facts, incidents and examples supporting its thesis. The only thing missing from the movie, perhaps, is a short section answering some of the attacks leftists often make against the side that the movie represents.

In its section on sex education, WHOSE CHILDREN ARE THEY? has some sexual references and sexual obscenities for body parts. So, MOVIEGUIDE® advises caution for teenagers and adults. Young teenagers and pre-teen children should not see the movie, and don’t have to see the movie. Unless, of course, you edit out the sex education section.

All in all, however, WHOSE CHILDREN ARE THEY? is a must-see movie for parents, teachers, elected officials, political candidates, and other adults, including voters. It has a very strong Pro-American, conservative, anti-communist worldview exposing the demonic deeds of darkness. As such, it makes a convincing argument for school choice.