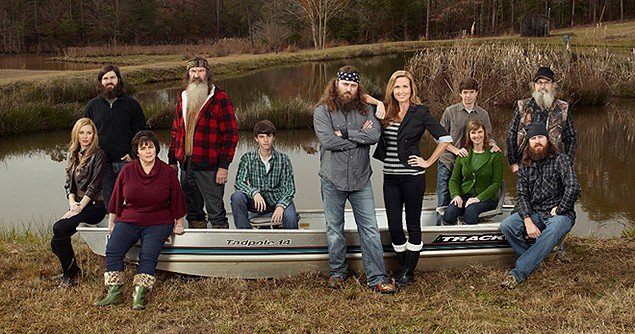 DUCK DYNASTY is coming to the big screen next year.

Two stars of the popular A&E television series DUCK DYNASTY will make their big screen debut in the Spring of 2014. Willie Robertson and his wife, Korie, are featured in the new movie GOD’S NOT DEAD.

GOD’S NOT DEAD is a new Christian movie about faith and the lengths one young man will go to defend his belief in God.

The movie stars Kevin Sorbo from SOUL SURFER and the TV series HERCULES and ANDROMEDA, Shane Harper of HIGH SCHOOL MUSICAL 2, and features a concert appearance by Christian “superband” Newsboys. It also stars Dean Cain of LOIS & CLARK:  THE NEW ADVENTURES OF SUPERMAN.

The Robertson family has been making waves this year with their larger than life personalities influencing everything from politics to wine making. Vance McAllister recently won a Congressional seat thanks to the support and endorsement of the Duck Dynasty family, and the multi-millionaire duck call makers are putting their mark on the wine business by teaming up with Napa Valley wine producer Trinchero Family Estates.

The Robertson family has also extended the Duck Dynasty brand into book sales. Willie Robertson’s book, THE DUCK COMMANDER FAMILY, sold more than one 1 million copies on Amazon.com, and Si Robertson’s new book, SI-COLOGY, is the Number One in the Outdoor Recreation and Hunting categories at Amazon.