Freedom Is Not Free! 10 Movies that Beautifully Honor Our Fallen Soldiers 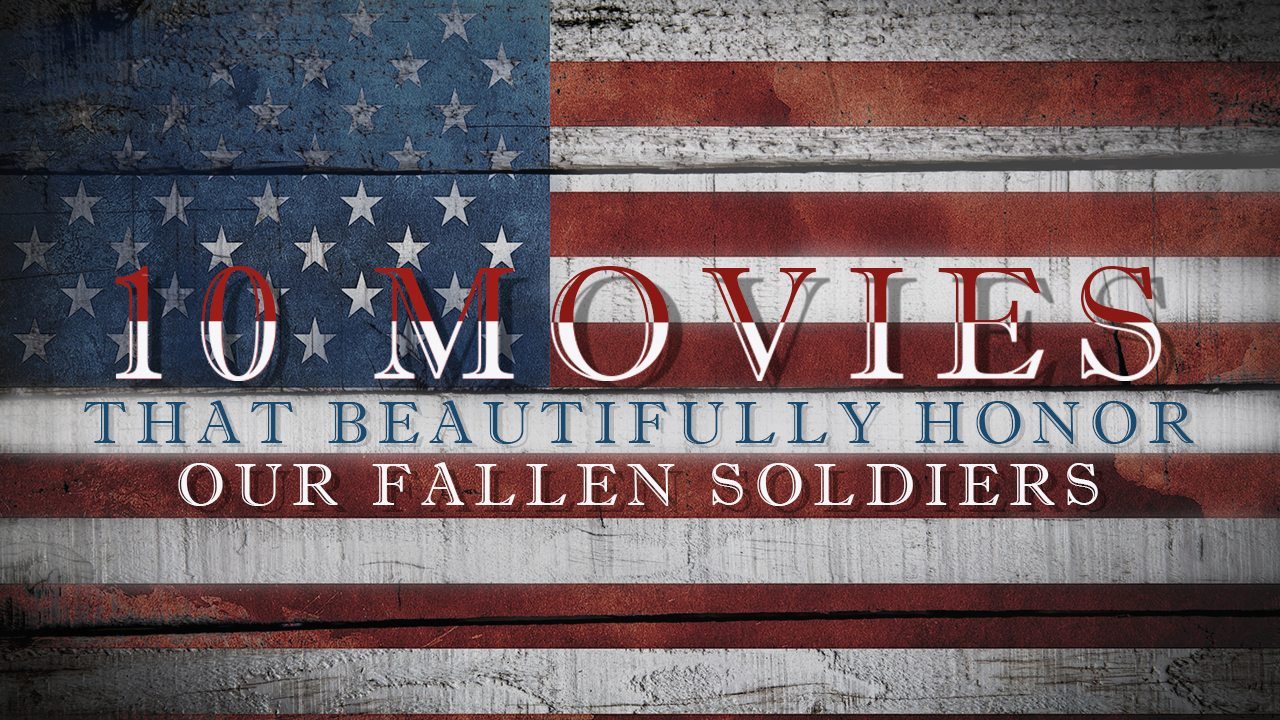 Freedom Is Not Free!

On Memorial Day, we honor the men and women who have died in the armed forces protecting the values of life and liberty that America was founded upon. There are select movies that we at Movieguide® believe commemorate this national holiday in unique ways, so we’ve put together a list of 10 of our favorites for your enjoyment. Each movie on the list features different characters, some based on real life, and some fictional.

Some movies, like HACKSAW RIDGE, are about conscientious objectors who refuse to kill but fulfill their patriotic duties in surprising, inspiring ways, and others like ACT OF VALOR and SANDS OF IWO JIMO feature warriors willing to make the ultimate sacrifice. Some movies like CAPTAIN AMERICA:  THE WINTER SOLDIER and THE PATRIOT are about heroes rising up against their own tyrannical governments that are taking away the liberty they were assigned to protect. Each movie, however, has a common theme that honors the soldier, and the basic values that these soldiers were fighting for, that being freedom, dignity and respect, and many being guided by faith as they fight for these values. As you watch one or more of these movies over the next few days, keep in mind the real sacrifices that are made daily so that you can raise a family, worship freely and have every opportunity to succeed.

SERGEANT YORK: Quality: * * * * Acceptability: +4 – 1941: Based on the diary of Alvin York, the most decorated soldier in World War I, this moving story tells about a willful man, played by Oscar winner Gary Cooper, who comes to Jesus Christ and comes to terms with war. After his conversion, Alvin is deeply troubled about fighting in the war because he cannot reconcile the Bible’s teaching against killing with participating in a war to defend his country. Before making his final decision about filing for conscientious objector status, Alvin spends time reading the Bible and being alone with God on the mountain. There it becomes clear what God wants him to do. Sensitively directed by the quintessential masculine director, Howard Hawks, SERGEANT YORK is a great American movie; it’s also a great Christian movie.

: Quality: * * * * Acceptability: +3 – 1939: Action, drama, sentiment, humor deftly woven into the best Christian movie ever made so far about America’s War for Independence. It also is a wonderful portrayal of the American pioneer spirit. John Ford creates another masterpiece here, capturing the flavor of Colonial life in this vigorous, courageous story of settlers defending their liberty in upstate N. Y. during the Revolutionary War.

: Quality: * * * * Acceptability: -2 2002: WE WERE SOLDIERS is a true story starring Mel Gibson as Col. Hal Moore, who led the first American helicopter troops into battle against the Communist North Vietnamese in 1965. Despite some minor flaws and very strong, bloody combat scenes laced with some strong profanities, WE WERE SOLDIERS delivers a riveting drama with strong appeals to God in the Name of the Holy Christian Trinity.

: Quality: * * * * Acceptability: -2 2000: THE PATRIOT stars Mel Gibson as a family man named Benjamin Mark, who wrestles with his desire for revenge and the just cause of the American War for Independence in the late 1700s. The cruel British Colonel Tavington, played impeccably by Jason Isaacs, shoots Ben’s 15-year-old son, Thomas, as Ben’s oldest son, Gabriel, is led away captive. Thus, Ben’s fury is unleashed, and taking his two youngest boys, he goes into the woods to fight a guerilla war, slaughtering the British and rescuing Gabriel. Ben continues to wrestle with his sinful desire for vengeance and the worthiness of the Revolutionary cause. Eventually, he sees that he needs to stay the course, and he rejects vengeance to take up the flag. The violent battle scenes may concern older moviegoers, while younger moviegoers might chafe at the soul-searching, but the heart of this movie is faith. Prayer runs throughout the film, and the Cross of Jesus Christ is lifted up. THE PATRIOT is also a terrific, engrossing movie. One can only hope that this soul searching and pain will lead many to search for the God to whom Ben prays so often in this story.

: Quality: * * * * Acceptability: -1 1993: Ron Maxwell’s epic film GETTYSBURG, based on Michael Shaara’s Pulitzer Prize-winning novel THE KILLER ANGELS, dramatically depicts the three most courageous days in American history when North and South were arrayed against each other in the decisive battle fought on the Gettysburg, Pennsylvania plains. The scenes re-enacting Pickett’s charge are believed to be the largest period scale sequences filmed in North America since D.W. Griffith’s BIRTH OF A NATION. The movie overflows with positive references to God and prayer. Aside from some of the curses used by the soldiers, GETTYSBURG is a magnificent movie that every American should see.

UNBROKEN: Quality: * * * * Acceptability: -1 2014: UNBROKEN is an immensely powerful biographical movie about the life of Louis Zamperini, who became a famous evangelist. The son of Italian immigrants, Louie goes from being a mischievous young boy to an Olympic runner at the 1936 Berlin Olympics. When World War II begins, Louie joins the Air Force, but a tragic malfunction causes his plane to crash one day. Only Louie and two men survive. Stranded for weeks on a raft, Louie and the other men strive to survive, but bad goes to worse when they’re taken by the Japanese army as prisoners of war. Through extreme hardships, Louie refuses to give up. UNBROKEN is a worthy, well-directed adaptation of the riveting biography by Laura Hillenbrand, but it doesn’t cover Louie’s actual Christian conversion after the war. It’s still an inspiring story about fighting for liberty amid injustice, retaining one’s values despite intense persecution, persevering when all is lost, and holding onto hope when all hope seems gone. Also, the movie extols Christian prayer and loving your enemy. UNBROKEN warrants extreme caution due to some intense violence and foul language.

ACT OF VALOR: Quality: * * * * Acceptability: -2 2012: ACT OF VALOR is a riveting, explosive war movie. Real Navy Seals play the key roles. Two Seal Team 7 leaders send their team to Latin America. The mission is to rescue a female CIA agent captured by a drug lord, in cahoots with a Muslim terrorist. The agent has information confirming the link. An intense firefight occurs at the drug lord’s secret jungle compound. The team barely gets away, though one soldiers loses an eye. The drug lord is connected to a Russian arms dealer. The dealer is childhood friends with the terrorist planning the attack on America. Can the Seals get to the terrorist and his gang before they enter the U.S.? ACT OF VALOR sizzles with action. The action scenes are among the best, most realistic ones ever filmed. The movie isn’t all about the action, however. It’s also a heartfelt, patriotic parable about the emotional toll defending one’s country can take on soldiers and their families. That said, the war violence is very strong, with bloody scenes and pointblank shootings. There’s also plenty of strong foul language. ACT OF VALOR is designed for mature adults.

CAPTAIN AMERICA:  THE WINTER SOLDIER Quality: * * * * Acceptability: -1 2014: In CAPTAIN AMERICA:  THE WINTER SOLDIER, a mysterious assassin called “the Winter Soldier” critically wounds Nick Fury, Captain America’s boss at SHIELD. Fury hands Captain America a flash drive showing SHIELD is compromised. “Don’t trust anyone,” Fury tells Cap before lapsing into a coma. Using the flash drive, Cap learns a secret cabal has infiltrated SHIELD. They also control the Winter Soldier. Ultimately, they plan to use newly developed SHIELD technology to rule the world. Now, Captain America and the two friends he trusts must avoid not only the Winter Soldier, but all of SHIELD, so they can stop this evil plot. CAPTAIN AMERICA:  THE WINTER SOLDIER is a terrific action movie. It hits all the right plot points and adds some nifty twists. Once again, Chris Evans does a superb job as the iconic hero. The supporting players are also excellent. Happily, THE WINTER SOLIDER has a strong moral, patriotic worldview. Captain America and his friends are working to protect both American liberty and world freedom. THE WINTER SOLDIER warrants caution, however, for intense action violence and brief foul language.

HACKSAW RIDGE Quality: * * * * Acceptability: -2 2016: HACKSAW RIDGE is a great, powerful, emotive Christian war movie. Andrew Garfield stars as Desmond Doss. Desmond’s father is an abusive alcoholic because of the terrible things he experienced during World War I. When World War II breaks out, Desmond and his brother join the service. However, Desmond promised God he would never touch a weapon or take a life. So, he enlists as a conscientious objector medic. Eventually, the Army permits Desmond to go into battle without a weapon. Armed only with his faith, Desmond enters one of the most brutal battles in the war. Brilliantly directed by Mel Gibson, HACKSAW RIDGE is a captivating movie about uncompromising faith and miraculous courage. It will make you laugh and cry. It’s a story about not compromising one’s values, faith and commitment to God, and about standing firm when others try to force you to compromise. Eventually, Desmond’s courage and heroic commitment to Jesus Christ changes hearts and minds. HACKSAW RIDGE is truly a great movie, but there’s lots of strong, bloody violence and some foul language; so, strong caution is advised.

SANDS OF IWO JIMO:  Quality:  * * * * Acceptability:  +1 1949:  SANDS OF IWO JIMO stars John Wayne in one of his most iconic roles:  Sergeant John Stryker, a tough drill sergeant during World War II who whips the young men into shape. Sgt. Stryker has to deal with a rebellious recruit with a chip on his shoulder, Private Peter Conway, played by John Agar. What Conway doesn’t realize is that Stryker’s methods may seem harsh but they are absolutely necessary for the infantry soldiers under his command if they are going to have the best chance to survive. The ending to this movie is a brilliant example of sacrifice and duty, with Private Conway picking up the mantle that Stryker has bequeathed to him and the other men. As Stryker is wont to order the men during the movie, “Saddle up!”

Editor’s Note:  Some of these recent movies contain strong subject matter, so caution or even extreme caution is warranted, even for older teenagers and adults.