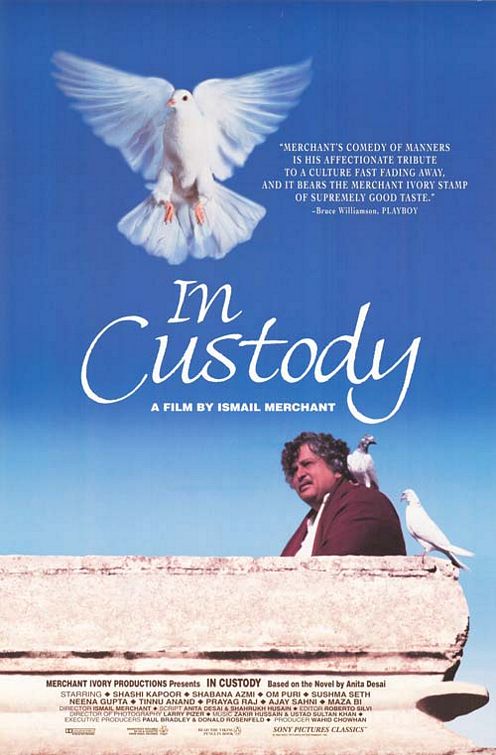 IN CUSTODY tells the tale of a naive university professor obsessed with memorializing the poetry of one of the last great and dying Urdu poets. Though finely acted, this less-than-polished directorial debut is less than satisfying.

(FR, S, A) Moral worldview, but portrayed in context of false religion; implied sexual immorality; and, alcohol use & abuse.

IN CUSTODY tells the tale of a naive university professor obsessed with memorializing the poetry of one of the last great and dying Urdu poets. The poet, Nur, is a man at the end of his physical and creative life who sees the waning of the Urdu culture and language. Physically ill, disconsolate and alcoholic, he allows his sycophantic devotees to turn their nightly gatherings into drunken debauchery, which in turn leads to fighting with his two wives. Into this fray enters Deven, a naive, middle-class university professor of the Hindi language and an aficionado and lover of Urdu poetry. His repeated attempts to interview Nur are continually thwarted by Nur’s ill health, his drunken devotees and the jealousy of his second wife.

Though the film is by no means a poor one, one would expect much more from so experienced a filmmaker as Ismail Merchant, better known as the producing half of the Merchant/Ivory team which has created such classic English dramas as THE REMAINS OF THE DAY. However, IN CUSTODY fails to satisfy, giving the appearance of a less-than-polished first-time feature and having much to improve, including casting, editing and storyline. Merchant does draw some very fine performances from his Indian cast. Yet, the overall story does not fully engage the viewer, since Nur doesn’t seem so much a tragic figure as a foolish one. At the film’s end, we are left trying to feel that the rescuing of Nur’s Urdu poetry is really as important as it should have been.