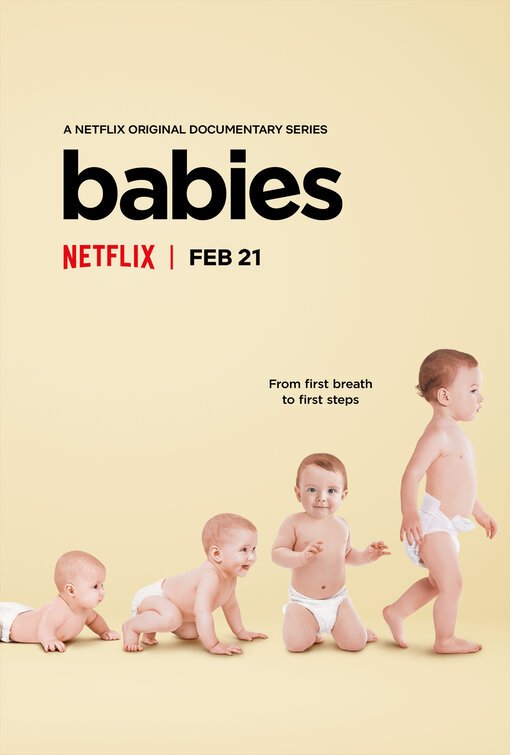 A Netflix documentary series, Part 2 of BABIES continues to follow the babies from the previous season and how they mature and develop during their first year of life up until they’re toddlers. Like the previous season, each episode showcases different scientists and how they’re studying babies. Over the course of six episodes, audiences learn about things from how babies learn to move to when they understand desires.

BABIES: Part 2 is incredibly educational, especially if you’re an expecting parent. Some-times the episodes drag if the viewer isn’t interested in what the scientist is discussing, but worthwhile information is still presented. Even better, BABIES: Part 2 has a strong moral worldview that extols parenthood, family, pro-life values, and training up children. For ex-ample, one scientist learns she can still be passionate and love her career while being a good mother. The series uses a diverse cast of babies and scientists from around the world to show that the concepts and research applies to babies everywhere. BABIES: Part 2 does include images of mothers breastfeeding babies, so MOVIEGUIDE® advises caution for younger children.

(BB, L, N, A): Dominant Worldview and Other Worldview Con-tent/Elements: Strong moral worldview extols parenthood, family, pro-life values, and training children properly
Foul Language:
One OMG profanity (OMG), one “d” ob-scenity, one “h” obscenity
Violence:
No violence
Sex:
No sexual content, one kiss be-tween a married couple
Nudity:
Naturalistic nudity when baby was born of the stomach and chest area, skin to skin contact between mother and baby but only mothers upper chest was shown, breastfeeding, and one instance of female breast nudity
Alcohol Use:
Wine seen in an interview but was not being drank
Smoking and/or Drug Use and Abuse:
No smoking or drugs; and,
Miscellaneous Immorality:
Nothing else objectionable.

OVERVIEW REVIEW: A Netflix documentary Part 2 or Season 2 of BABIES goes full steam ahead and picks up where Part 1 left off, providing audiences with scientific research about babies in their first year of life up until they’re toddlers. Part 2 adds six more episodes that follow many of the same babies from Part 1.

Part 2 covers the topics of what babies know, movement, sense, relationships, nature and nurture, and toddlers. The first episode dives into how babies are smarter than we realize, and that they’re born with expectations of the world. This episode also features a scientist who promotes pro-life ideals that mothers can work and be passionate about their career while raising a child.

The episodes that follow showcase many scientific experiments to back up the research. Scientists present how the brain builds connections, the nutrition of a baby, and how what the mother eats can affect what the baby likes and doesn’t like, how genetics can help pre-dict personality traits, how babies need to learn from mistakes in order to achieve goals, and how toddlers can understand the desires of older adults around them.

BABIES: Part 2 is incredibly educational, especially if you’re an expecting parent. Over the course of the six episodes, at least two different scientific studies are showcased per episode. Sometimes, one is more engaging than the other, but they still provide incredible information and show how intricate and complicated human beings are, even as infants. While sometimes the episodes drag if the viewer isn’t interested in what the scientist is dis-cussing, worthwhile information is still presented.

BABIES: Part 2 also catches the audience’s attention because while the scientists are test-ing sometimes thousands of babies per study, the show scales everything back and allows the audience to make a real connection with the newborn babies the episodes follow. Each family records what seems to be video diaries of their journey with their new children and talk about the ups and downs of parenthood. The parents, though, are always thankful and happy to be blessed with a child.

BABIES: Part 2 has a strong moral worldview that extols parenthood, family, pro-life val-ues, and training up children. The show uses a diverse cast of babies and scientists from around the world to show that the concepts and research applies to babies everywhere. Even though the series relies heavily on science, it only strengthens the belief that we have a Creator and He created us to be with and around family and the people who love us. The series does include images of mothers breastfeeding babies, so MOVIEGUIDE® advises caution for younger children.