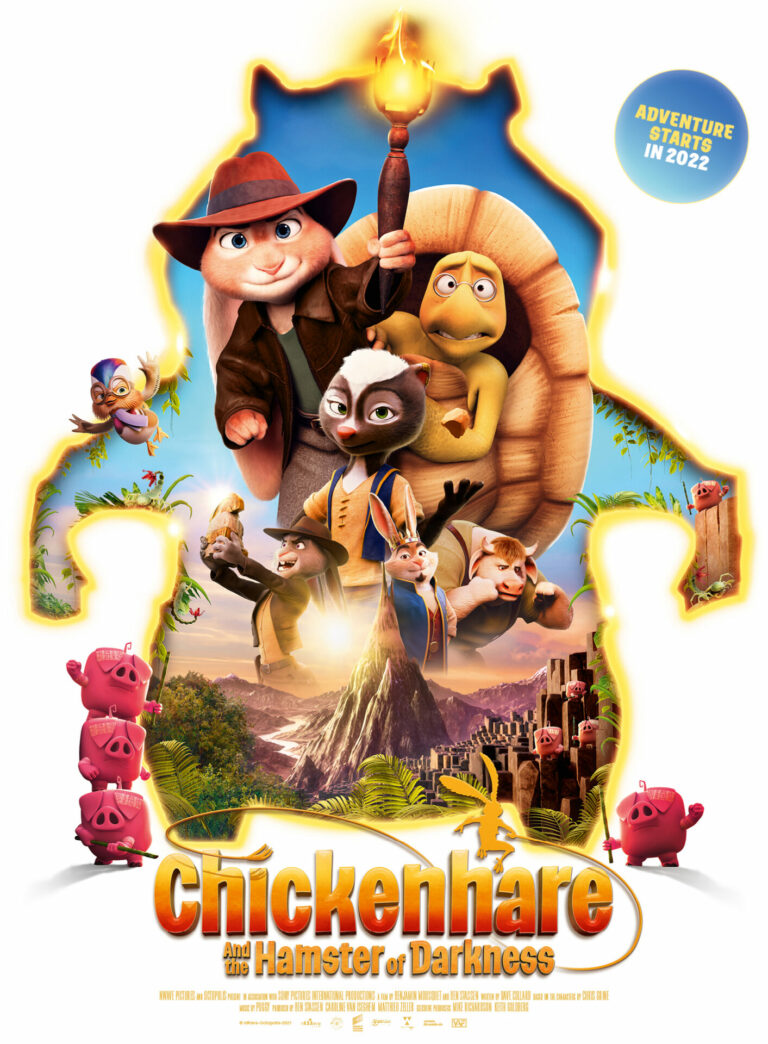 CHICKENHARE AND THE HAMSTER OF DARKNESS is an animated fantasy adventure on Netflix. An adventurous rabbit named Peter is looking for treasure but finds an orphaned baby who’s half chicken and half hare. Growing up, Chickenhare loves and admires his adoptive father, who’s become king and continues to go on adventures. Chickenhare wants to join the Royal Adventure Society, but he fails the test. So, he decides to find a long-lost artifact with magical occult powers. However, his father’s brother is also trying to find the treasure so that he can steal the father’s throne.

CHICKENHARE AND THE HAMSTER OF DARKNESS is funny, engaging and fast moving. Also, the characters are cute and relatable. The movie has a strong moral worldview about good overcoming evil, including occult evil. In addition, the title character’s adopted father supports and encourages his son. However, there are some Romantic elements about chasing your dreams and embracing your differences. Later, though, the differences are seen in terms of everybody embracing their special gifts. MOVIEGUIDE® advises caution for children because of some scary moments and cartoon action violence.

(BB, O, Ro, FR, V, A, M)
Dominant Worldview and Other Worldview Content/Elements:
Strong moral worldview of good versus evil, including occult evil (the villain has a magical scepter that releases some mean hamster ghosts), also shows father supportive and encouraging to his son, with some Romantic elements about chasing your dreams and embracing your differences, but the differences are later seen in the terms of everybody embracing their special gifts, plus the good guys encounter some small pagan pigs who worship a god to whom they sacrifice, but the good guys escape
Foul Language:
No profanities or obscenities, but a character is called a freak, the word “idiot” is used, and three’s a joke about smelling a dirty diaper when a skunk sprays some bad guys
Violence:
Some light and strong cartoon action violence such as hero must run through a test of jumps and mechanical devices, hero falls onto a net protecting animals from falling into a bottomless pit, characters avoid a rolling wooden wheel and walls with spikes that close in on them, skunk uses martial arts to fight big gorilla character, a tribe of small pigs shoot darts into characters to put them to sleep, two characters run away from a giant ball of stone, small pigs hop on top of one another to form walls to entrap people, pigs want to throw good guys into a volcano to sacrifice them to their god, but they escape, villain leaves good guys to freeze to death, villain conjures ghosts of thousands of hamsters to do his bidding, swordfight between villain and his brother, villain and hero fight over magical device that villain is using to take over his brother’s kingdom
Sex:
No sex
Nudity:
No nudity
Alcohol Use:
Animals drink wine in a bar
Smoking and/or Drug Use and Abuse:
No smoking or drugs; and,
Miscellaneous Immorality:
Jealous villain lies, tricks and deceives others, and hero’s friend lies to stop tribe of small pagan pigs.

CHICKENHARE AND THE HAMSTER OF DARKNESS is an animated comedy on Netflix loosely based on the graphic novels written by Chris Grine. Two rabbit brothers, Peter and Lapin (“La-pen”) are on the hunt to find a treasure called the Hamster of Darkness. Instead, they find a baby rabbit with chicken feet and several feathers on his head. Peter takes Chickenhare home to raise as his own son.

Fifteen or so years later, Peter has been chosen king of Featherbeard by his father, and Lapin has been thrown in prison for trying to take over the kingdom. Meanwhile, Peter has continued to go on adventures, earning the admiration and love of his adopted son, Chickenhare.

After hearing all the stories of the adventures his father, Chickenhare becomes obsessed with going on adventures just like the King. However, he’s embarrassed by the way he looks, so he starts hiding the feathers on his head with an Indiana Jones style hat and wears boots that look like rabbit’s feet to hide his chicken legs. His father though, tries to tell Chickenhare, “The things that make us different are the things that make us special.” Peter hopes his son is just going through a phase.

Chickenhare longs to be part of the Royal Adventure Society, but the crazy rabbit boots he’s wearing literally trip him up, and he fails the elaborate test all members must pass. Unfortunately, it’s not possible to do the test twice. So, Chickenhare sets out to find the one treasure no one has found – the Hamster of Darkness. Legend states it can be found while looking at a particular constellation at nine in the morning. He visits his uncle Lapin to find the original text about the treasure so he can figure out how to find it. However, Lapin turns the tables on him and escapes, along with a couple henchmen. Lapin plans to find the artifact and use its powers to take over the kingdom.

All’s not lost, however. Chickenhare discovers that, despite being locked in a cell, his uncle figured out how to decode the location of the Hamster of Darkness using the sun and a map. Unhappily, Chickenhare figures out the location after his father, the King, has already set sail after his brother, but he’s sailing to the wrong location. So, Chickenhare convinces his servant, a timid turtle named Abe, to set sail with him for the mountain where the Hamster of Darkness is located.

However, to get to the mountain, they must pass through a dangerous desert and a jungle. So, they need a guide. They think they find one with a rat named Rusty, but he turns out to be working with one of the uncle’s henchmen, a large gorilla. Chickenhare and Abe are rescued by a skunk trained in martial arts named Meg, who agrees to guide them through the desert.

So, the question is, will Chickenhare, Abe and Meg make it to the Hamster of Darkness before Chicken hare’s uncle and his gang?

CHICKENHARE AND THE HAMSTER OF DARKNESS is funny, engaging and fast moving. It will keep children’s attention throughout the movie. Also, the characters are cute and relatable because every child wants to be accepted and loved. The computer-generated graphics are colorful and beautifully done, with a great use of camera angles and animated effects to keep children engaged.

The movie has a strong moral worldview about good overcoming evil, including occult evil. Also, the title character’s adopted father supports and encourages his son. However, there are some Romantic elements about chasing your dreams and embracing your differences. Later, though, the differences are seen in the terms of everybody embracing their special gifts. MOVIEGUIDE® advises caution for children because of some scary moments and cartoon violence.

Watch CHICKENHARE AND THE HAMSTER OF DARKNESS: