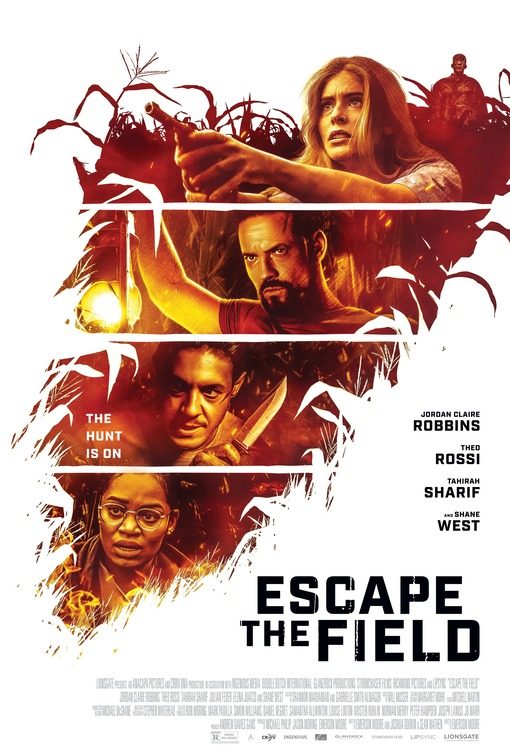 ESCAPE THE FIELD is an tense horror, science fiction thriller. Six adults are kidnapped and wake up in an open clearing surrounded by a cornfield. They must fight against booby traps and a violent but unseen creature. A woman named Sam becomes the nominal leader of this ragtag group of fearful folks. Sam and Tyler formulate the various steps they may need to escape, particularly putting together an assortment of complex clues. However, their best fighter gets hit by a poison dart and starts acting erratically.

ESCAPE THE FIELD is relentlessly paced, with barely a wasted moment in its 80 minutes. Co-Writer/Director Emerson Moore does a stellar job wringing maximum tension out of an obviously limited budget. He relies on enigmatic music and mysterious, distant sirens to create a fearful atmosphere. To his credit, the violence isn’t dwelled upon, and any gore is momentarily shown, not exploited. ESCAPE THE FIELD has a moral worldview, where people help one another in dire situations. It also has no lewd content, but the R-rated thriller does contain strong obscenities and profanities. So, MOVIEGUIDE® advises extreme caution.

(BB, Pa, LL, VV, M):
Dominant Worldview and Other Worldview Content/Elements:
String moral worldview about six kidnapped, stranded people fighting their way out of booby traps and against a violent but unseen creature, but the main characters all repeatedly go out of their way to help each other when injured and to soothe each other’s fears, though there is some immoral behavior, such as strong foul language
Foul Language:
19 obscenities (including 13 “f” words) and three strong Jesus profanities
Violence:
Strong violence includes woman accidentally stabs man, with quick glimpse of bloody wound, man is sliced twice by a big knife held by an unseen figure, man grabs a woman by the neck and nearly chokes her, man and woman fall separately into dangerous and deadly booby traps but no blood shown, two men punch, kick and slice each other in an extended fight scene that’s not very graphic, a quick distant shot of a man’s severed torso hanging on a stick
Sex:
No sex
Nudity:
No nudity
Alcohol Use:
No alcohol use
Smoking and/or Drug Use and Abuse:
No smoking or drug references; and,
Miscellaneous Immorality:
Jealousy, paranoia, anger.

ESCAPE THE FIELD is an impressively tense horror, science fiction thriller about six adults who are kidnapped and placed in open clearing surrounded by a large cornfield and must fight against booby traps and a violent but unseen creature. ESCAPE THE FIELD maximizes its low budget to create maximum tension and is packed with good performances, with strong moral elements where the people help each other, but it’s marred by strong foul language and violence.

Six adults each wake up in a cornfield with a circular path cut into the middle of its vast terrain. Each has an item – a gun, a knife, a lamp, etc. – that each have a symbol of a tree on them. They were each abruptly taken from their homes or jobs, knocked out and revived, with total confusion about what’s happening to them.

A woman named Sam (Jordan Claire Robbins) is the first person to wake up and becomes the nominal leader of this ragtag group of fearful, unwitting folks. She and Tyler (Theo Rossi) help formulate the various steps they believe are needed to escape, particularly putting an assortment of complex clues together.

Ryan (Shane West) is the best fighter in the group. However, his unhinged personality is made worse when he’s hit by a poison dart and his eyes turn dark red, while his temper gets ever more dangerous, not only to the creature they’re trying to outrun or kill, but also to his fellow escapees.

And, looming above them all is a mysterious statue of a man that’s revealed to have multiple levels of clues and booby traps rigged into it. As the night and day get ever more tense, will the group manage to keep their wits about them and help each other get out? Or will paranoia and jealousy destroy them even if the creature doesn’t?

ESCAPE THE FIELD is well acted and relentlessly paced, with barely a wasted moment in its 80-minute running time (which is followed by a ridiculous nine minutes of credits). Co-Writer/Director Emerson Moore does a stellar job wringing maximum tension out of an obviously limited budget, relying on enigmatic music and occasional mysterious sirens in the distance to create an unbelievably fearful atmosphere.

To his credit, none of the violence is dwelled upon, and any gore is just momentarily shown, rather than exploited. These are rare, commendable traits for a low-budget horror film. ESCAPE THE FIELD has no sex or nudity, but the R-rated movie does have some strong obscenities and profanities. Finally, the movie has a strong moral worldview where the main characters all repeatedly go out of their way to help each other when injured and to soothe each other’s fears