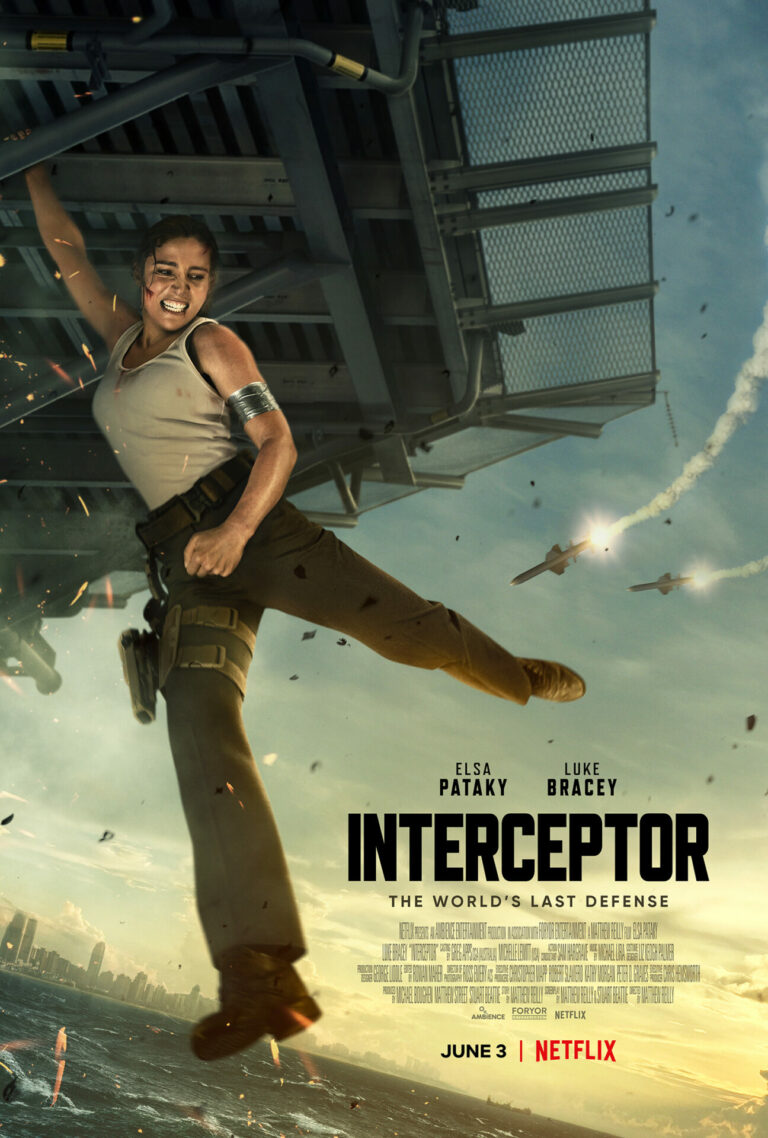 INTERCEPTOR is a military action thriller on Netflix. Captain J.J. Collins is a female military officer on a base located deep in the Pacific Ocean. Her base is one just two American bases equipped with missiles that can intercept nuclear missiles in mid-air. One night, 16 nuclear missiles are stolen from a Russian nuclear facility. The rogue soldiers make a surprise attack on Collins’ base so they can render the interceptor missiles hopeless and ensure the nuclear missiles can hit 16 American cities. Collins and a nerdy underling soldier must team up to stop the attack and save America.

INTERCEPTOR goes far beyond B-movie badness and heads directly for Grade Z level. The script logic is poor and repetitive. The special effects are hilariously pathetic. Also, the casting of Elsa Pataky as Captain Collins is inexplicable. She has a noticeable Russian accent and leads a full slate of wooden performances. Positively, INTERCEPTOR has a strong moral, patriotic worldview. Thus, its heart may be in the right place, but the execution is atrocious. INTERCEPTOR contains some strong foul language and extreme violence.

(BB, PP, CapCap, ACAC, C, LL, VVV, S, A, M):
Dominant Worldview and Other Worldview Content/Elements:
Strong moral, patriotic, or-capitalist worldview where the good guys fight anti-capitalist terrorists trying to nuke the United States, plus one soldier prays to God asking to protect his family before he’s shot dead, but the execution is just atrocious, though the movie’s heart is in the right place
Foul Language:
15 obscenities (including five “f” words), one Jesus profanity, three GD profanities, and the word “whore” is used
Violence:
People are shot and stabbed in the eye with a gun, people’s heads are cut off with razor wire, a scene of torture where a man’s fingers are cut off, lots of punching and kicking in close quarters combat in which the female heroine is often endangered by choking, and nuclear missiles are exploded in midair
Sex:
No depicted or implied sex scenes, but it’s a running side plot that the heroine was sexually harassed by a general and has been threatened ever since by fellow soldiers, there are attempts at sexual assault and rape, and one brief shot shows a clothed general brushing against heroine from behind at an event and grabbing her upper thigh
Nudity:
No nudity
Alcohol Use:
Brief alcohol use
Smoking and/or Drug Use and Abuse:
No smoking or drugs; and,
Miscellaneous Immorality:
Villains are military men who are angry at America and spout lots of anti-American and anti-capitalist propaganda, though they’re clearly shown as bad guys.

INTERCEPTOR is a military action thriller on Netflix about a female American Captain who must fight off rogue soldiers out to nuke America so she can launch some interceptor missiles to stop some stolen nuclear missiles before they strike America. Despite having a strong moral, patriotic worldview, INTERCEPTOR is a hopelessly lame thriller with horrible casting and worse performances, proving that the tradition of terrible Z-grade filmmaker Ed Wood survives. The movie sounds like it could be fun but is simply laughable in every way and a bore with repetitive fights that seem to drag the movie out forever despite the running time being less than 100 minutes.

Captain J.J. Collins (Elsa Pataky) is a female military officer based on SBX-1. Located in the Pacific Ocean, SBX-1 is one of just two US bases in the world equipped with missiles that can intercept and explode nuclear missiles in mid-air.

One night, the Navy spreads the intel that a Russian nuclear facility was attacked, and 16 ICBM nuclear missiles stolen (which is an absurdly tall order for a surprise attack). Then some rogue soldiers, led by Alexander Kessel (Luke Bracey), make a surprise attack on SBX-1 to try shutting it down and capsize it, thus rendering the interceptor missiles hopeless. Doing this, Kessel and his men can ensure a nuclear missile can hit Los Angeles, and, then later, 15 other American cities.

Collins and a nerdy underling soldier team up to stop the SBX-1 hijacking and save the planet Meanwhile, Kessel’s underlings punch, kick, throw grenades, and shoot at Collins as she takes them down one at a time. Regrettably, the fights are repetitive, cliched and boring. Every action viewer has seen such scenarios countless times in other B-movies, and the ones in INTERCEPTOR are nothing new.

INTERCEPTOR goes far beyond B-movie badness and heads directly for the Z-grade works of Ed Wood, generally considered the worst filmmaker of all time for trash classics like PLAN 9 FROM OUTER SPACE. The script logic in INTERCEPTOR is poor and repetitive, the special effects as nukes explode are hilariously pathetic, and the casting of Elsa Pataky as Captain Collins is inexplicable.

Pataky is playing all-American Collins despite having a noticeable Russian accent throughout. One might assume perhaps Collins had a Russian parent, but her father in the movie is a gruff but undeniably accent-less American man. If director Matthew Reilly felt the need to cast her, he should have had her be a Russian hero breaking onto SBX-1 while giving chase to the men who robbed her Russian facility.

Pataky’s acting is as distractingly bad as her accent, leading a full slate of performances so wooden they could be part of a Communist Party meeting. Eventually, the mystery of her casting is solved at the end, when her husband Chris Hemsworth of THOR fame is listed as the prime executive producer of INTERCEPTOR. It’s obvious he must have put it in his Netflix contract that the streaming service had to finance a movie with his wife in the lead as part of his deal to make normal-quality movies for them.

Positively, INTERCEPTOR has a strong moral, patriotic worldview. Thus, its heart may be in the right place, but the execution is just atrocious. The entire movie should have been intercepted before being placed on Netflix.