JOHN MARSHALL: THE MAN WHO MADE THE SUPREME COURT 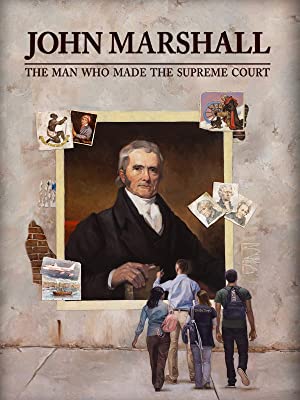 JOHN MARSHALL:  THE MAN WHO MADE THE SUPREME COURT is a documentary about the most important chief justice of the Supreme Court. Marshall made the Supreme Court into the influential institution it has become since he ran the court from 1801 to 1835. The beginning of the documentary discusses Marshall’s life before the court. It then details eight important cases that Marshall decided with the other members of the court. A host of constitutional scholars and history scholars discuss the cases. Interspersed with these interviews and discussions are visits to the places where Marshall lived and the states affected by his rulings, and performances by actors reading snippets from some arguments before Marshall’s court and his rulings.

JOHN MARSHALL:  THE MAN WHO MADE THE SUPREME COURT is very informative, absorbing and detailed, but it’s very academic and a bit long. Based on the book by conservative historian Richard Brookhiser, it has a strong moral worldview, with strong Pro-American elements venerating the United States Constitution. However, it doesn’t say anything about the biblical, divine foundations of the American system of law and government.

(BB, PPP, H, V, A, M):
Dominant Worldview and Other Worldview Content/Elements:
Strong moral worldview, with very strong Pro-American, patriotic, pro-constitutional elements, in a documentary about the most influential Supreme Court Justice, mitigated by a secular approach to the subject matter
Foul Language:
No foul language
Violence:
Some references to and paintings of war such as a painting of soldiers in the American War of Independence shows muskets being fired, and the soundtrack has sounds of bullets being fired and whizzing
Sex:
No sex
Nudity:
No nudity
Alcohol Use:
Some alcohol use by constitutional scholars and historians discussing things at dinner, people drink a Mint Julip punch outside playing a game to discuss the movie’s subject, who enjoyed Mint Julips too
Smoking and/or Drug Use and Abuse:
No smoking or drugs; and,
Miscellaneous Immorality:
References to slavery, public sentiment against American Indians and to the hatred between a Supreme Court Justice and his cousin, who just happened to be the President of the United States.

JOHN MARSHALL: THE MAN WHO MADE THE SUPREME COURT is a documentary about the most important chief justice of the Supreme Court in the early history of the United States, who helped establish the Supreme Court as an independent third branch of the federal government, along with Congress and the Presidency. Narrated and based on a book by Richard Brookhiser, a longtime senior editor of a conservative magazine, JOHN MARSHALL is very informative, absorbing and detailed and has a high view of the United States Constitution, but it’s a bit long and doesn’t say anything about the biblical foundations of the American system of government.

Brookhiser begins the movie by discussing Marshall’s biography and background. He discusses Marshall’s military service under George Washington during the American War for Independence, the beginnings of his law career and his marriage to Polly Ambler, the youngest daughter of Virginia’s state treasurer. Marshall favored the ratification of the new Constitution in 1787. He also became aligned with the Federalist Party, headed by Alexander Hamilton and John Adams, who supported a strong national government. However, Adams and the Federalists lost the 1800 elections to the Democratic-Republican Party under Thomas Jefferson, who was a cousin’s of Marshall. Adams became worried about the new power Jefferson and his party would have. So, before Jefferson and his party could take office, he and the Federalists expanded the judiciary and appointed many new judges, including John Marshall as Chief Justice of the Supreme Court when the then Chief Justice suddenly resigned due to poor health (sound familiar?).

From there, the movie details Marshall’s rulings in eight major cases before the Supreme Court, beginning with Marbury v. Madison, the case where Marshall established the doctrine of judicial review. This is the doctrine where the Judicial Branch, headed by the Supreme Court, has the constitutional authority to determine whether a law by the state and federal legislatures or an action by a governor or president is constitutional or not. Other cases involve the treason trial of Aaron Burr, the protection of contracts between private businesses without state interference, the freedom of private businesses to operate between state boundaries, the right of Congress to establish a national bank to carry out its constitutional duties, two cases dealing with the civil rights of American Indians, and one case involving the slave trade where the U.S. Coast Guard confiscated a pirated slave ship. Sadly, regarding the case involving the slave trade, Marshall declined to grant any inherent civil rights to all the slaves involved in the case (Marshall himself was a slave owner). Also, in one of the cases involving Indians, President Andrew Jackson famously refused to enforce Marshall’s ruling that the state of Georgia had no right to exercise control over the Cherokee Indians living within its borders. According to the movie, Jackson’s refusal to enforce the ruling eventually led to the forced removal of the Cherokee from Georgia to Oklahoma in 1838. About 4,000 Cherokee died during this forced removal across miles of land. A year before Marshall’s ruling supporting the rights of Indian tribes as “domestic depending nations” within the United States, subject to the federal government, public sentiment against all Indians had led to the passage of the Indian Removal Act of 1830.

JOHN MARSHALL: THE MAN WHO MADE THE SUPREME COURT is absorbing, informative and detailed. Viewers interested in the development of the Supreme Court and the United States government in their early years will be captivated by the politics and the cases. A host of constitutional scholars and history scholars discuss the cases at length. Among the interviewees are current Chief Justice John Roberts and current Justice Samuel Alito. Interspersed with these interviews and discussions are visits to the places where Marshall lived, the states affected by his rulings, and performances by actors of brief highlights from Marshall’s rulings and from people like the famous Daniel Webster, who argued repeatedly before the high court. The use of the actors is very strong. They do a good job of bringing these famous historical figures to life. The movie is a bit long, however, clocking in at nearly two and one-half hours. The conflicts between Marshall and Jefferson and Marshall and President Andrew Jackson are a major dramatic theme throughout the movie, but they are set within an academic discussion of Marshall’s public life. Sadly, Chief Justice Marshall and his cousin, President Jefferson, hated one another. The movie is accompanied by a great, dynamic semi-classical score by John Keltonic, but the filmmakers keep the soundtrack extremely low, perhaps too low.

JOHN MARSHALL has a strong moral worldview, with very strong Pro-American elements venerating the United States Constitution. As such, it supports Marshall’s high view of the Constitution as the supreme human law of the United States. However, the movie doesn’t mention that most, if not all, of the Founding Fathers also believed that God’s Law was even higher than the Constitution and could be found in both the natural laws of human nature as God created it and in the special divine revelation of the Holy Bible, the Word of God written. The movie also doesn’t discuss the Tenth Amendment of the Constitution, which gives broad powers to the state governments. According to some scholars (see, for example, Kurt T. Lash, “On the Omission of the Term ‘Expressly’ from the Tenth Amendment,” Building Blocks for Liberty, July 17, 2019, https://buildingblocksforliberty.org/2019/07/on-the-omission-of-the-term-expressly-from-the-tenth-amendment/), Marshall’s understanding of the Tenth Amendment was flawed. A proper understanding of the Tenth Amendment, these scholars argue, should have informed Marshall’s views on the constitutional powers of the federal government. It also would have limited the expansion of the federal government that’s occurred since Marshall’s original rulings, especially since the New Deal in the 1930s. Finally, the movie fails to mention that the Cherokees themselves owned African slaves, which they took with them when they were forced to move to Oklahoma. It’s also important to mention that, at the time, President Jackson feared that, if he enforced Marshall’s ruling against the state of Georgia in favor of the Cherokee, it could lead to open warfare between federal troops and Georgia militia and perhaps begin a broader civil war. Of course, the Indian Removal Act of 1830 was very popular among voters.

Otherwise, however, JOHN MARSHALL: THE MAN WHO MADE THE SUPREME COURT seems to be a fair presentation of the powerful, influential judicial career of Marshall as Chief Justice. Also, to be fair, it should be noted that so-called “judicial activists,” who often insert their own personal liberal/leftist views into the text of the Constitution, love to take Marshall’s words out of context to support their unconstitutional rulings and programs of social engineering and to ignore Marshall’s words when they undermine their positions (see Pages 428-433 of Raoul Berger’s GOVERNMENT BY JUDICIARY, Second Edition [Indianapolis: Liberty Fund, 1997], http://oll-resources.s3.amazonaws.com/titles/675/0003_Bk.pdf).