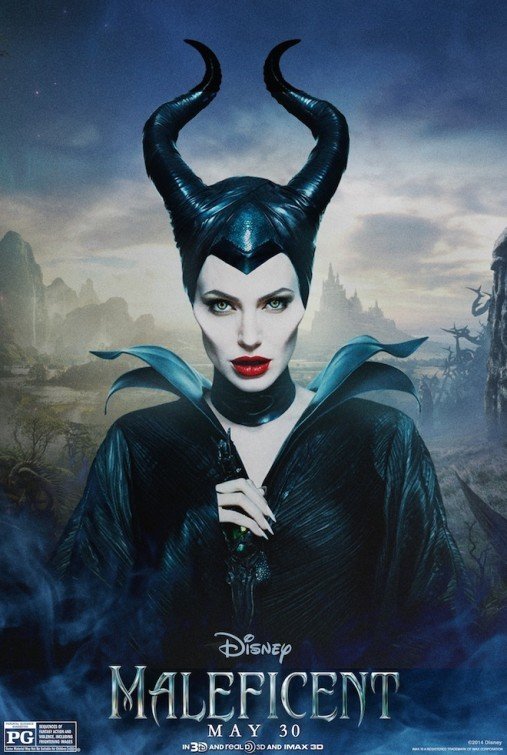 MALEFICENT is a dark version of Sleeping Beauty. Angelina Jolie plays the title character. Maleficent is one of the strongest fairies in the forest, with large wings and magical powers. She falls in love with a farm boy named Stefan, but Stefan never returns to the forest. When Maleficent fatally wounds the king to protect the forest, Stefan cuts off Maleficent’s wings to become the new king. He marries and has a baby girl, Aurora. In revenge, Maleficent puts a curse on Aurora, saying she will die at age 16 if she doesn’t receive a true love’s kiss. Stefan tries to hide Aurora in a far away forest, raised by three silly fairies. Not long after, Maleficent finds Aurora. Aurora’s joyful heart changes Maleficent’s own heart, but there’s no stopping the curse.

MALEFICENT is a very dark portrayal of Sleeping Beauty. The real villain turns out to be the father. Also, there’s an environmentalist message where mankind is the problem. MALEFICENT has some plot holes but otherwise is well-made. However, it’s too scary for children. Movieguide® advises extreme caution for MALEFICENT.

(PaPa, O, B, C, PCPC, EE, VV, N, MM) Strong, slightly mixed pagan worldview with father as the villain and some occult use of dark magic, but some light moral, redemptive content where title character softens her anger and desire for revenge because of younger girl’s joy and love, whom she eventually befriends, plus strong politically correct environmentalist content where mankind is the bad guy; no foul language or profanities; woman slaps another woman, slapstick humor involving three silly women, war scene with soldiers flown into the air and crushed, scary forest animals fight soldiers, wings are cut off from fairy and the after pain is shown, scary dragon spits fire, and other miscellaneous violence; no sex scenes, but two light kissing scenes; upper male nudity but dirt covers character; no alcohol; no smoking; and, strong miscellaneous immorality includes poison used to make woman fall asleep, father is the villain, greed, envy, and revenge.

Maleficent, played by Angelina Jolie, is one of the strongest fairies in the forest, with large wings to support her and her magical powers. As a young fairy, she meets Stefan, a boy wandering through the forest. Stefan tells her he will come back to see her, but he has great hopes to one day end up in the castle, even though he is from a farming family.

As the two grow up, they fall in love. Stefan even gives Maleficent a “true love’s kiss” on her 16th birthday. Years pass, however, and Stefan doesn’t return after the kiss, but instead goes to work in the castle.

When the king goes to take down the forest where Maleficent lives, she tries to protect the forest. A war begins, and Maleficent ends up seriously wounding the king while protecting her forest. This leads the king to his deathbed, where he tells his soldiers that whoever kills Maleficent will be his successor to the throne.

Stefan hears this and goes to find Maleficent. He almost kills her but instead cuts off her wings. Returning the wings to the king, Stefan will now reign as king once the king dies.

Years pass, and Stefan becomes king, marries and has a baby. Heartbroken, Maleficent goes to the christening of the baby to make an impact. With a vengeful heart, Maleficent puts a curse on the baby girl named Aurora, saying she will die on her 16th birthday unless she receives a true love’s kiss.

From this point onward, Stefan is completely fixated on protecting his daughter and killing Maleficent. Aurora is taken to the forest to be hidden from Maleficent and raised by three silly fairies. However, Maleficent easily finds Aurora. Surprisingly, Maleficent’s heart is changed by Aurora, who brings joy and love, but there is no stopping the curse or Stefan.

MALEFICENT is a very dark portrayal of Sleeping Beauty. The movie will confuse viewers about who the villain is. Although Maleficent has put a curse upon Aurora, her heart is changed, but she still uses magic. Then, toward the end of the movie, the villain becomes Stefan, the father, who wants to take down the forest and kill Maleficent. This leaves viewers confused on who’s the real hero. Though you would like to root for Maleficent, she is a very dark and scary character who uses dark magic. Of course, the concept of a villainous father is not a good concept at all. In fact, the father gets more evil as the story goes along. Finally, there’s an environmentalist message to the movie where mankind is the problem, destroying the forest and bringing in iron, which hurts the fairies.

MALEFICENT has some plot holes, but otherwise is a well-made movie with good special effects and costumes. However, it’s an extremely scary movie for children. Though seemingly aimed at families because of its PG rating, this is not a family-friendly fantasy. The audience for the movie is a big question. MOVIEGUIDE® advises extreme caution for MALEFICENT.