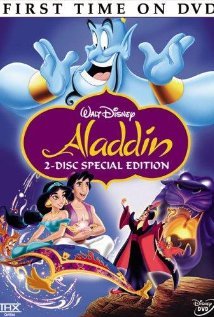 ALADDIN follows the rags-to-riches story of a resourceful "diamond in the rough" who uses the help of a Genie to save the mythical kingdom of Agrabah and win the heart of a princess. ALADDIN is a sweet cinematic confection bursting with kinetic energy and firmly grounded in the message of the importance of personal honesty and integrity. ALADDIN contains fairy-tale magic which is shown to be unsatisfying compared to true love and personal honesty. Some scenes may be too intense for very young children though none of them have the violence of the wolf-pack scene in BEAUTY AND THE BEAST.

(B, C, VV, O) Truth triumphs in the movie ALADDIN which contains classic fairy-tale magic, including hypnotism, levitation (of the magic carpet variety), a Genie who grants wishes, & an evil sorcerer who turns into a snake, as well as some violence. However, these magical elements are clearly shown to be inferior and unsatisfying compared to true love and personal honesty, which includes repentance and forgiveness. Some scenes, such as the aforementioned snake transformation and the conjuring of the Cave of Wonders, may be too intense for very young children.

ALADDIN follows the rags-to-riches story of a resourceful young “diamond in the rough” who is recruited by the Sultan’s evil vizier Jefar to help retrieve a magical lamp from deep within the “Cave of Wonders.” Aladdin gets possession of the lamp and conjures up a wisecracking Genie who offers him three wishes. Wanting to impress the Princess Jasmine but fearing to be honest, Aladdin has the Genie turn him into the magnificent Prince Ali, only to find that the Princess rejects this false face as readily as she has rejected other arrogant suitors. Thus, the fundamental message of ALADDIN is the importance of accurately representing oneself, rather than putting on pretensions.

ALADDIN, like BEAUTY AND THE BEAST, uses magic liberally as a plot device, but the movies’ moral context provides a responsible balance. Also, the name of Allah is used as an Arabian cultural touchstone and not a religious endorsement. Brilliant characterizations combine with state-of-the-art animation to bring ALADDIN to vibrant life. Particularly impressive is Robin Williams’ virtuoso performance as the voice of the Genie. Like the best animated classics, ALADDIN’s humor will appeal to both children and adults. However, some scenes (such as the emergence of the Cave of Wonders and Jefar’s turning into a huge snake) are very intense and may frighten very young children. Fortunately, these scenes are very few. ALADDIN is a sure hit and a sweet cinematic confection bursting with kinetic energy and firmly grounded in the message of the importance of personal honesty and integrity.