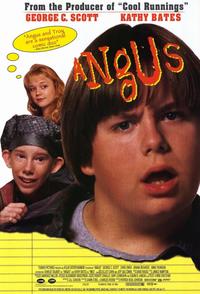 The movie ANGUS tells the story of a boy with the same name who has been ridiculed all his life by debonair Rick Sanford. Rick sets up Angus to receive, as a joke, the King's crown at his high school Freshman Winter Ball. Angus must decide to whether or not to attend the Ball and risk embarrassment. Though a crowd pleaser, this movie suffers from some weak dialogue and excessive foul language.

The movie ANGUS tells the story of Angus Bethune, a large intelligent but unpopular freshman at high school. All his life, he has been overshadowed and ridiculed by the debonair, golden boy quarterback Rick Sanford. At a school rally, Rick sets up Angus to receive, as a joke, the King’s crown at the Freshman Winter Ball, an honor which places Angus at the side of his secret love Melissa Lefevre, class beauty, cheerleader and designated Queen of the Ball. Overcome with fear, Angus must decide to ditch the Winter Ball, or attend the ball and risk embarrassment in front of the whole school. At the ball, ANGUS receives the humiliation of his life, but tests his “Bethune Theory” on acceptance, becomes a champion to his classmates and heaps humiliation on Rick. “The Bethune Theory” postulates that there is no such thing as normal.

The movie demonstrates that people come in all sizes, shapes, and colors and that high school needs to accommodate them. This theme sticks-up for the little guy who is willing to stick out his neck for acceptance. Though a crowd pleaser, this movie suffers from some weak dialogue by the older actors and some stagy, contrived moments for the younger actors. It is also marred by an excessive amount of bad language becoming an ironic contrast to an otherwise upbeat movie.

Writer: Jill Gordon BASED ON A STORY BY: Chris Crutcher