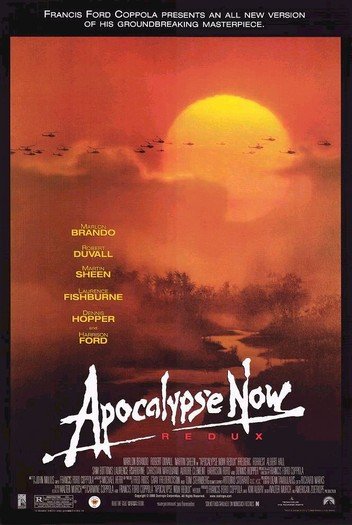 Francis Ford Coppola has released APOCALYPSE NOW REDUX, a new version of his provocative movie about the Vietnam War, with many new scenes. In the story, Martin Sheen plays a young military intelligence officer ordered to assassinate a rogue colonel, played by Marlon Brando, who has decided that the only way to win the war is to slaughter and torture as many Communists as possible.

Morally, spiritually and politically, APOCALYPSE NOW REDUX is a mess. Not only does Coppola add sexual immorality and nudity to his violent, foul-mouthed movie, he also fails to resolve the problems he sets up in the story. At times, the new version looks like it’s going to make some good moral and political points about the Vietnam War, but then Coppola’s weird sensibilities clash with co-screenwriter John Milius’s more conservative, but pagan (and sometimes Nietzschean), philosophy. Brando’s character and performance remain among the most enigmatic, frustrating, but fascinating, elements on film. Ultimately, of course, without God, Jesus Christ and a full, active, truthful knowledge of the Word of God, the Bible, total victory will remain elusive, not only in the cinema but also in the next world.

(PaPaPa, B, C, H, AC, Co, P, APAP, LLL, VVV, SS, NN, AA, DD, M) Arty pagan worldview with some moral elements, a scene of priest leading a prayer service & a scene of indigenous Asian natives ritually slaughtering a cow, but no focus on God or Jesus Christ in the rest of the movie, except by way of profanity, plus some anti-Communist & pro-Communist elements & a conflicting sense of patriotism & anti-Americanism, all of which appear to finally resolve itself into a tragic view of the Vietnam War that fails to grasp some of the outcomes & lessons of that conflict (see MOVIEGUIDE®’s full review); at least 194 mostly strong obscenities & 30 mostly strong profanities, plus a couple obscene gestures; extreme, sometimes graphic, war violence such as people shot, explosions, mortar fire, images of people lying bleeding, images of corpses, man drops the head of one dead soldier into another soldier’s lap, implied torture, man tied up, soldier kills man with a machete, plus indigenous Asian natives ritually slaughter a cow in graphic, gory detail; Playboy “bunnies” in bikini outfits dance suggestively, implied adultery, soldiers partially undress & fondle Playboy women in another scene, & at least one soldier lies on top of one naked woman; extensive shots of upper female nudity including photo from Playboy magazine, soldier lies partially nude in bed while talking to woman, plus rear male nudity & male soldiers take their shirts off frequently in tropical heat; alcohol use & drunkenness; depicted smoking, marijuana smoking & opium smoking; and, assassination, American officers & soldiers display bad military judgment, amoral & immoral actions during wartime, & officer cares more about surfing than he does for the safety of his men.

Many critics have hailed APOCALYPSE NOW, Francis Ford Coppola’s strange, sometimes hypnotic and sometimes brilliant take on the Vietnam War, as one of the best war movies ever made, if not the very best. Other critics, however, have been less impressed. This summer, Coppola has released a new version of the movie, with extensively new, never seen before, scenes that, frankly, are a mixed blessing.

In the movie, originally released in 1979, Martin Sheen (of TV’s WEST WING) plays Captain Willard, a young military intelligence officer during the Vietnam War who happens to be an adept assassin. A general orders Willard down a river into Cambodia to assassinate a rogue colonel, played by Marlon Brando, who has decided that the only way to win the war is to slaughter and torture as many Communist soldiers, and civilian sympathizers, as possible. Col. Kurtz has gathered a group of Cambodian tribesmen and other rogue American soldiers to accomplish this goal. On the way there, Willard discovers that the Americans are running the war in an extremely disorganized fashion. He begins to sympathize with Col. Kurtz and becomes anxious to see what’s really happening at Col. Kurtz’s compound in Cambodia.

Taking Willard down the river is a group of young Navy soldiers headed by an older black American soldier called Chief. One of the things Willard notices as he travels with these men, and as he encounters other American soldiers, is that most of the Americans have tried to make Vietnam too much like home, thereby losing their fighting edge.

Eventually, only Willard and two other men survive the trip to Kurtz’s compound. While there, Willard has a series of weird, sometimes confrontational, sessions with the strange colonel, which leads to a final violent dilemma for the young officer. At the compound, Willard discovers bunches of slaughtered people and a strange talkative photo journalist (played wonderfully by Dennis Hopper), who thinks Kurtz is some kind of a God, figuratively speaking.

Among the additional scenes to APOCALYPSE NOW are more scenes involving a crazy Lt. Colonel Kilgore, a slightly loony officer played brilliantly by Robert Duvall in one of the best performances ever put on film. These scenes better explain Duvall’s character and provide a more complete transition to the rest of the movie. The movie also includes more narration by Capt. Willard that better explains the military and political motivations behind Col. Kurtz’s self-exile to the jungle. Another added sequence is a somewhat confusing sexual sojourn with some naked Playboy models by two of the soldiers traveling with Willard. Finally, Willard and the men encounter some holdovers from the French colonial days in Southeast Asia, including a pretty Frenchwoman. Eventually, the woman takes off her clothes in an implied adultery scene with Willard, who’s a bit estranged from his wife in America because of his brutal, crazy wartime experiences. The scenes at the French plantation apparently give Willard even more perspective on the Vietnam War, but some of the French accents were very hard to decipher in just one viewing of this special edition. The upshot of these scenes, however, is that a country wins a war by sticking together and by making sure its soldiers don’t lose heart.

As implied above, some of the additional scenes and dialogue help better explain the motivations not only of Duvall and Brando’s characters, but also Sheen’s character. They also provide a more natural transition between the other sequences in APOCALYPSE NOW. What they don’t do, however, is fix the often silly and perplexing, and overly violent, ending to the movie when Willard and Kurtz finally confront one another. The final gruesome scenes are among the most perplexing and ridiculous of all, full of confused and ambiguous literary allusions that don’t seem to lead anywhere really intelligent or aesthetically satisfying. Of course, the additional sex and nude scenes in this movie are strongly immoral, but they are also mostly gratuitous because they do little or nothing to further the plot.

Morally, spiritually and politically, APOCALYPSE NOW REDUX is a big mess, although it remains a provocative work of art. Not only does Coppola add strong sexual immorality and nudity to his violent, foul-mouthed movie, he also fails to satisfactorily resolve the moral, spiritual and political problems he sets up in the story. At times, the new version looks like it’s going to make some good, even conservative, moral and political points about the Vietnam War, but then Coppola’s weird, left-leaning sensibilities begin to clash with co-screenwriter John Milius’s (FAREWELL TO THE KING, THE WIND AND THE LION, RED DAWN, and CONAN THE BARBARIAN) more conservative, but pagan (and sometimes Nietzschean), philosophy. Finally, Brando’s character and performance remain among the most enigmatic, frustrating, but fascinating, elements ever put on celluloid.

In reality, of course, there are many important moral, spiritual and political lessons we can draw from the Vietnam War, depending upon one’s worldview. From a conservative Christian and biblical perspective, the fight against godless Communism in Southeast Asia and elsewhere was a very moral and noble cause, especially since the Communists in Cambodia and Vietnam put millions of people in Nazi-like concentration camps and indulged in mass political murder and genocide. Furthermore, the war may have eventually led to more democratic forms of government in Taiwan and South Korea, and helped protect not only Hong Kong, Taiwan and South Korea, but also millions of Christians in Southeast Asia, especially Korea and perhaps even the Philippines. Finally, the Vietnam War reminds us, as does the new version of APOCALYPSE NOW, that without God, Jesus Christ and a full, active, truthful knowledge of the Word of God, the Bible, total victory will remain elusive, not only in this world but also in the next one.