BENEFIT OF THE DOUBT 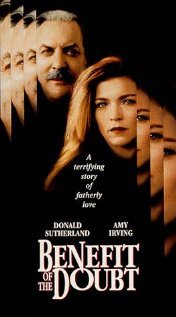 Released on parole for killing his wife, a father goes back home to live with his daughter whom he had molested as a child in BENEFIT OF THE DOUBT. A rather predictable plot ends with a weak chase scene.

In BENEFIT OF THE DOUBT, a convicted killer Frank, goes before the parole board. Frank has served seventeen years for the murder of his wife. After his release, Frank spies on his daughter, Karen, working as a waitress in a topless bar. She is a single mother with a young son. Frank had molested his daughter when she was a child. He becomes jealous when he learns that she plans to marry Dan, so he kills him. In several flashbacks, Karen realizes that Frank killed his wife when she threatened to expose him for his perversion, and he has returned to continue the molestation.

There is little suspense in this suspense melodrama. The viewer vaguely suspects from the beginning that Frank is up to no good. His actions are therefore predictable and even cliched; especially in the scenes depicting his friendly overtures to his grandson. The chase scene at the end is particularly boring. It is a shame that Sutherland and Irving’s extraordinary talents were wasted in this less than ordinary thriller.

Writer: Jeffrey Polman & Christopher Keyser BASED ON THE STORY BY: Michael Lieber