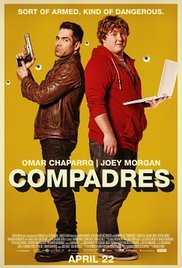 COMPADRES, an action comedy in English and Spanish, takes place primarily in Mexico. Garza, a police officer, is dealing with his partner’s death. He begins an affair with a barmaid, Maria. Just as he learns Maria’s pregnant, Garza comes home to find her kidnapped by Santos, the man who killed his partner. Garza is framed by Santos and put in jail for a short time, stripped of his badge. Once out, he’s smuggled across the border to San Diego in search of “The Accountant,” who betrayed Santos and stole his money. The Accountant is17-year-old Vic, a computer genius. Vic reluctantly agrees to help Garza track down Santos and rescue Maria.

COMPADRES is edited haphazardly, cutting between different times and plots. Even when paying close attention, the story’s hard to follow. Little explanation is given to events, leaving viewers feeling bewildered rather than satisfied. The movie’s content starts out as deplorable and only gets worse. There are some funny moments, and Joey Morgan’s performance as the hacker stands out. However, there’s simply too much violence, foul language and crude content in COMPADRES.

(PaPa, BH, Ho, AP, B, LLL, VVV, SS, N, A, D, MM) Strong mixed pagan worldview with some moral elements in the sense of that primarily secular worldview; two men feign being homosexual in one scene; some Anti-American comments are made; a man is asked if he believes in God, but no reply is given, and some moral elements in the sense that the good guys triumph over the bad guys; at least 51 obscenities and profanities are used, the “B” word is used multiple times, men’s private parts are referred to multiple times, one scene shows a man having diarrhea in the bathroom, one scene shows men sitting on a toilet, a couple scenes depict men urinating while outside, a man is shown vomiting; very strong violence includes multiple scenes showing people being shot and killed, a couple scenes of someone being tortured, a man is set on fire, a man holds a gun to his head in an attempt to commit suicide, a man is beaten with a golf club, multiple fistfights, villain threatens to shoot a pregnant woman in the stomach, a severed finger is used in a scene; depicted fornication, man gropes a woman in her underwear, a man is shown being aroused, a woman wants to work as a prostitute, and a “whorehouse” is referenced; upper male nudity, implied female nudity during sex scene, partial lower male nudity when a man quickly pulls down his pants to sit on a toilet; alcohol use; tobacco smoking but no drug use; and, lying, characters run from cops, man’s gun stolen, man seeks revenge, woman kidnapped, computer hacker steals money, man is illegally smuggled across the border.

In COMPADRES, an action comedy in English and Spanish, a rogue Mexican cop chases after a criminal who kidnaps his girlfriend. COMPADRES fails to tell a coherent story, and is full of crude content, foul language and very strong violence. Extreme caution recommended for all ages.

The movie opens with Mexican police officer, Garza, nursing a beer at a bar as he informs his best friend or compadre and boss, Coronado, that a criminal named Santos has just killed his partner. The barmaid, Maria, catches Garza’s eye. Earlier in the day, his partner’s wife had encouraged him to settle down and begin a family. Now, the thought of being in a serious relationship starts to seem less intimidating than it once did. So, Garza and Maria begin a love affair, and it’s not long before he finds out she’s pregnant. Joyful and a little nervous at the news, Garza returns home that evening to find Maria missing. Immediately, he suspects Santos as the kidnapper.

Garza teams up with the FBI, but Santos cleverly frames Garza for a crime he didn’t commit. Garza is stripped of his badge and must carry out a prison sentence. Coronado manages to get him released, but he’s no longer part of the police force.

Determined to get Maria back, Garza is smuggled across the U.S. border in an attempt to find “The Accountant,” a man Santos hired to handle the financial aspects of his criminal activities. After reaching San Diego, Garza’s surprised to find out the Accountant is an orphaned 17-year-old named Vic, who hacked Santos’ bank account. Santos’ men show up to kill Vic, but Garza fights them off and drags a reluctant Vic back to Mexico.

Though a computer genius, Vic is naive and innocent when it comes to the more repulsive aspects of criminal behavior. For the first time, he’s exposed to dead and tortured bodies, severed body parts, guns and fist fights, and a flame thrower that manages to set not only his house, but a man, on fire. Garza explains that they’re after Santos to get Maria back, so Vic uses his computer knowledge to help track him down.

Having lived his entire life without parents, Vic begins to look up to Garza as a father figure, secretly hoping they can be compadres one day. Garza rejects this idea, telling him that Coronado is his compadre already. Though Vic hides his disappointment, he proves to be a worthy new partner for Garza as the two try to rescue Maria before Santos kills her.

COMPADRES is edited in a haphazard way, cutting back and forth between different times and plots. Even when paying close attention, the story’s hard to follow and seems rushed. Also, little explanation is given to events as they occur. All this often leaves a sense of bewilderment rather than satisfaction. There are a few funny moments, but the movie puts too much stock in bathroom humor and crude jokes. One shining aspect of the movie is Joey Morgan’s performance as Vic. He brilliantly balances humor, disgust, shock, nervousness, boldness, embarrassment, and empathy throughout each scene, easily making him the most authentic character of the bunch.

The content itself starts out deplorable and only gets worse scene by scene. There’s simply too much violence, foul language and crude content for the movie to be truly enjoyable. The movie’s content contains scenes with severed fingers, diarrhea, vomit, torture, extreme violence, and references to premarital sex and prostitution. Although God is briefly mentioned when a character is asked if he believes in God, no answer is given. Ultimately, although the bad guys are defeated, COMNPADRES has a strong, mixed pagan worldview with too much offensive content and violence.