"When a Woman Meets a Boy" 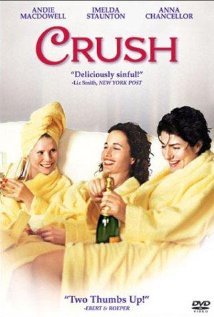 Andie MacDowell stars in CRUSH as Kate, the unlikely American headmistress of a British boarding school in the Cotswolds. Kate spends her spare time with forty-something girlfriends Janine and Molly guzzling gin, smoking cigarettes, eating chocolate, and trashing men. Kate falls in lust with a 25-year-old man named Jed, a former piano student of hers. This causes friction with her girlfriends, especially Molly. Molly goads Janine into interfering. Janine reluctantly agrees with Molly that they must do whatever it takes to stop Kate from marrying Jed. Their plan backfires terribly, however, resulting in tragedy. The rest of the movie explores whether the friendship between the three women can ever be restored.

CRUSH makes a 90-degree turn in the middle, shifting gears from light-hearted chick-flick to blinding tragedy in a surprising turn of events. The movie never completes the turn, however. Without the necessary depth of character for such a drastic switch, the movie ends up wrecked beside the winding English road. CRUSH also contains plenty of strong foul language, sexual content and a homosexual plot twist. Molly’s jealousy of Jed turns out to be a simple case of latent homosexual lust for Kate.

Kate (Andie MacDowell), the unlikely American headmistress of a British boarding school in the Cotswolds, spends her spare time with forty-something girlfriends Janine (Imelda Staunton) and Molly (Anna Chancellor) guzzling gin, smoking cigarettes, eating chocolate, and trashing men as part of their private weekly social club. Janine and Molly want Kate to date the local vicar (played with relish abandon and delightful quirkiness by Bill Paterson), who dotes on Kate. Although she dreams of marriage and babies, the proper headmistress simply isn’t interested in the quirky Scot.

Kate then meets Jed, a substitute organist and her former student, now 25. An hour after meeting, the two are copulating in the cemetery, even as the funeral-goers gather nearby. This is the first of many trysts for the two, who aren’t shy about where-or-when. Janine and Molly thoroughly disapprove, so Kate lies and says she is seeing the vicar instead. When the truth comes out, Kate is far more involved with Jed than she ever dreamed possible. Despite her peers’ abhorrence for the young man (and her own shock at his table manners), Kate accepts Jed’s marriage proposal.

Janine is the frumpy police inspector who reluctantly agrees with Molly that they must do whatever it takes to stop Kate from marrying Jed. Regrettably, this involves Molly trying to seduce Jed, and Janine taping the incident for posterity. Jed isn’t interested, but when Kate walks in on the trio, emotions explode and tragedy follows.

The rest of the film explores Kate’s grief and the destruction of the friendship that had meant so much to her. Rather than focusing on Kate’s relationship with Jed, or any of its moral or practical considerations, the movie is far more interested in the dynamics of female companionship. Regrettably, CRUSH’s young male writer and director has only a superficial, and skewed, understanding of what true friendship involves. As a result, his characters are caricatures.

MacDowell plays her usual Southern sweetheart role, with accompanying gestures, facial expressions and tones. Sadly, while appropriate for many of her films, MacDowell’s stock character does not do the trick in CRUSH, where the audience will long for insight into her hopes, dreams and past. This, of course, is true with all of McKay’s characters, but MacDowell’s acting makes this all the more apparent in CRUSH. Part of the problem lies with the writer, who drops all of his characters into the movie with little thought to their families or backstory. Does anyone have parents in this film? The world will never know.

Imelda Staunton is the frumpy police inspector who allows herself to be coerced by Molly’s shenanigans. Staunton is credible, although like Kate, Janine is fairly one-dimensional. That she takes a cell phone call from Kate, for example, during a police raid, is thoroughly ridiculous. Anna Chancellor as Molly happily shows great depth of character as the manipulative divorcee. She is calculating and coolly cynical, and her portrayal of a thrice-divorced woman was thoroughly believable. Though one may sincerely doubt her change of heart about men at the end of the film, they can appreciate the growth her character exhibits. As Jed, Kenny Doughty is handsome and artistic, but lacks any of the insight or education one would expect from the erudite Kate’s true love. Although Bill Patterson, as the Scottish vicar, is likeable and funny, he injects nary a shred of spiritual wisdom into this emotional chaos.

The story makes a 90-degree turn in the middle of the movie, shifting gears from light-hearted chick-flick to blinding tragedy in a surprising turn of events. Writer/director John McKay never completes the turn, however. Without the necessary depth of character for such a drastic switch, the movie ends up wrecked beside the winding English road, and the audience is left wondering what to feel.

The misguided message of CRUSH is that love and lust are not only interchangeable, but synonyms. The audience is clearly expected to agree that Kate and Jed had a valid, sustainable relationship, even though they had nothing in common but passionate sex. That notion is naïve at best, and dangerous at worst. Sex is the part of the glue of a good marriage, not the foundation. Furthermore, true love, the kind of unconditional, sacrificial love that Christ demonstrated on the Cross, has nothing to do with lust.

The only saving grace of CRUSH is the beauty of the English Cotswolds, from the rolling green hills and summer fields where Kate and Jed play to the overgrown graveyard where they have their first romp. All were portrayed beautifully by cinematographer Henry Braham. Even so, underneath this thin veneer of splendor lies a group of miserable women struggling for a shard of happiness and willing to do whatever it takes to get it. A dismal outlook on life, no matter where you live.

Rating: R for sexuality and language