"Are You Ready for Some Pressure?" 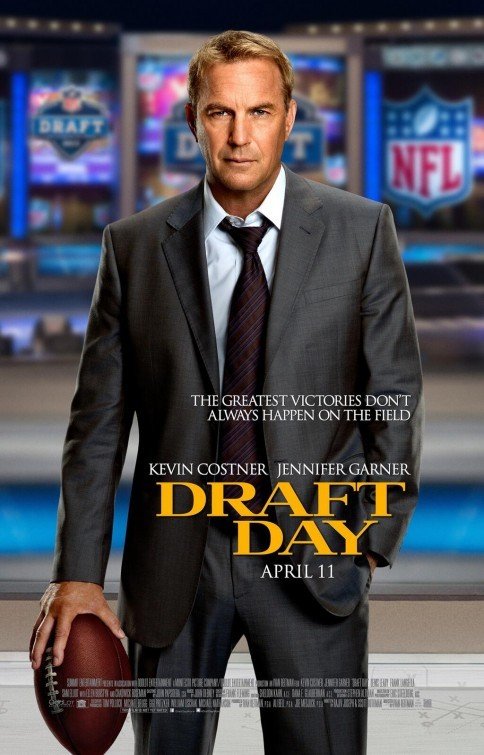 DRAFT DAY stars Kevin Costner as Sonny Weaver, the general manager of the Cleveland Browns football team. It’s Draft Day in the National Football League, when teams pick the top football prospects. On the day Sonny must make some of the most important decisions of the year regarding his team, conflict raises its ugly head everywhere he turns. His girlfriend is upset, his head coach is upset, the owner is tightening the screws, his players are upset, and even his mother is upset. In this context, Sonny has to make all the perfect decisions, make everybody happy, and negotiate his way to a major win for his team.

The script for DRAFT DAY is occasionally plodding and lacking passion. The pacing is slower than one might expect. Also, foul language occurring throughout the movie mars the overall presentation. Although lacking a biblical framework, the movie conveys a strong positive message where moral character, honesty and love are more important than raw talent and the profit motive. Despite the lack of passion, DRAFT DAY is still pleasant, interesting, and informative to watch.

(H, B, LLL, V, S, A, M) Light humanist worldview with some moral elements where characters are guided by accepted social mores (with no apparent reference to God as the Supreme Being guiding decisions and behavior), but moral character is more valuable than physical prowess, and it pays to do the right thing; at least 38 obscenities and 19 profanities; violence is suggested and also occurs against objects rather than people in fits of anger and frustration; some sexual references includes an extramarital affair is lightly portrayed, and one romantic kiss occurs; no nudity; brief alcohol use; no smoking or drug use; and, a football player is a bad role model.

When the mention of a “draft day” is heard, it might elicit a moment of confusion as one tries to establish whether it has something to do with the military, their checking account, or oh yes, the once a year event when top college football stars are “picked” to play in professional football and offered huge lucrative contracts. DRAFT DAY, the movie, gives casual football fans and others an interesting insight into what goes on behind the scenes in a football franchise, not only with the players and coaches, but also with the overall business of major league football.

The movie opens on draft day for the National Football League in New York City. As preparations are made at the iconic Radio City Music Hall, a digital clock in the corner of the frame is counting down with about 12 hours to go to the big event. Cut to the city of Cleveland where Sonny Weaver (Kevin Costner), the Browns’ General Manager, is starting off his day with the realization that in a few hours the choices he makes will either strengthen his team and put the organization on its way to a winning season, even the Super Bowl and glory, or conversely, straight to the tank with its painful consequences of loss and recrimination. In fact, Sonny’s very own job may wind up on the chopping block as well.

It’s beginning to look like this year’s first round pick will be Bo Callahan (Josh Pence), a red hot quarterback who’s not only a superstar on the field but a darling of the fans, and especially the female kind. Mr. Anthony Molina (Frank Langella) is the Brown’s owner. He’s looking to make a big splash by signing the dazzling jock and start racking in the dollars for the franchise. However, Sonny isn’t so sure this will be the right thing to do because, even if they could get Callahan, the acquisition will probably come at a very high price in the way of future picks and/or losing some of his starting players. In this context Sonny has to navigate his way through a sea of possible deals, offers, and counter offers by the other teams, while listening to the concerns of players whose lives and careers are on the line.

Meanwhile, the argumentative head coach, Penn (Dennis Leary), gives Sonny contrary ideas. Also, Ali (Jennifer Garner), Sonny’s sleep-in girlfriend, decides to pick Draft Day of all days to let Sonny know that she’s pregnant with his baby. Even Sonny’s mother, Barb (Ellen Burstyn), gets in on the act by showing up at the office carrying her recently deceased husband’s ashes so Sonny can help her scatter them on the play field as he recites a manuscript the previous General Manager wrote before passing away. In short, Sonny’s mother is upset, his starting quarterback is upset, his head coach is upset, his girlfriend is upset, and his boss will fire him if he makes the wrong choice.

What is Sonny to do as the digital clock ticks down in the corner of the screen?

Given the magnitude of the simultaneous conflicts and interlaced issues on the biggest day in major league football other than the Super Bowl, a natural expectation would have been for the audience to be on the edge of their seats as the tension built to the much anticipated final climax. For whatever reason, Director Ivan Reitman (GHOSTBUSTERS, TWINS, KINDERGARTEN COP) either by purpose or in spite of it, gives viewers a rather slow, plodding rendition more akin a run of the mill impersonal documentary than a dramatic, tension driven, pressure cooker in a race against time and overwhelming odds.

To be fair, Costner deserves his share of blame for providing an uncharacteristically wooden performance, which to various degrees is replicated by his counterparts in the other teams. Are all professional football executives that cool under pressure? Well, perhaps, and it is true that some people are able to remain cool as ice under incredible stress and all types of pressure, but in a movie setting like this, a little more passion and nuance may have gone a long way to provide some additional dynamics to this otherwise strangely lukewarm presentation. Jennifer Garner helps in this regard, but only with partial success, as well as Ellen Burstyn, who in no matter what role she may be cast always manages to highlight her solid thespian pedigree. The rest of the cast is serviceable, but football fans may get a kick, no pun intended, out of seeing brief appearances by football greats like Deion Sanders and Arian Foster.

With all of its shortcomings notwithstanding, such as a steady stream of obscenities and profanities, the rather slow pace, by-the-numbers performances, and an uninspired script, DRAFT DAY is a rather pleasant movie to see, and still interesting and informative. More importantly, it conveys a clear, positive messages that it pays to do the right thing, and that moral character is more valuable than physical prowess. All in all, DRAFT DAY somehow manages to pull a few heartstrings. That alone actually goes a long way in keeping it out of flop territory and making it worth the price of admission.