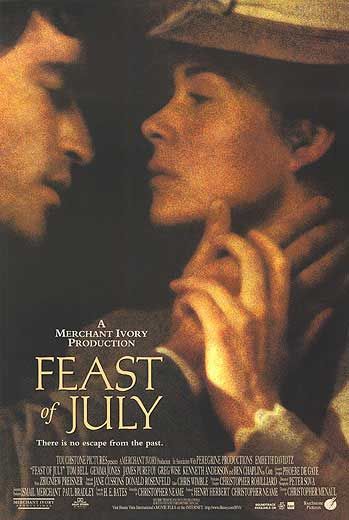 The sadness of love lost is examined in the beautiful and moving film called FEAST OF JULY. A Merchant Ivory production, it tells the story of Isabella Ford, a turn-of-the-century English woman who loves and looses two men. Brooding, it powerfully shows the penalty of sin within a Christian worldview.

In FEAST OF JULY, Bella Ford is a woman betrayed by her lover Archie Wilson. He leaves her, and she gives birth to a stillborn child. She searches for Archie, but collapses at the foot of a kind man named Mr. Wainwright. He invites her back to his home and introduces her to his wife and three sons, Jed, Matty and Con. Bella soon becomes the object of attention from all three sons, but Con eventually wins her. Trying to forget her past, Bella goes out boating with Con. They encounter Archie Wilson fishing. When Archie taunts them, Con kills Archie. The two decide to flee to Ireland. However, when morning comes, Con decides to turn himself in to the police. Bella pleads for him not to do so, but he does. As Con faces the gallows, Bella sails off to Ireland with his unborn child.

This movie is emotionally moving because we care so much about the characters. Con and his family pray, go to church and seem to love each other. Apparently in Christ, their faith and restraint should have prevented disaster, but, like King David of old, this movie tells the story of people who want to live holy lives under God but pay the price for unbridled passions. Although the movie contains some violence and sexual situations, it is all done with great restraint. The film powerfully shows the penalty of sin within a Christian worldview.

Writer: Christopher Neame BASED ON A NOVEL BY: H.E. Bates